Home International Kim up for the challenge at SMBC Singapore Open 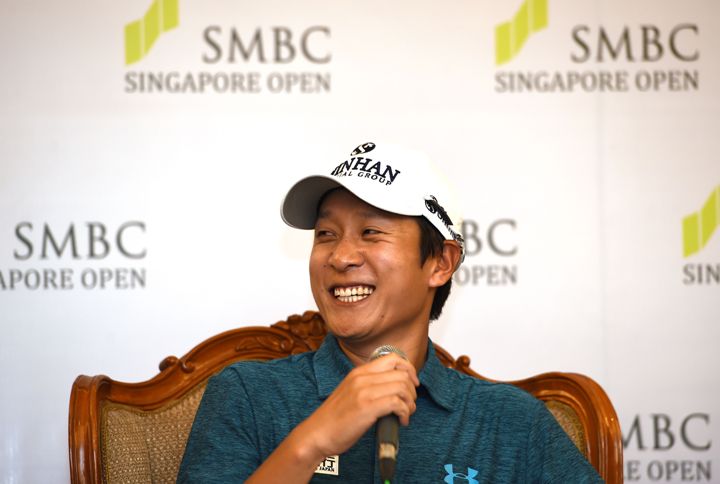 Korea’s K.T. Kim will be looking to gain the upper hand over the rest of the elite field when the SMBC Singapore Open gets underway at the Serapong Course, Sentosa Golf Club on Thursday.

Kim will tee off alongside world number one Jordan Spieth of the United States as well as Japan’s Yusaku Miyazato in the opening two rounds at the iconic Singapore showpiece which is making a welcome return after a three-year absence.

The Korean enjoyed a phenomenal season on the Japan Golf Tour Organisation (JGTO) in 2015 where he won on five occasions.

He also claimed the scalp of world number 34 Bernd Wiesberger at the recent EurAsia Cup, winning his singles match 3&2 and is looking to continue his good form at the Lion City this week.

“I’m up for a good challenge, especially playing with Jordan in the first two rounds. Competing against the world number one is always exciting. I’ll be watching how he putts as I know he’s very good with his short game. But I can also play some good golf,” said Kim.

Kim has already mapped out his strategy on how to tame the challenging 7,398 yards, par 71 course.

“I’m playing here for the fourth time. The rough is not as high and thick as before but the distance is longer now. So you need good distance control especially when playing against the wind,” said Kim.

Major winner Darren Clarke of Northern Ireland, who is also part of the stellar field at the SMBC Singapore Open, also agreed with Kim’s assessment of the Serapong Course and is wary of the stiff challenge that lies ahead.

“As I am getting older, I don’t like to see tees going backwards but go forward. But the course is fantastic.

“There are also some holes which can be very challenging. You can take a bit of a gamble if you want, but you’ll be in trouble if you get it wrong,” said the 47-year-old.

Besides the course, the globetrotting Clarke is also hoping to combat jetlag which is proving to be another challenge for the 2011 Open Championship winner.

“It’s never easy you know. I thought I would have come up with some system for jetlag considering I’ve been doing this for so long. But I still wake up in the middle of the night like everybody else. When I went back after Malaysia (EurAsia Cup), I was home for three days and then I was off to America.

“But there are lots of fans in Asia and I always enjoy being in Asia, so it’s always good to come back. Also, there are some of the best courses in this part of the world too,” said Clarke.