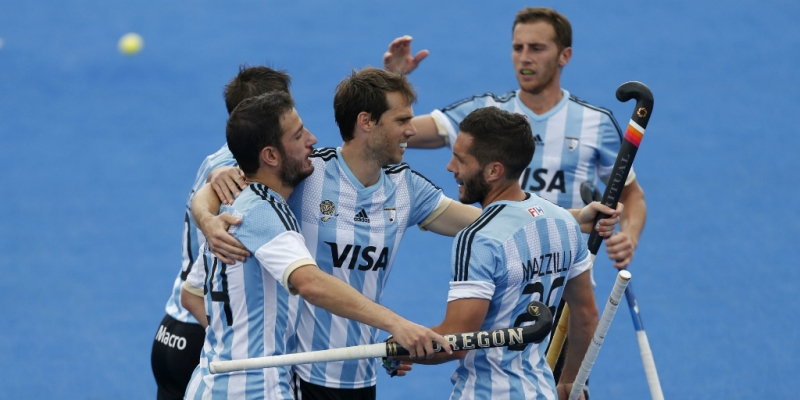 The final of the Odisha Men’s Hockey World League Final Bhubaneswar 2017 will be a mouth-watering clash between the respective world and Olympic champions, with Australia set to meet Rio 2016 gold medallists Argentina in the championship match on Sunday.

Australia overcame stern resistance from Germany to emerge with a 3-0 win to maintain their hopes of defending the Hockey World League title that they won in Lucknow two years ago, setting up a clash with Los Loenes, the top ranked team in the game.

The Pool B meeting between Australia (FIH Hero World Ranking: 2) and Germany (WR: 5) finished with the scores locked together at 2-2, hinting that their semi-final rematch could also be a close one.

However, Germany’s chances of success were hampered by the fact that they were missing five players from their squad, with one being injured and the others being unable to play due to illness.

Despite having only 13 players fit for action – one of which was reserve goalkeeper Mark Appel, who was used as an outfield substitute – Die Honamas produced a startling performance, matching their opponents in the opening period and coming close to opening the scoring with a penalty corner that was brilliantly saved by the outstretched foot of Australia goalkeeper Tyler Lovell.

Germany’s depleted squad somehow reached half time with the match scoreless but found the third and fourth quarters tough going as the constant Australian running began to take its toll on Germany’s rapidly tiring legs.

Germany’s stubborn resistance finally broke with three minutes of the third quarter remaining, with Dylan Wotherspoon smashing a glorious backhand strike into the bottom corner from a tight angle following a period of dominance from the mighty Kookaburras.

Jeremy Hayward moved his side even closer to a place in the competition final with a trademark penalty corner drag-flick goal early in the final quarter before Germany went for broke, replacing their goalkeeper with an outfield player in order to have one last attempt to crack open Australia’s defence. It was a tactic which almost paid dividends, with Australia blocking out two penalty corner efforts before a rapid counter-attack killed the game.

Tom Wickham was the scorer of Australia’s third goal, tapping into an empty net to leave Australia one victory away from defending their Hockey World League title.

“I think we can be proud of our performance today”, said Germany’s Philipp Huber, who was named Man of the Match, presented by Odisha New Opportunities after the game. “We came into the game thinking that we had nothing to lose. It was tight sometimes, and we thought if we could score a corner maybe we could get ahead but it wasn’t to be.”

Earlier in the day, Belgium’s Red Lions ended their Hockey World League Final campaign on a positive note with a 1-0 victory over Spain to claim a fifth place finish in the competition.

The Red Sticks of Spain hit the post on two occasions in the match and could count themselves unlucky to finish as the losing side, but a brilliant precision strike from Sebastien Dockier in the fourth minute proved to be the difference.

Speaking after the game, Spain’s Josep Romeu – who was named Man of the Match, Presented by Odisha New Opportunities – said: “We were not happy with how we played against Belgium in the pool match. We had our chances to win today but it did not quite work out.”