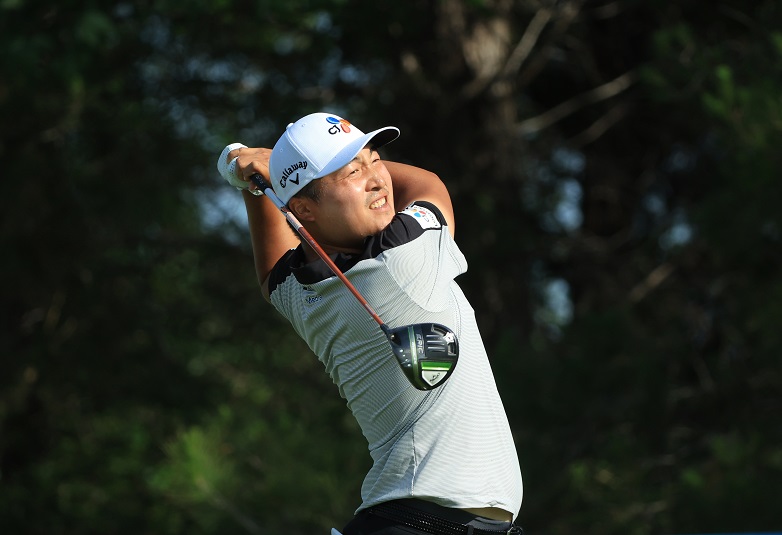 Korea’s K.H. Lee kept up his bid to join an illustrious group of players to successfully defend at the AT&T Byron Nelson following a battling 4-under 68 on Friday which kept him three strokes off the lead at TPC Craig Ranch.

The 30-year-old Lee, who opened with a fine 64 on Thursday, birdied all the par 5s in the second round of the US$9.1 million PGA TOUR tournament but two bogeys on the card left him in tied sixth place heading into the weekend.

Lee knows he has a great chance to put his name alongside some of golf’s legends.

“My goal is to secure a good position until the final round and try to get a chance for a win,” said Lee, who holds a 36-hole aggregate of 12-under 132.

Ryan Palmer (62), David Skinns (63) and overnight leader Sebastian Munoz (69) share the lead on 15-under, with Justin Lower lying a shot back following a 66. Japanese star Hideki Matsuyama, currently fifth on the FedExCup standings, carded a bogey-free 66 for 11-under while Thailand’s Kiradech Aphibarnrat birdied his closing hole for a 70 to make the cut right on the number at 5-under.

Starting the day alongside World No. 1 Scottie Scheffler and hometown hero Jordan Spieth from the 10th, Lee navigated the par 5s on the 12th, 18th, 5th and 9th holes expertly with routine birdies. He holed several lengthy putts from 17 feet and 18 feet for further gains on the eighth and 15th holes respectively and said a par save on his first hole of the day was pivotal.

“Tee time was pretty early and I’m a little tired in the morning. So starting was quite tough but I make like a seven feet putt, make par, so that gave me some momentum. I felt like I played well, so I am happy,” said Lee.

“Yesterday felt harder. This morning on our first nine, there wasn’t much wind and second nine was windier and I got a little confused and it makes it more difficult with distance control. But, yeah, it’s good.”

Matsuyama, an eight-time PGA TOUR winner, is making his first start since finishing tied 14th in his defence at the Masters Tournament last month. He pencilled down six birdies for a blemish-free card and was especially pleased with a birdie on No. 11 after he brilliantly punched a shot out from between some trees to six feet of the pin.

“It was very good, I was able to get it done today. The wind was quite strong but I think I was able to deal with it in my own way,” said Matsuyama, who has won twice this season at the ZOZO Championship in Japan and Sony Open in Hawaii.