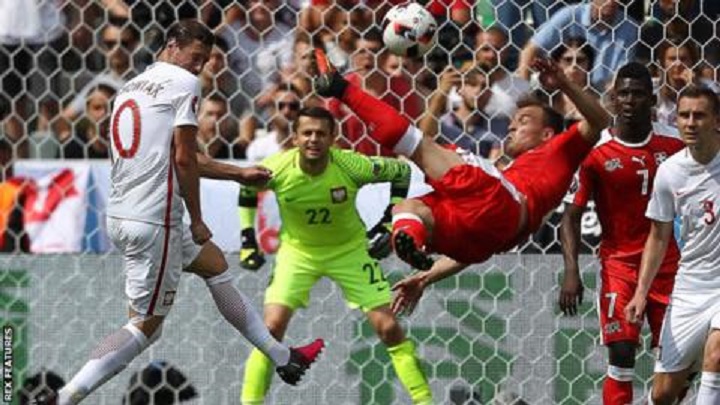 Blaszczykowski proved again he produces when his team need him most as he gave his side a first-half lead in the last-16 clash.

It is the first time Poland have reached the quarter-finals of a major tournament since the 1982 World Cup.

Adding to their joy, this is the first time they have reached the knockout stages at a Euro finals.

And the result meant Poland preserved their record of never having lost in all 18 games when Blaszczykowski has scored.

“Let’s hope it continues until the final,” said Blaszczykowski, who spent last season on loan at Fiorentina.

“It was the most difficult match so far. The Swiss made life hard for us.

“We dragged it out of their hands.

“I’m delighted, it was a historic moment for us, because we are in the top eight in Europe.”

Poland will now face either Croatia or Portugal — who were playing later Saturday –in Marseille on Thursday.

Their coach Adam Nawalka was delighted with the result, but said his side must improve their finishing after squandering a string of chances.

He praised them for keeping their composure even after Xherdan Shaqiri levelled for the Swiss with a spectacular bicycle kick in the 82nd minute.

“The most important thing is that when they scored a goal, you could see our potential and we re-took control of the match,” said the Poland coach.

“The first half was great, we created many chances but we could have scored more.

“We need to be prepared (for the quarter-final), teams who play at a high level will be attacking us and won’t sit back.

“My players played from the first until the full-time whistle.

“We showed our hard work in preparation has paid off.

“We still had plenty in reserve and we’re enjoying that now.”

Nawalka said the Poles had practised penalties and settled on who their five takers would be.

“We knew it could happen and we knew who the five players would be,” said the Poland boss.

“After the match and extra-time, we refreshed the list and the players confirmed they were ready,” Nawalka said.

“They deserve this win.” – Agence France-Presse