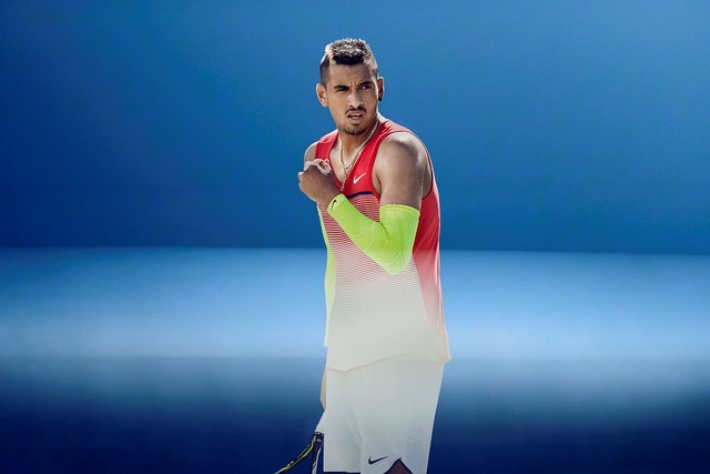 Nick Kyrgios admits he faces a “crazy” Wimbledon first round meeting with his mentor and fellow bad boy Radek Stepanek.

Kyrgios has earned a reputation as one of the most volatile players on the men’s tour after a series of distasteful antics, including appearing to stop trying during his Wimbledon defeat against Richard Gasquet last year.

The 21-year-old denied throwing the game, but was also in hot water during the same last 16 match for swearing and hurling his racquet in the air.

Kyrgios has struggled to stay out of trouble in the 12 months since his combustible experience at Wimbledon, so it is fitting that the world number 18 plays Czech veteran Stepanek when the grass-court Grand Slam gets underway next week.

Stepanek, 37, also has a reputation as a difficult personality on court and he apparently recognised a kindred spirit in Kyrgios, offering to help him with his problems this year.

“To play Stepanek obviously is pretty tough. I’m really good mates with him as well,” Kyrgios told reporters at Wimbledon on Saturday.

“To be honest, he was offering to help me a little bit.

“Not so much coaching, he was just helping me a little bit. So I’m playing him now, it’s pretty crazy.

“He’s getting towards the end of his career, but he’s still playing some great tennis. I know it’s going to be very tough.”

Kyrgios was fined $2,000 for his foul-mouthed rant during the Gasquet clash and drew widespread condemnation in Australia.

Asked if he had been told to tone down his antics by Wimbledon chiefs ahead of this year’s tournament, Kyrgios said he hadn’t been warned.

“No. I just compete. I thought last year I played all right. I made the fourth round. Lost to Gasquet 7-6 in the fourth set after four hours. Not too bad,” he said.

Kyrgios did show signs of his short fuse when quizzed on who was the favourite to win Wimbledon, where world number one Novak Djokovic has triumphed for the last two years.

“Probably Djokovic. It’s a silly question. No more questions for you, bro,” he snapped.

Kyrgios was no more engaged on the topic of England’s rugby union series sweep of Australia.

“I’ve been playing computer games,” he said when asked for his thoughts on the rugby.

But he was a little more forthcoming about his own chances at Wimbledon, where he hopes to emulate a run to the last eight in 2014 that included a memorable upset of Rafael Nadal.

“I mean, I made quarter-finals two years ago. I feel as if that run, I didn’t really expect anything at all. But I feel confident in my game. I feel like I’m getting better,” he said.

“I feel comfortable on grass, I always have. I think in Australia, we are fortunate enough to have tournaments on grass for younger kids.” – Agence France-Presse