Home News Others Lace Up Your Shoes – HSN21KM Comes to You! 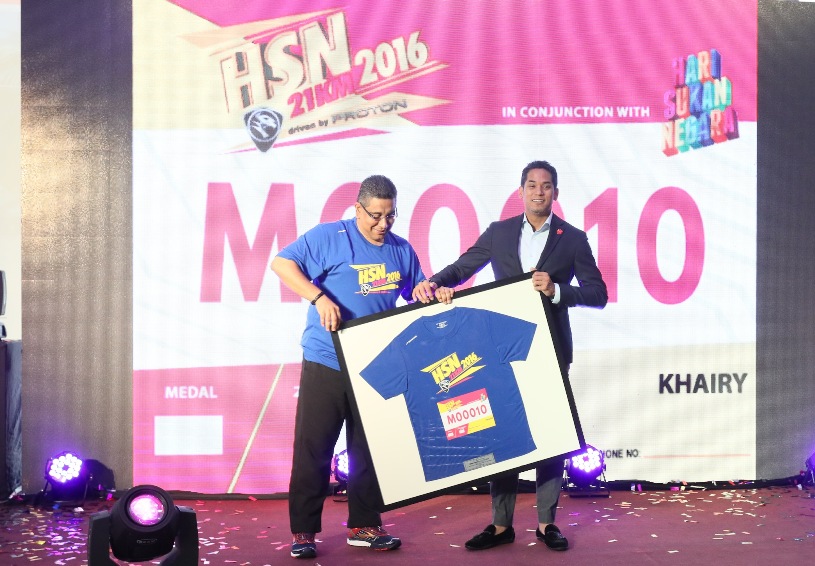 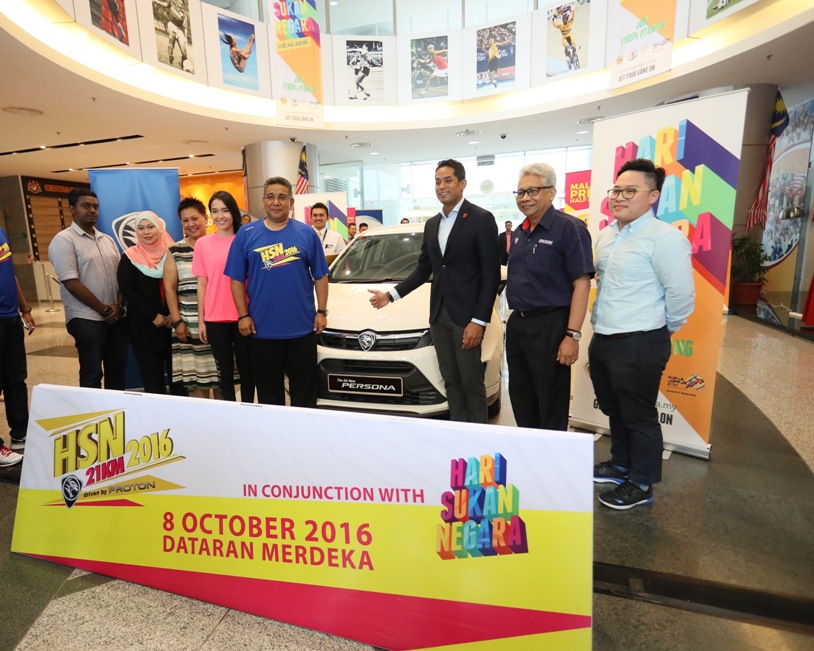 Runners can find themselves alongside fellow Malaysians and international running enthusiasts in the spirit of fitness and fun at theinaugural HSN21KM run set to take place on 8 October 2016.

The official launch of HSN21KM – the marquee event at this year’s Hari Sukan Negara celebration, was officiated today by the Minister of Youth and Sports, YB Khairy Jamaluddin together with the President of Muse Group Asia, Datuk Megat ZulkarnainOmardin. Muse Group Asia is the organiser and originator of the event.

“I commend this initiative by renowned event organiser Muse Group Asia and the Ministry is pleased to support HSN21KM. It is good to see the private sector coming forward to support the Hari Sukan Negara which is our national agenda in creating a sporting nation. Through HSN21KM and Hari Sukan Negara, we want to further ignite and strengthen the desire to keep fit and be healthy among all Malaysians. I am confident HSN21KM will receive good response from the public, based on the overwhelming support at last year’s Hari Sukan Negara activities. By encouraging the organisation of sporting events like HSN21KM, we also hope to discover new sporting talents,” said YB Khairy. This is the second year Hari Sukan Negara is being held, after the inaugural celebration in 2015.

Held in the heart of Kuala Lumpur, with three recognisable flag-off points, HSN21KM aims to bring together runners from all walks of life – inculcating the spirit of running in the young ones, challenging the elite and inspiring others to beat their personal bests or make their maiden attempt in a running event.

“This will be an event for anyone and everyone. From elite runners to casual strollers and just about everyone in between, HSN21KM will be a challenge, and more importantly, also a fun event that unites the people of Malaysia and international running aficionados. Since we opened for registration, we currently have 6,000 participants registered for HSN21KM, and we are geared up for the registrations to come flowing in after this launch,” said Datuk Megat Zulkarnain.

The event will feature three distances – 21km, 10km and 5km. The 5km fun runis designed as an obstacle race, and unlike the more gruelling, mud-slinging variety, there will be fun-filled obstacles for the whole family instead this time.

It is also unique in that participation is open to persons with disabilities, wheelchair-bound or otherwise.Flagging off at the famous Padang Merbok, the 5km fun run will make a thoroughly enjoyable race for families and fun-loving participants.

Dataran Merdeka will be the flag-off point for the 21km race. Set to be the highlight of HSN21KM due to the record-breaking opportunity, the 21km route will pass through several known landmarks such as Bukit Tunku, Petronas Twin Towers and more.

The 10km race, which is expected to have the largest participation, will flag off at Jalan Raja Laut, also passing through several landmarks on its route. All three races will end at Dataran Merdeka.

HSN21KM has much to offer participants. First off, the prize pursesbeing offered for the various categories are large, with up to RM36,000 to be won. The winnerof the 21km Open Men’s and Women’s categories can look forward to a RM 7,000 cash prize with various purses offered up to 6th place in the 21km Open and Veterans’ categories for both men and women. Cash prizes are also offered to the top five finishers in the 10km race – for the Open and Veterans, and Men and Women’s categories.

Beat Your Record is a special feature of HSN21KM, where Malaysian participants will have the opportunity to surpass the National Record for 21km and take home a whopping RM20,000 incentive.Arul ThevarMuniandy, who recorded a time of 1 hour 7 minutes 59 seconds in Ipoh on 4 July 2004, currently holds the men’s National record for the half marathon, while in the women’s category, record holder Norlida Ismail set the best time of 1 hour 27 minutes 15 seconds on 21 May 2005 at the Arafura Games, Australia.

“These records are set by fellow Malaysians, who have a place in history because of their outstanding feat. It has been more than 10 years since anyone has broken those records.HSN21KM challenges runners to make this attempt. If you break the record, you’ll be a newly discovered Malaysian sporting star! In the years to come, we are also looking to expand Malaysia’s reputation as an international destination for competitive runners, by organising bigger races in the future and more. The HSN21KM is an excellent beginning for the Ministry’s collaborations with the private sector to make this vision a reality,” added YB Khairy. 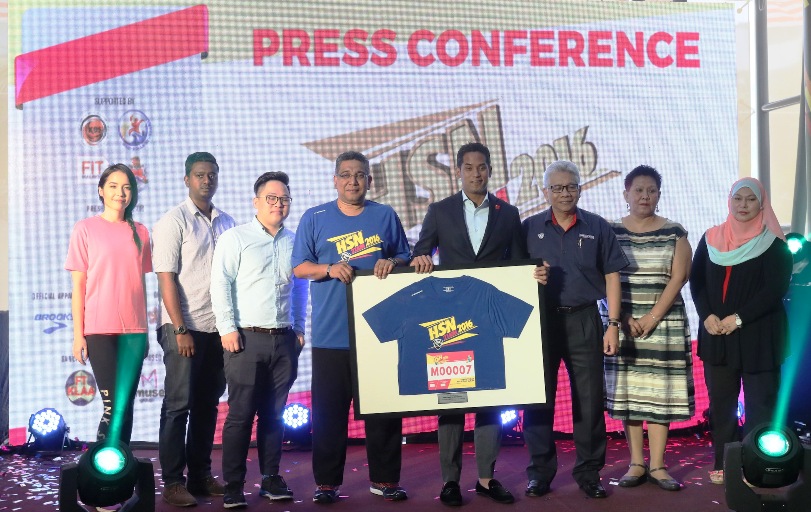 For runners who are capable of bringing their family and friends together, the Race Captain is just what they need. Individuals who can get 10 other people to sign up for HSN21KM in any category can run for free and will be called Race Captains.

Several companies have come on board as official partners and sponsors for HSN21KM. PROTON is the Presenter Sponsor, and is offering a car up for grabs as the lucky draw prize, which will be held at DataranMerdeka in conjunction with the race as well as HariSukan Negara. Both HSN21KM runners and visitors to the HariSukan Negara celebration at DataranMerdeka are eligible for this coupon-based lucky draw.

With Brooks Malaysia signing up as the Official Apparel Sponsor for HSN21KM, all participants can expect running T-shirts courtesy of Brooks. HSN21KM has also signed up Lucozade as the Official Beverage for the run and Swiss-Inn as the Official Hotel.

The race pack will be available for collection on 1 and 2 October 2016 from 10am to 6pm at DewanDato’ MokhtarDahari in the Olympic Sports Hotel in Kuala Lumpur.

There will be much to occupy members of the public at DataranMerdeka in conjunction with Hari Sukan Negara. Activities to expect include popular sports and games like netball, futsal, arm-wrestling, tug-of-war andan eSports competition, among others. There wlll be a OneSilat National Series competition for a touch of the traditional, while visitors young and old can also occupy themselves with kids’ activities, a sports bazaar and much more.

Registration for HSN21KM ends on 15 September 2016. Registration will close after this date, or if the maximum capacity is reached before the closing date, whichever comes first.