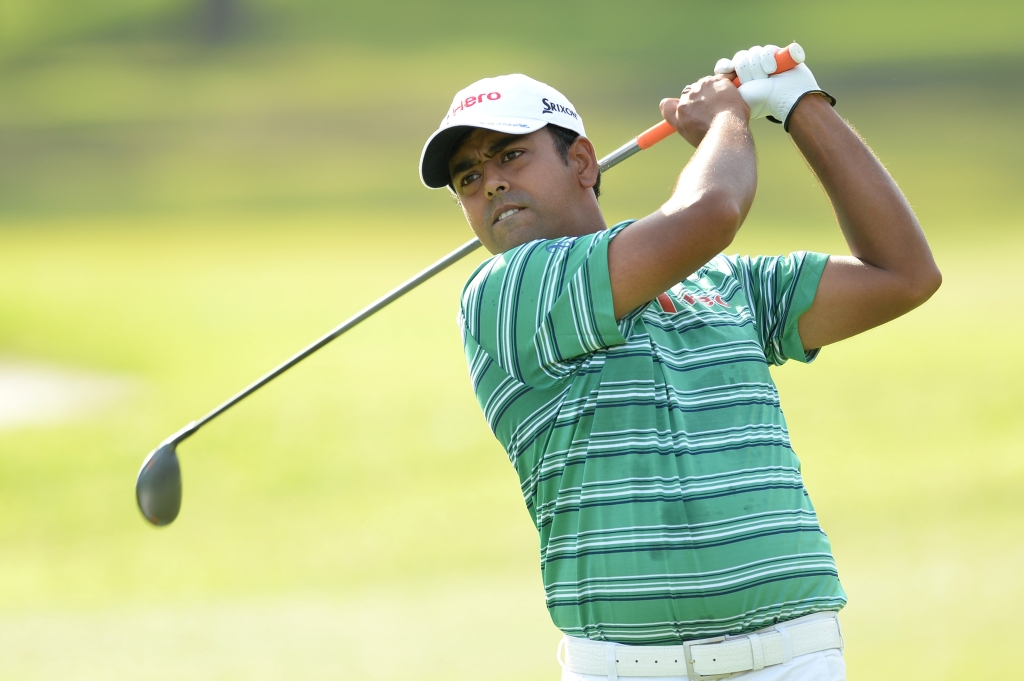 Reigning Asian Tour number one Lahiri, champion here in 2014 and runner-up in 2013 and last year, overcame an early triple bogey to shoot a three-under-par 68 at the Macau Golf and Country Club to share the halfway lead on eight-under-par 134.

Unheralded Sutijet overcame the emotions following the death of the King of Thailand, King Bhumibol, as he carded a 66 to put himself in position for a maiden Asian Tour victory.   Richardson (67), Vincent (64) and Chikkarangappa (65) also fought into contention.

Co-overnight leader Ian Poulter scrambled to a 73 to fall three shots off the pace in his first tournament back from injury while title holder Scott Hend fired a 67 to lie a further stroke back. World number 14 Branden Grace signed for a 71 and is six behind the leaders while Europe’s Ryder Cup captain Darren Clarke missed the halfway cut following a 73.

With an impressive track record at the Venetian Macao Open, the 29-yeara-old Lahiri, who is now 55-under-par in his last 14 rounds here, put himself in prime position to land a second victory in three years and eighth Asian Tour title.

“Obviously not the start I was looking for (with the triple bogey) but I was confident if I could claw myself back, I could put a score together,” said Lahiri, whose card included five birdies and one eagle. “End of the day, I’m still a bit disappointed I didn’t birdie one of the last three holes. However, I’m happy to keep myself in it.”

Lahiri, who played mainly in the United States this season, was happy close friend Chikkarangappa also fought his way into contention but he won’t afford any favours to the younger man.

“We’re always going to be friends, but on the course, we want to beat each other. He knows it, I know it. For 10 years now, whether it’s a dollar bet or a lunch bet, a bet is a bet. We’re both competitive. It’s a matter of time (he wins) as he has the quality and he’s shown it,” said Lahiri.

Sutijet, 29, hopes to honour the late King Bhumibol with a title run. Players wore black ribbons today while flags at the venue were at half-mast as a mark of respect following the passing of the Thai king on Thursday night. Play was also stopped for one minute at 12 noonas players, officials and fans observed a minute’s silence.

“I’m happy with my score but I feel so bad the whole day as we just lost our king. He’s the best of the kings, I just felt so bad when I played. I just tried to focus on my shots and tried to put on a score. I was thinking of him all day. Most of the Thai players couldn’t sleep last night,” said Sutijet.

Newcomer Chikkarangappa, who has registered two top-10s in as many weeks, credited his hot putting for his run, eagling the last hole from eight feet. “The key was putting although I did hit some good wedge shots in,” said the 23-year-old, who needed only 24 strokes on the putting surface.

“I miss playing with him (Lahiri) these days and I hope we can play together tomorrow. I’m very excited. He’s won events out here, he’s got a lot of experience.”

Qualifying School graduate Vincent, runner-up at the Shinhan Donghae Open in Korea last month, produced the day’s best round with seven birdies against no bogeys. “I hit some good shots early and knew we had to get out of the gates early. I managed to take advantage of some fairly easy holes and got the round going and kept it from there,” said the slightly built Zimbabwean.

A first top-10 of the season in Indonesia last week has given Richardson a confidence boost as he chases a first Asian Tour title. “I’m just pretty confident with my game at the moment … pretty switched on with my focus. If I make a bogey, I’m pretty quick to get it back and hit a good shot. Starting this year, I would have let it slipped a little and probably make a few more bogeys but I’m pretty happy with the way I held it together,” he said.