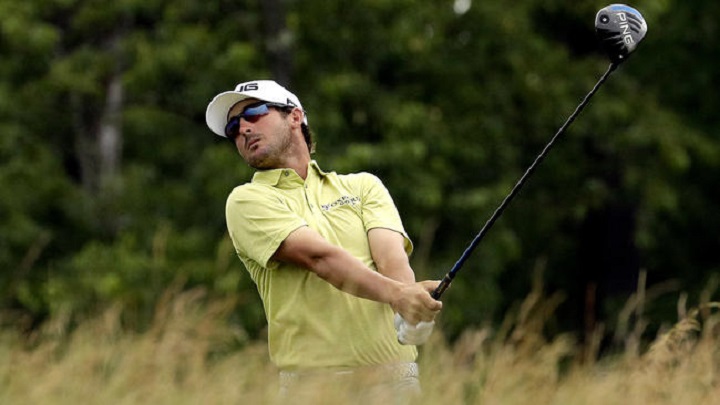 Unheralded Andrew Landry rolled in a 10-foot birdie putt to cap a first-round 66 on Friday for a one-shot clubhouse lead over England’s Lee Westwood as the rain-delayed US Open went into overdrive.

The 28-year-old Texan, ranked 624th in the world, had six birdies in his four-under effort, the lowest first-round score in the nine US Open championships held at Oakmont.

“That’s pretty cool,” said Landry, who insisted he didn’t lose any sleep over the putt he’d been left at the par-four ninth when play was halted for the third time on Thursday because of thunderstorms.

“It was a pretty easy putt to make,” said Landry, who was briefly three strokes clear of the field.

Former world number one Westwood closed the gap with a birdie-birdie finish to his first round.

The Englishman, still seeking a first major title, had three birdies in the final six holes of a round that he jump-started with an eagle two at the par-four 14th on Thursday — his fifth hole on the rain-plagued opening day.

“I hit it close, gave myself lots of chances,” said Westwood, who needed just 26 putts on Oakmont’s treacherous greens.

“When it’s wet like this it’s more scoreable,” Westwood said, but he added that Oakmont still posed a formidable challenge.

“You have to do everything well round Oakmont, it tests every aspect of your game to the limit,” he said. “It’s one of the great US Open golf courses.”

Some half the field, including world number one Jason Day and five-time major winner Phil Mickelson, didn’t make it to the first tee until Friday morning.

They faced a marathon day, scheduled for a quick turnaround between their first and second rounds, while the US Golf Association announced that the other half of the field would start the second round on Saturday morning.

The third round is slated to begin shortly after the halfway cut is made on Saturday.

Westwood was unfazed by the stop-and-start action on Thursday, when a series of thunderstorms led to three delays before play was finally suspended for the day.

“You’ve just got to grin and bear it and have another coffee,” Westwood said.

Ireland’s Shane Lowry was in the clubhouse on two-under 68, while amateur Scottie Scheffler — one of just nine players to complete the first round on Thursday — was joined on 69 by New Zealand’s Danny Lee, two-time Masters champion Bubba Watson, and American Kevin Streelman.

“It’s interesting as wet as it got, it didn’t necessarily get easier,” Streelman said of the course, where whatever benefits the rain brought on the greens was balanced by the increased danger of the dense, wet rough.

“I’d say it just got different than what we’ve been preparing for.”

The 2011 US Open champion bogeyed the last three holes for a seven-over 77 that left him 11 shots off the pace and facing a battle to make the cut.

He said the stop-start play “definitely complicated” the first round.

“But when you shoot 77 everything is a bit complicated,” McIlroy added. “There are scores out there to be had. You really need to be in control of your golf swing though and today, or over the last two days, I haven’t been.”

World number two Jordan Spieth, aiming to become the first to successfully defend the US Open title since Curtis Strange in 1989, carded a 72, while Masters champion Danny Willett signed for a 75. –  Agence France-Presse