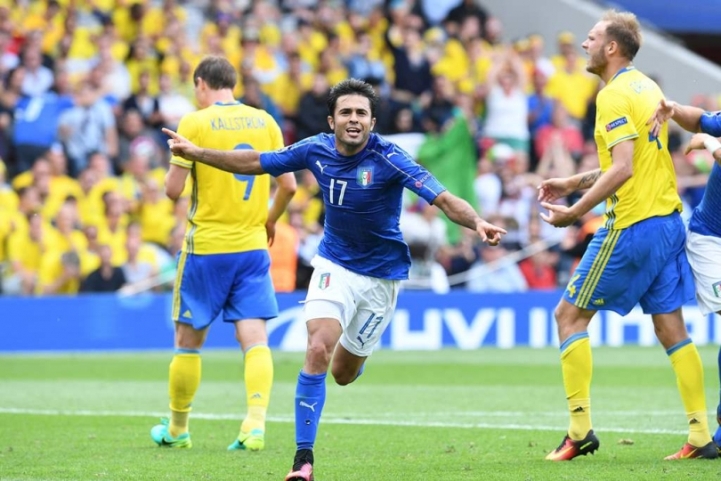 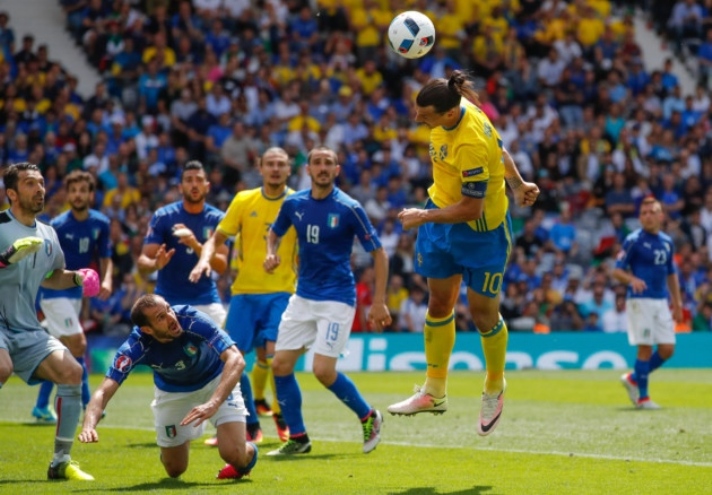 Brazil-born striker Eder overcame an otherwise patchy performance to hit a cracking late winner in a 1-0 victory over Sweden that sent Italy into the last 16 of Euro 2016 on Friday.

Eder, playing in his first major finals for Italy after being naturalised last year, came close to being substituted by Antonio Conte after a dismal opening half up front alongside Southampton striker Graziano Pelle.

But the Inter Milan striker had the Italy bench celebrating wildly on the pitch at the Stadium de Toulouse with a well-taken 88th minute strike after running on to Simone Zaza’s header to beat Andreas Eriksson at his far post.

Italy, 2-0 winners over Belgium last week, now top Group E with six points, leaving Sweden, who had late claims for a penalty waved away, realistically needing to beat Belgium on Wednesday if they are to have any hope of making it to the knockout phase.

After a mediocre display in Sweden’s 1-1 draw with the Republic of Ireland, all eyes were on captain Zlatan Ibrahimovic as the towering striker sought to make his mark by becoming the first man to score in four editions of the competition.

But a cautious Italy restricted the former Juventus and Paris Saint Germain striker to few real chances in front of a huge army of yellow-clad Sweden fans.

They were given hope after just two minutes when Ibrahimovic rose to meet a high cross, but Giorgio Chiellini cleared with his head.

It was one of few real chances for Erik Hamren’s men in a tight first half that saw Italy strikers Pelle and Eder fail to shine on their few real forays up the park.

Italy’s formidable three-man defence meant Gianluigi Buffon had little to do until he dived to collect Kim Kallstrom’s curling shot, and the Juventus ‘keeper was happy to see Olsson’s drive whistle past the post soon after.

When Daniele De Rossi fouled Ibrahimovic in midfield, the striker got his head to Kallstrom’s 40-yard free kick but he was flagged offside.

The Azzurri broke the monotony when Candreva collected Florenzi’s cross-field ball to fire in an inviting cross, but Erik Johansson was quick to intercept.

At the other end Sweden edged closer, Sebastian Larsson chesting a long cross into the path of Celta Vigo’s John Guidetti only for the striker to skew wide.

Italy started the second half in positive fashion, Pelle controlling Eder’s cutback from a Marco Parolo through ball, but his volley dipped over the crossbar.

Parolo did well to control De Rossi’s pass and set up Candreva on the right, but the Lazio man’s drive into the area was collected by Isaksson, who got down quickly to smother moments later after another Candreva delivery.

On that occasion, Eder was well out of position but it was Pelle who was replaced on the hour, by Simone Zaza.

Minutes later, Florenzi’s high delivery across goal found Candreva at the back post, yet Isaksson again got down low to smother the Lazio man’s low first-time effort.

Italian hopes looked to be dying out and the Azzurri breathed a sigh of relief when Ibrahimovic fired over from a yard out at the back post although he was ruled offside.

Parolo raised Italian hopes on 82 minutes with a header that came off the woodwork.

But it was Eder who rescued Conte’s men with a fine run that took him past the Swedish defence to fire the ball into the net with two minutes to play. – Agence France-Presse