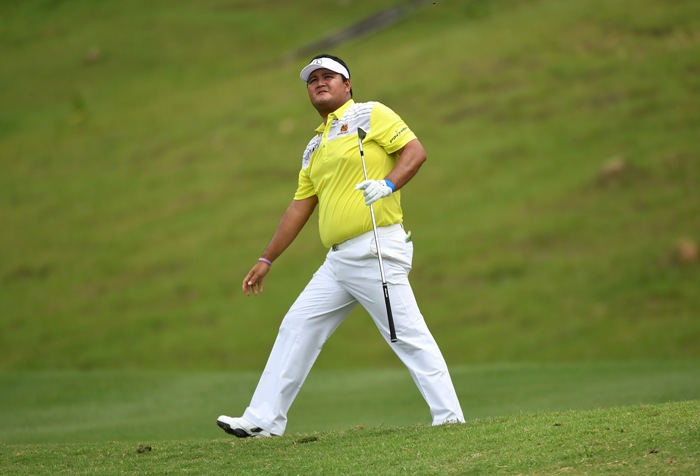 The man nicknamed the “Big Dolphin” joined American Paul Peterson and Spaniard Carlos Pigem atop the leaderboard at the weather-hit US$300,000 Asian Tour tournament after snaring six birdies, including four on the trot on his homeward home.

Peterson also enjoyed a flying 65, highlighted by a superb eagle from 30 feet on the par five 18th hole while Pigem propelled into contention for a maiden Asian Tour title with a solid 69.

Two weather disruptions, one in the morning and another in the afternoon, meant that 67 players, including overnight leader Thaworn Wiratchant and title holder Prayad Marksaeng, will return at 7am Saturday to complete their second rounds. Round three will commence no earlier than 9am.

The 31-year-old Prom, who is a two-time winner on the Asian Tour, was delighted to post his lowest card at Santiburi Samui, a venue which he has two top-10s previously.

“I didn’t know it was my best round here,” beamed Prom. “I played good, especially on the par threes where I was three under par today. It was playing easier as there was no wind and it was also preferred lie. So I just tried to put the ball on the fairway, that’s the key on this golf course.”

With his family in town at the famous holiday isle, Prom believes a relaxed approach could be the key to winning the Queen’s Cup for the first time, an event that has been dominated by Thai players since it joined the Asian Tour Schedule in 2009.

“It’s quite relaxing and I feel comfortable here. Four birdies in a row also helps. It’s always special to win in your home country. I’ll be trying my best to do this. Next two days, I won’t change anything. On this course, the fewer mistakes you make, you’ll win,” said Prom, who has a two-day total of seven-under-par 135.

Peterson, who finished an impressive fifth on the Asian Tour’s Order of Merit last season, produced his season’s low round to charge into contention for a first Asian Tour victory. The lefthander has struggled to hit top form this year, with only one top-20 to his name, but a telephone conversation with his coach last night did wonders for the amiable American.

“It was a fun round, fun to play some good golf again. That’s good. I just got into a good rhythm,” said Peterson, who finished sixth in the Queen’s Cup last season.

“I had a nice chat with my coach about some putting stuff. Yesterday, I felt like I was banging my head against the wall as nothing went in. We had a nice chat about some things and the hole opened up. Hopefully we’ll have more of that this weekend. It made a huge difference,” added the American, who needed only 25 putts in his second round compared to 31 in the opening round.

Pigem, 25, was delighted to move into the hunt, especially when Santiburi Samui has not been kind to him in the past where his best finish was tied 38th and two missed cuts.

“The last two rounds here, I shot like 79 and 74 and I didn’t have good memories. But I always come here as I like the place and I like the country. This year, the first two rounds, I’ve played good, so I’m happy,” he said.

Thai youngster Jazz Janewattananond returned a fine 67 to lie one back of the leading trio while big-hitting Aussie Scott Hend moved into contention with a 69 to lie three shots off the pace.

Scores after round 2 of the Queen’s Cup Samui Golf Tournament 2016 being played at the par 71, 6,808 Yards Santiburi GCC course (am – denotes amateur):

Note: 67 players will resume round 2 on Saturday, 7am.