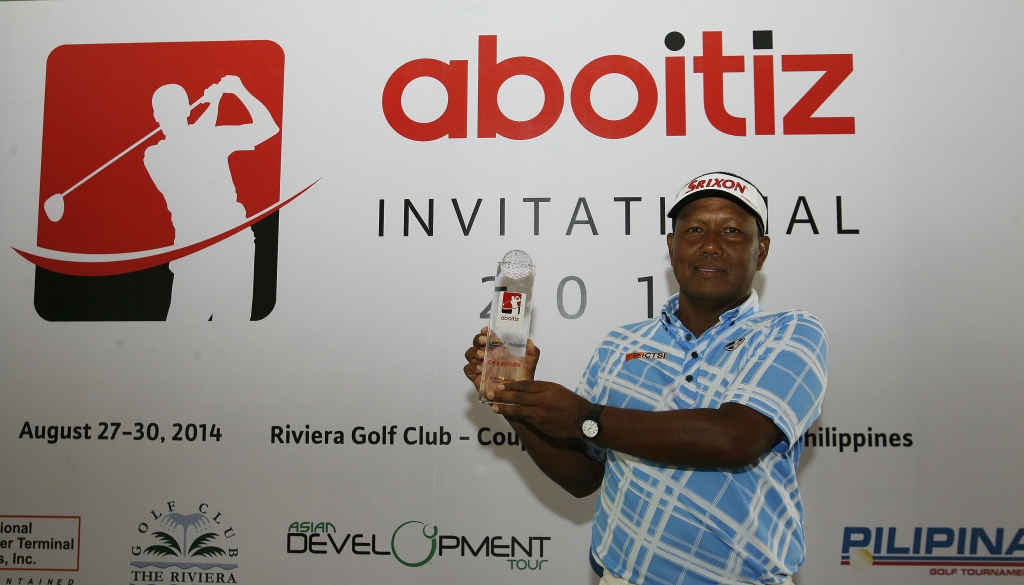 Local veteran Antonio Lascuna claimed his first Asian Development Tour (ADT) title after closing with a six-under-par 66 for a three-stroke victory at the US$100,000 Aboitiz Invitational on Saturday.

The 43-year-old overnight leader traded one eagle and six birdies against two bogeys for a winning total of 20-under-par 268 at the Riviera Golf and Country Club’s Couples Course.

Another local star Angelo Que, who returned with a 67, was left to rue another missed chance on winning the title as he settled for a second consecutive runner-up finish at the Aboitiz Invitational, which is the 14th leg of the ADT schedule this season.

Lascuna, who took home US$17,500 and earned six Official World Golf Ranking (OWGR) points, became the third Filipino following Elmer Salvador and Rufino Bayron to win on the burgeoning Tour this season. Prior to his ADT success, Lascuna had secured three victories on the domestic circuit this year.

“I’m very happy to win the tournament. I’ve won a few times on the local Tour but this is especially sweet because it’s my first win on the ADT and winning it on home soil made it even more special,” smiled Lascuna.

Lascuna is currently ranked eighth on the Asian Tour Order of Merit courtesy of a tied-second finish in May at the Philippine Open, which is the oldest National Open in Asia. He also leads the current merit rankings on the domestic circuit.

“I’m happy with how I have been playing so far this season and it is good to be able to still compete against the younger players out there. My game is looking good and I am looking forward to playing on the Asian Tour again,” added Lascuna.

Despite missing out on the title for a second time, Que was delighted to turn his lackluster season around with what was his best finish so far this season.

“I played really solid. My result would be a good score to obtain in every other tournament but unfortunately, it was not good enough to beat Lascuna this week. I’m still very happy for him. We always enjoy playing with each other and we respect each other a lot too. Both of us played solid so it doesn’t really matter who wins,” said the father of two.

Que fought bravely on the front nine where he was flawless with four birdies. He got closer to Lascuna when he eagled the 16th but was unable to keep up his chase as he dropped a shot at the following hole.

“I didn’t really think I had a chance to win after my eagle on the 16th because I kind of knew he will birdie that hole which he did. Looking at how he has played the whole day, I knew he was going to win. Nevertheless, it is still a great week for me,” added the 35-year-old Que.

Que will be heading to Switzerland next week for the Omega European Masters, which will launch the second half of the Asian Tour’s 2014 season.