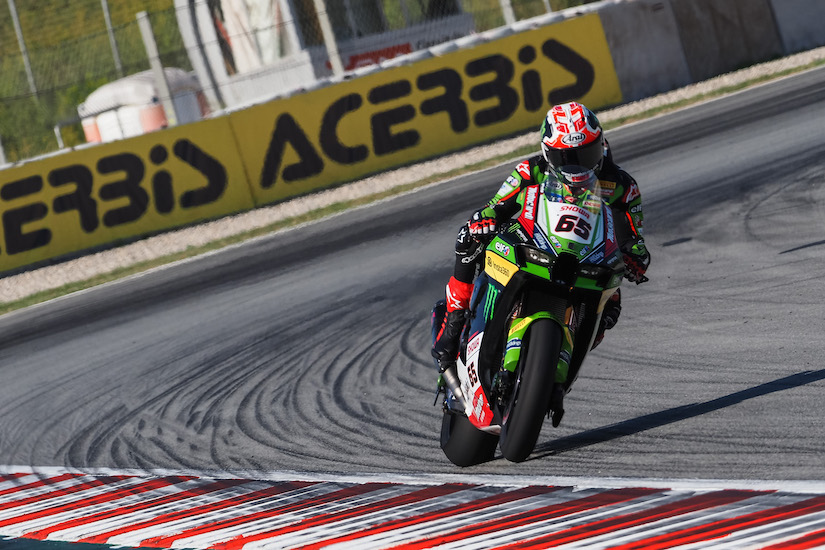 “P1 on this first day is not 100% real but it’s true that I have the speed. I worked alone all day. In the morning, in FP1, I put the SCQ tyre on because we need some data for the Superpole Race. I also used the SCX where my lap time is three tenths slower than Toprak and Rinaldi. I go close, I go alone, and I feel confident. In FP2, I worked for the race. I used just one set of tyres, the SC0, so the hard one just because Rinaldi won here last year by three seconds using it. We want to try. I feel good, I feel strong. We will see. Alvaro went very fast; I checked his pace and it was amazing. I’m very close to Jonny. We will see tomorrow, with the weather conditions, anything can happen. In Superpole, the realistic goal is to stay in the first two rows for the first time. I think I have the speed. In the race, I feel confident and strong, and my pace is similar to Jonny. I know Kawasaki struggle here a lot. Maybe we have the chance to fight for the podium.”

“It was a different Friday because the forecast for this weekend is strange, it looks like it will rain. So, we had to try every tyre that Pirelli bring us only in two sessions. This was our plan, not working too much on the set up or the electronic. In the end, we improved a little bit in those area. This morning, we tried the SCX and then B0800 rear tyre and this afternoon, I used only one set of tyrse to try to make race distance. I’m really happy about our pace and our speed but of course we can always improve a little bit. I think we are quite consistent.”

“It was a good Friday for me. In every session, we tried to find a good set up for the race. But tomorrow, I think it will rain, and we will need to try some new set ups. We’re happy. The Ducati are very fast, but we’ll keep fighting in the race. For me, it’s a positive Friday. In FP2, we tried this new set up and I tried the shorter race simulation and I understood what was working or not. It was good to find the set up for this race. The afternoon was very positive. It looks like we are ready to race, our pace is not bad. I think we’ll be fighting for the win again.”

“Things have been very positive because we could do both practice in dry conditions. At the end of FP2, there were some drop of rain, but it didn’t change our plans. I’m happy with the feeling of the bike. In the morning, we tried different front tyres and also the rear from Magny-Cours. With the rear, I didn’t have the same feeling as in Magny-Cours. With the front, I didn’t really have good feedback in the morning but in the afternoon, we came back to our front base tyre and I felt much better. We also tried the SCX tyre and I tried to manage the tyre to do many laps in a row. The feeling was not bad. We worked a lot with the electronics, to use less power and a bit more TC control, to save the life of the tyre more than looking at the performance. We were consistent for 15 laps without destroying the tyre. So I’m happy because I’ve felt good also on the front.”

“Friday was not so bad. I was working a lot to try and understand the tyre. We know Barcelona is a difficult track. There is always some tyre drop. The first lap is always very fast and the last lap have some drops. So it was trying to understand the bike in different situations. In the afternoon, I was able to do a longer run to understand where that was coming, how we could adapt the bike for FP3 tomorrow. You never know if the rain is coming here. Let’s say in the wet it’s more of a lottery because you can have wet, wet-wet, you can have drying wet, wet with drying line, … you never know how to deal the perfect set up. In the dry it’s clearer, you understand from Friday where you’re going to be, things to work on. But we’ll try to make the best possible.”

“I’m really happy about the first day. The feeling with the bike was immediately really good, especially in FP1. Today, the feeling was a bit different in FP2 and also it wasn’t easy to do a lap time. But again, the feeling was not so bad and I think we have a good base set up here in Barcelona, especially after the test here in August. We worked very well, we were really fast here. Today I’m really happy and I have a lot of confidence with the bike so I want to continue on this line. Tomorrow we have the first race and it will be important to be in front. I think in the last rounds, we understood a bit more about the bike and also how we can do to use the new tyre, it was a difficult moment but today we have a good reference and we understand much.”

Xavi Vierge (Team HRC) was also impressive as he was fifth in FP2, finishing in seventh place overall.