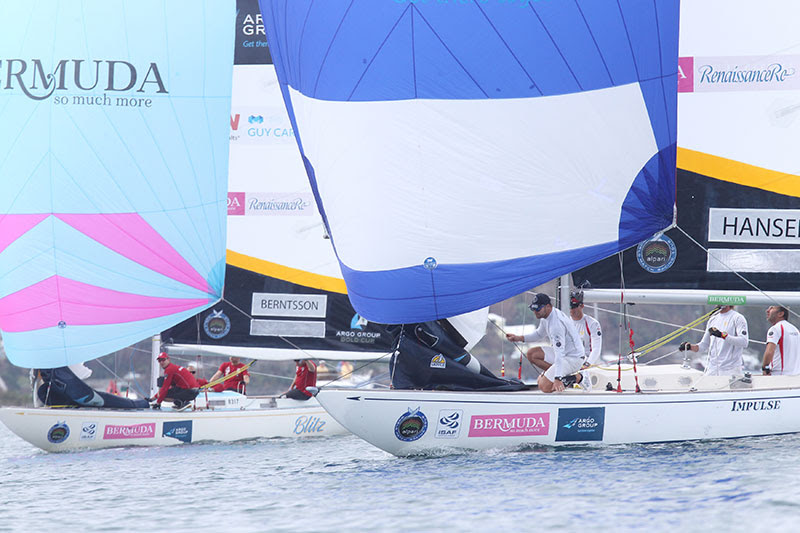 A frontal system edging its way towards Bermuda resulted in light winds, a grey sky and racing eventually being canned early, but not before the remaining Quarter Final flights had been completed at the Argo Group Gold Cup, the sixth stage of the Alpari World Match Racing Tour.

“We like these conditions – it is what we are used to!” said Monnin, who normally races in the typically light winds on Lake Geneva. “We were able to get speed in the boat and got the puffs and the shifts, sailing a bit like we were alone. It is great for us.”

Ian Williams and his GAC Pindar crew also went through the Quarter Finals with a 3-0 scoreline against Poland’s plucky Marek Stanczyk and his Henri Lloyd Rainmaker Racing team. For Williams the racing was much closer. In both his matches today Stanczyk was over early and had to restart immediately putting him on the back foot. However on both occasions he managed to fight back into contention.

As Williams observed: “It was tricky out there and it was hard to defend the lead. Often the boat behind at the top mark would be quite strong down the run, but we were able to dominate the starts and be able to start a little faster, which gave us options and we were generally just far enough ahead at the top mark, which made it easier to defend on the run. It worked out well for us.”

Impressively Williams’ GAC Pindar team has made it all the way through Qualifying and the Quarter Finals without suffering a loss. Obviously this comes through experience and sailing well, but Williams believes there may be more to it. “It is often the way in Bermuda that you can get on a winning streak or a losing streak and if it’s the latter, they are hard to turn around. Obviously things have gone our way.”

Taylor Canfield and his US One team had a hard fought series against Finland’s Staffan Lindberg and his Alandia Sailing Team. Lindberg initially levelled the scoreline to 1-1 in today’s first flight. In the opening two races Canfield managed to plant a penalty on his opponent. In the first Lindberg managed to get suitably far ahead to be able to carry out his penalty successfully at the finish line, but in the second he didn’t. Ultimately in the fourth flight it was the defending Alpari World Match Racing Tour champion who sealed the deal 3-1 to go through to the next round.

Today’s most closely fought matches came in the ‘Swede-off’ between tour card holder Björn Hansen and former holder Johnie Berntsson with his Stena Sailing Team. This was the only Quarter Final bout to go the full distance and proof that even in the lightest conditions match racing can still provide edge of the seat tension.

Prospects were not looking good for Hansen this morning starting Match 3 0-2 down against his opponent. However he successfully fought back to level the score 2-2 and was clearly on a roll. The first attempt at a decider came to nothing when the wind severely clocked right, turning the beat into a ‘one tacker’ and was stopped by the Race Committee. In the second all was going well for Hansen as he led around the race track until the very last run. During this he was rolled in a gybe, a text book match racing play by Berntsson who then carried the lead to the line.

“We did it pretty well even in the last race,” mused Hansen, “but the second time at the top mark the breeze just died and when the new breeze came from behind, Johnnie managed to catch up and that gybe was a very difficult decision for us to make. He was coming in with more speed, and there is always the risk to be rolled in that situation. I think over the series they did a better job than we did and that is why they are in the Semi’s not us.”

Johnie Berntsson was ecstatic about winning against his fellow countryman. “It all came down to the last downwind. When the wind is so light it is really tricky to lead, even for Björn. We covered him as much as we could and put the gybes in the positions where we wanted and after two gybes we passed him and could just stay in front. Our tactician Rob Scarp did a really good job especially during the downwinds – that made a big, big difference and meant we could pass Björn.”

The race committee postponed proceedings waiting for the wind to fill in until mid-afternoon when the racing for the day was cancelled. However by this time Ian Williams had already drawn his Semi Final opponent in Eric Monnin, leaving Taylor Canfield to face Johnie Berntsson.