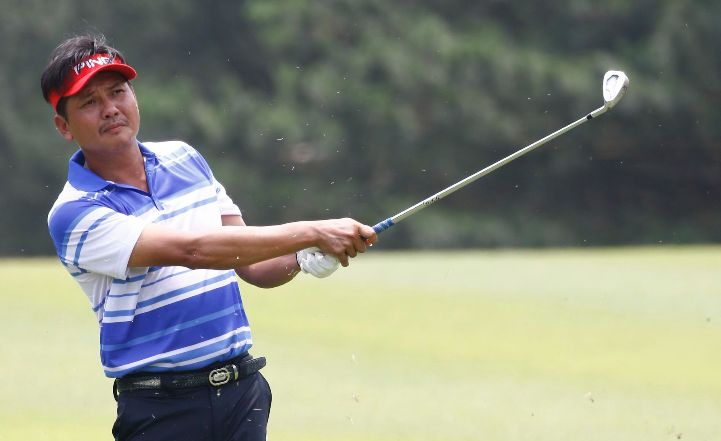 Lin Wen-ko battled to a five-under-par 67 despite struggling with a hip injury to lead by four shots at the halfway stage of the Ambassador ADT on Friday.

The 41-year-old Lin felt discomfort in his left hip midway through the round but played through the pain barrier to return on a 12-under-par 132 total at the Hsin Feng Golf and Country Club, which is his home course.

Itthipat Buranatanyarat of Thailand, ranked third on the Asian Development Tour (ADT) Order of Merit, produced a sparkling 66 to sit in second place while Hsu Hao-sheng of Chinese Taipei was a further shot back in third place at the US$120,000 ADT event.

Lin Wen-tang of Chinese Taipei, fighting for a place in the Olympic, fired a 69 to make the weekend but Gavin Green of Malaysia who occupies the final and 60th position on the qualifying list to play in Rio in August missed the cut by one-shot.

The halfway cut was set at one-over-par 145 with a total of 58 players qualifying for the final two rounds.

Lin, the younger brother to Wen-tang and a former Taiwan Masters champion, took medication after 11 holes to ease the pain. An accident 10 years ago forced him to undergo a hip replacement surgery and he continues to feel slight pain occasionally.

He was one-under through 12 holes but returned with four birdies in his closing six holes after taking medication to preserve his overnight lead.

“I put a lot of pressure on my left hip because I’m trying to hit low shots in these windy conditions. It hurt during the round but I felt so much better after taking medication and enjoyed a nice finish,” said Lin.

“You have to be patient here and I was. It is nice to be leading in a tournament especially on your home course. Obviously I have a nice lead now but it will be better if I extend that lead during the weekend,” he smiled.

The 23-year-old Itthipat, a two-time ADT winner, recovered from an opening bogey with a 15-foot eagle putt on the 14th hole. He returned with five birdies after the turn which included two closing birdies to trail by four shots.

“When I bogeyed the first hole, I didn’t think about it. I kept chasing for birdies. The eagle gave me the confidence for the remainder of the round. I don’t want to think about other players. When I play golf, I play for fun. I maintain a happy attitude and that works for me,” said the bubbly Thai.