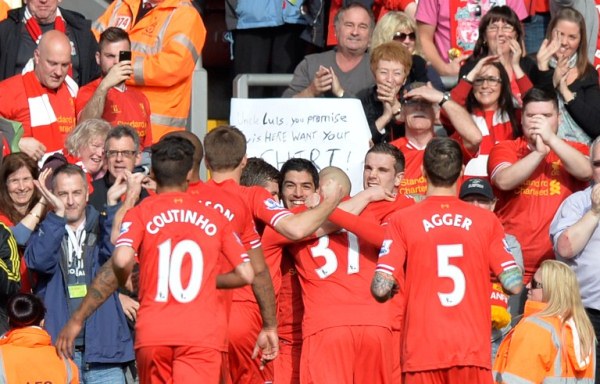 LIVERPOOL overwhelmed Tottenham Hotspur 4-0 at a fervent Anfield to take over at the top of the Premier League table with six games of the season remaining.

The win took Liverpool two points above previous leaders Chelsea, beaten 1-0 by Crystal Palace on Saturday, and left the 18-time champions on course for a first English league title since 1990.

Third-place Manchester City, four points below Liverpool, have two games in hand, but both they and Chelsea must visit Anfield before the season ends.

“We have won eight games in a row and we will enjoy that,” Liverpool manager Rodgers told Sky Sports.

“It’s just about going back to work next week and we have a tough game against West Ham next.

“The dream is for our supporters. They want to win the title. It has been a long time, but it’s not in my thinking. We just need to prepare and do well and if we do that, we will win games.”

Tottenham had been thrashed 5-0 by Liverpool in December’s reverse fixture, precipitating the departure of coach Andre Villas-Boas, and this defeat left Tim Sherwood’s side eight points below the top four in sixth place.

Liverpool have made a habit of scoring early in recent weeks and it took them under two minutes to take the lead against Spurs, with Kaboul inadvertently knocking Glen Johnson’s low cross into his own net.

Spurs’ cause was not helped by an injury to centreback Jan Vertonghen and his replacement, Michael Dawson, was to play an unfortunate role in Liverpool’s second goal in the 25th minute.

His volleyed pass towards Kaboul allowed Suarez to pounce and the Uruguayan ran away from the Spurs centrebacks before driving a left-foot shot across visiting goalkeeper Hugo Lloris.

The goal was Suarez’s 29th in the league this season, eclipsing the Premier League club record of 28 set by Robbie Fowler in 1996.

Roberto Soldado threatened to give Spurs a foothold in the game with a curling shot that drew a flying save from Simon Mignolet, but Liverpool ended the first half on top, with Lloris brilliantly touching a header from Suarez onto the post.

Coutinho killed the game off 10 minutes into the second period, drilling a low shot into the bottom-left corner from 22 yards.

Henderson added a fourth in the 75th minute with a free-kick from wide on the left that eluded everyone on its way into the net, leaving the home fans to serenade their side with chants of “We’re gonna win the league!”

Earlier, substitutes Kevin Mirallas and Steven Naismith scored as Everton won 3-1 at bottom club Fulham to close to within four points of the Champions League places.

Everton took a 50th-minute lead at Craven Cottage when Fulham goalkeeper David Stockdale unwittingly diverted a deflected volley from Naismith into the net for an own goal.

Ashkan Dejagah came off the bench to score a stunning equaliser for Fulham in the 71st minute, cutting inside from the left flank and letting fly with a rising shot that flew into the top-left corner.

Victory took Roberto Martinez’s side to within touching distance of fourth-place Arsenal, on whom they have a game in hand, ahead of next weekend’s meeting between the sides at Goodison Park.