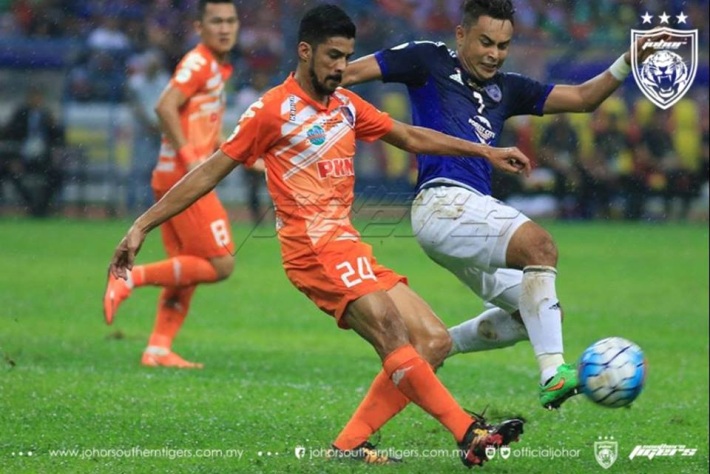 # Spotlight on the Argentines of both teams

The Malaysia Cup opening Group A match has drawn the focus of the football fraternity in Malaysia – more so when Johor Darul Takzim are playing Premier League club side PKNS FC of Selangor.

With the match being played at the now famous Larkin Stadium in Johor Bahru – the home of the Southern Tigers – the much awaited clash between the two teams is a repeat of the FA Cup final at in May when the JDT edged home E. Elavarasan’s team 2-1 to lift the silverware – their thi this season after retaining the Charity Shield as they target to make a clean sweep of all the football titles in the M-League.

All eyes will also be on PKNS hot-shot Gabriel Guerra who hogged the limelight for wrong reasons during the recent break and second transfer window when he was seen wearing JDT jersey and the pictures were uploaded on the social media. This drew hue and cry from the PKNS management as the player is still tied down with a contract with the Premier League club.

The “Argentine get together” among the Argentine players plying their football trade in the M-League came with comments from various parties and it did not go down well when Guerra failed to show up for PKNS training after the break.

PKNS foreigners are hot on the scoring trail – plundering goals in all competitions with Guerra leading the charge with 19 goals which made him Elavarasan’s prized possession. The other Argentines in PKNS are Gonzalo Sato and Juan Cobelli while Chilean-born Palestine international Matias Jadue complete the foreign leigion.

JDT too have their own Argentine “heroes” with Jorge Pereyra Dia being the “darling” of the home fans who never fail to show up when JDT are playing – not matter where.

Juan Martin Lucero has found his touch after a rather slow start to his M-League campaign but with Argentine coach Mario Gomez calling the shots the Latin American connection has delivered. Brazilian Marcos Antonio has been a pillar of strength in the JDT backline.

“We are much wiser now after the heartbreak of losing in the FA Cup final. The results of our friendly matches during the recent break are not a bother too. The friendlies are matches where you test out your strategies,” said Elavarasan after checking into the Puteri Pacific hotel in Johor Bahru on Monday.

“Tomorrow’s match has drawn a lot of excitement on both sides. However, with JDT with their stars in the side will be the favourites. We will be better suited as the underdogs and I expect a committed and disciplined performance from my team.”

Elavarasan’s final shot: “Play to instructions and be fully focused.”