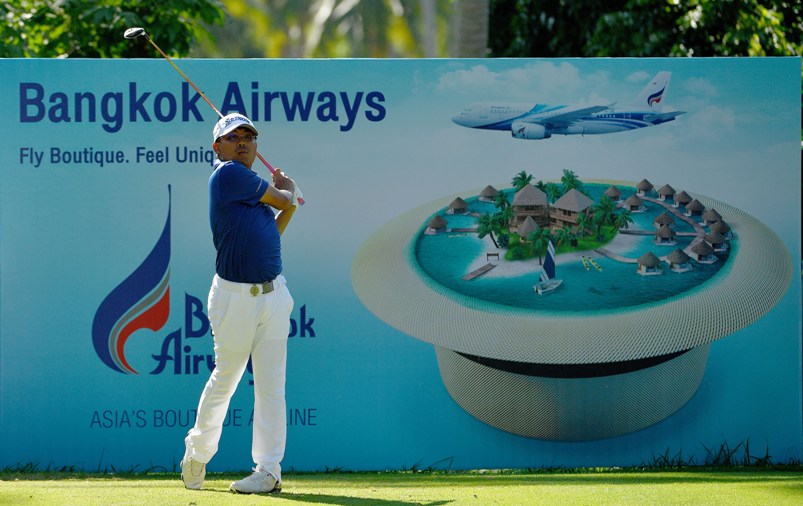 Malaysia’s Nicholas Fung birdied two of his last three holes to take a one-shot lead over former Asian Tour number ones Thaworn Wiratchant of Thailand and Filipino Juvic Pagunsan after the third round of the US$500,000 Queen’s Cup on Saturday.

Fung, 27, patiently carved out a three-under-par 68 at a tricky Santiburi Samui Country Club to give himself a shot at earning a maiden Asian Tour victory with his three-day aggregate of 11-under-par 202.

Overnight leader Thaworn battled a 70 to slip into tied second place on 203 alongside sweet-swinging Pagungsan, who birdied three of his last four holes for a 68.

Thai rising star Jazz Janewattananond posted the day’s best of 65 to move into a share of fourth place on 204 alongside Malaysia’s Danny Chia (67), Hung Chien-yao of Chinese Taipei (67) and Angelo Que of the Philippines (69).

Fighting off the effects of a lingering flu, Fung earned his first ever third round lead on the Asian Tour while playing in the company of two-time Order of Merit winner Thaworn, who also holds the most Tour victories with 18 titles, and Pagunsan, the 2011 Asian number one.

The slightly built-Malaysian, who has three-runner-up finishes in his career, turned in one under with three birdies against two bogeys before rallying strongly at the end of the round to edge ahead of his more illustrious playing partners.

Thaworn, who turned 50 last December, lamented poor putting but remains in position to lift a record third Queen’s Cup crown while Pagunsan also finished strongly with his birdie run to stay in contention for only his second Asian Tour victory.

I’m very pleased with my score, shooting three under was my target today. Birdied 16 and 18 to get to 11-under which I’m happy with the result. When we started, it was a bit tough as the wind was up but I managed to hold it together.

It was nice to play with Thaworn Wiratchant and Juvic Pagunsan, both Order of Merit winners, as I can only learn from them. Even when you hit one bad shot, you just stay patient. That’s what they do. It’s always shot by shot and taking the birdie chances when they come.

I don’t want to think about winning. I just want to shoot another 68 tomorrow. If I think of winning, there will be a lot of pressure. I just want to play good golf. Maybe someone will shoot six or seven under tomorrow and he does, he deserves to win it. If I shoot three under it is good enough for me on this course. In the past, I’ve been too tensed going into the final day when in contention. Thinking too much and wanting it too badly. This time, I don’t want to think about it. I’m playing well now. What I need is to enjoy the day tomorrow.

This is the first time I’m leading into the final round in an Asian Tour event, so it’s going to be a new experience. I’ve been one behind the leader previously a few times.

I was struggling a bit today. My shots were not really good but I saved a lot of pars, my putting was okay and it saved me. I think my experience helped me as I’ve played a long time in Asia and I just hung in there, told myself to hang in there. After I made double on four, I thought that if I can finish one or two under for the round, I’ll still be in contention.

I ddn’t putt well, making just about 60% of my putts. The greens felt a bit tougher than other days. I never putted near the hole. But I’m happy with the way I’m playing.  I may feel a bit upset now but that’s normal.

Although I have a lot of experience, I don’t think I have the advantage tomorrow over Nicholas (Fung) as he is a good player. Also there is also Juvic (Pagunsan) who is also at 10 under and several guys at nine under.

So it depends on who has the better chance and putts better tomorrow. Everyone who hit good tee shots and putts well stand a shot winning. The winds will be a factor as anything can happen on this course when the winds blows.