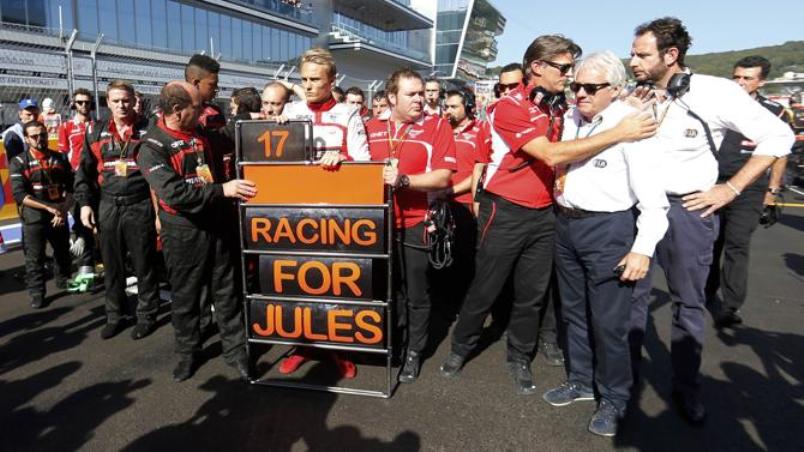 The Marussia Formula One team have slammed media reports that Jules Bianchi and team officials ignored safety measures before the horrific crash that left the Frenchman fighting for his life in Japan.

The 25-year-old collided with a recovery vehicle during the Japanese Grand Prix earlier this month.

Marussia issued a statement on Wednesday vehemently denying that he had failed to slow down when marshals waved double yellow flags after Adrian Sutil’s Sauber had skidded off at the same spot in heavy rain.

The team also angrily rejected claims made by Germany’s Sport Bild magazine citing “new information” that team officials had ordered Bianchi to speed up in order to stay ahead of Caterham’s Marcus Ericsson at Suzuka.

“The Marussia F1 Team is shocked and angered by these allegations,” said Marussia in a statement.

“At a time when its driver is critically ill in hospital, and the team has made clear that its highest priority is consideration for Jules and his family, it is distressed to have to respond to deeply upsetting rumours and inaccuracies in respect of the circumstances of Jules’ accident.”

Bianchi was rushed to a local hospital after his sickening accident and underwent emergency brain surgery. He remains in a stable but critical condition, with his family continuing to hold a vigil by his bedside.

“Regarding point 1, Jules did slow down under the double waved yellow flags. That is an irrefutable fact, as proven by the telemetry data, which the team has provided to the FIA.

“Regarding point 2, an audio copy of the full radio transmission between Jules and the team, and a written transcript, were provided to the FIA.

“It is quite clear from the transmission and the transcript that at no point during the period leading up to Jules’ accident did the team urge Jules to drive faster or make any comments suggesting that he should do so.”

Race director Charlie Whiting has said Bianchi did slow down as required, without specifying by how much. Waved yellow flags mean drivers must slow and be prepared to stop if necessary.

Formula One is considering imposing automatic speed limits as part of future safety measures to avoid a repeat of Bianchi’s accident. – Agence France-Presse