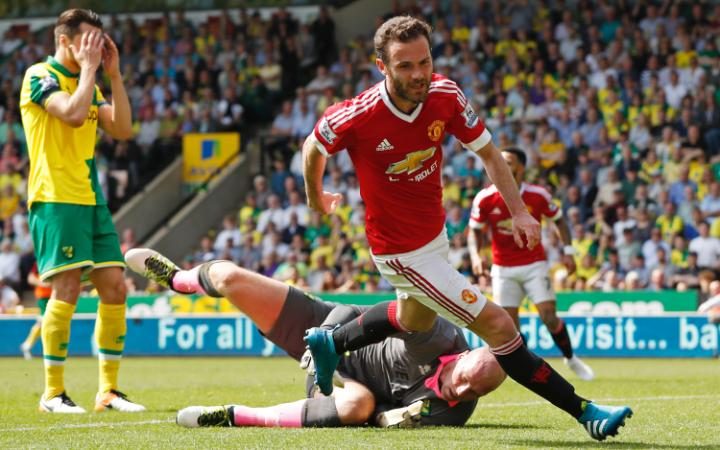 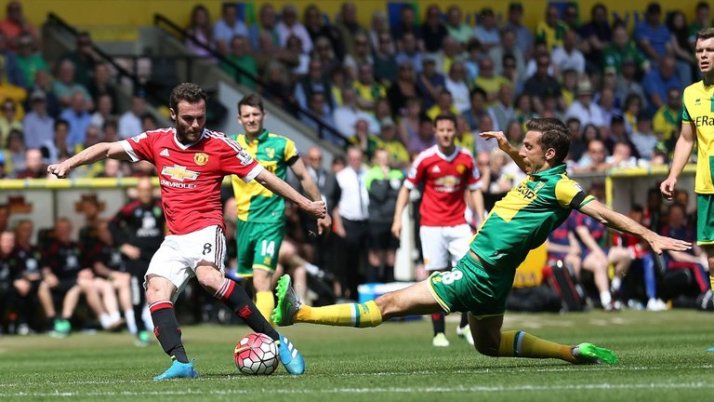 A cagey match at Carrow Road was settled by Mata’s side-foot finish in the 72nd minute after a pass from Wayne Rooney.

Victory kept United in fifth place, a point behind Manchester City, who welcome third-placed Arsenal to Eastlands on Sunday.

Norwich though are in serious trouble. They have lost four games in a row, without scoring in any of them, and it is that lack of goals which could ultimately prove costly.

The Canaries have faltered at the worst possible time, winning just two of their last 16 league games and losing 12.

Norwich next face Watford at home before a season-closing trip to Everton a week on Sunday, while FA Cup finalists United finish their league programme against West Ham United and Bournemouth.

United were dealt a blow ahead of kick-off as 15-goal striker Anthony Martial suffered an injury in the warm-up and was replaced by Ander Herrera.

Rooney was the focal point in a re-shaped United attack as Van Gaal deployed a 4-2-3-1 formation.

But Norwich, who had previously won just one of their last seven home league games, began at break-neck speed.

Roared on by thunderous support at Carrow Road, the hosts created the first chance of the match. With just three minutes on the clock, lively winger Nathan Redmond tricked his way beyond Michael Carrick and his perfect cross was headed firmly towards goal by Cameron Jerome but saved by the legs of United goalkeeper David de Gea.

United, already without midfielder Marouane Fellaini following his violent conduct suspension for elbowing Leicester City’s Robert Huth, were forced into another change when left-back Matteo Darmian was stretchered off and replaced by teenager Cameron Borthwick-Jackson following a clash with Norwich’s Ivo Pinto.

Darmian’s injury looked serious and the Italian could be a doubt for the European Championship in France starting in June.

Redmond has only scored once for Norwich this season but the former Birmingham City winger was easily their most creative player and provided the crucial link between an ultra defence-minded midfield and striker Jerome.

The Norwich duo though couldn’t penetrate the United rearguard and for large parts Van Gaal’s men were comfortable in the East Anglian sunshine.

United didn’t offer too much going forward. The excellent Carrick probed from deep while Mata flitted in and out of the game and Rooney was mostly shackled by Norwich defenders Sebastien Bassong and Russell Martin.

Norwich struggled in the second half as United cranked up the pressure and squeezed Alex Neil’s team deeper towards their own penalty area.

Neil made his tactical move just after the hour as he introduced striker Dieumerci Mbokani to partner Jerome up front in a 4-4-2 formation.

Unfortunately for the home side it was a gamble that didn’t pay off. United were far better in possession and found more space in midfield.

Then, 18 minutes from time, United scored. Bassong misjudged a long ball from right back Antonio Valencia and Rooney nipped in.

The England striker advanced into the box, swivelled and set up Mata who stroked the ball beyond home goalkeeper John Ruddy from 12 yards.

Mata enjoys playing against Norwich — this was his fifth Premier League goal against them, more than he’s scored against any other opponent, and Saturday’s effort could play a key role in relegating the Canaries.

United are yet to string three consecutive victories together in the Premier League this season but if they can record wins at West Ham and Bournemouth, Mata and co could yet have a chance of playing Champions League football next season. – Agence France-Presse