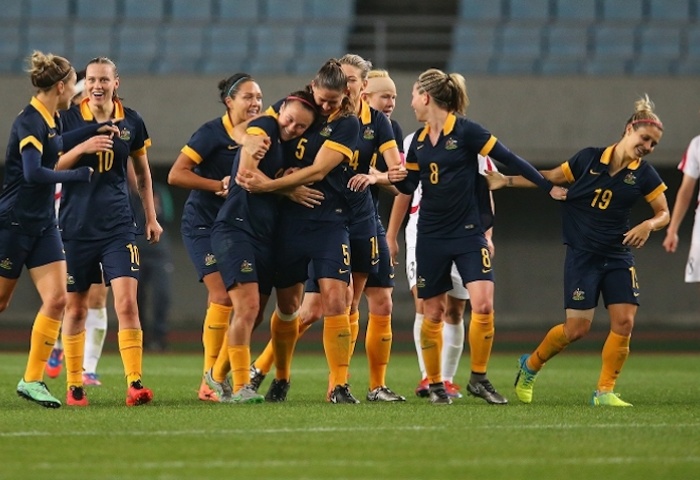 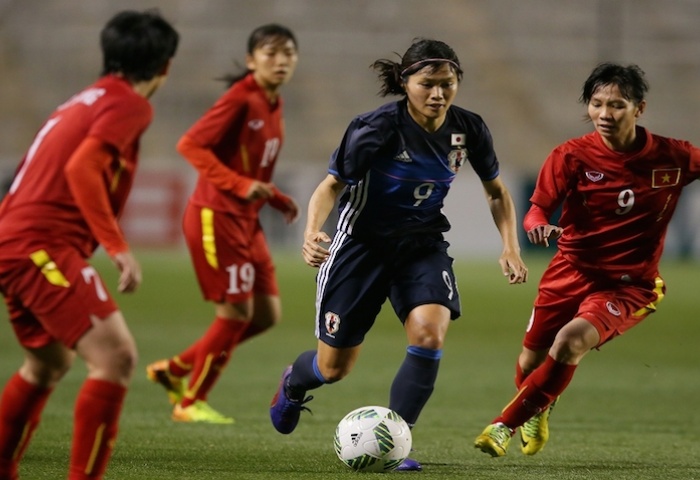 Australia qualified for the 2016 Olympic Games after goals from Michelle Heyman and Katrina Gorry sealed a 2-1 win over DPR Korea in the AFC Women’s Olympic Football Tournament Rio 2016 qualifiers on Monday.

Heyman’s 18th minute strike sent Australia into the break with a 1-0 lead and after Kim Su-gyong responded in the 78th minute, 2014 AFC Player of the Year Gorry netted seven minutes from time to send the Matildas to their first Olympic Games since Athens in 2004.

The result also ended DPR Korea’s qualification hopes with China, who defeated Korea Republic 1-0 earlier in the day, joining the Matildas as Asia’s two representatives in Brazil this August.

DPR Korea started the brighter of the pair, putting pressure on Australia with Kim Yun-mi forcing Lydia Williams into a sharp save in the 10th minute but it was the Matildas who struck first eight minutes later.

After a lengthy injury delay following a clash between Clare Polkinghorne and Kim Un-ha, Australia broke down the right through Caitlin Foord who squared the ball back across the penalty box and with the North Korean defence wrong-footed, Heyman strode forward and slotted past Hong Myong-hui to put her side 1-0 up in the 18th minute.

DPR Korea had a golden chance to level things up in the 37th minute when Kim Yun-mi’s cross from the left found an unmarked Kim Un-ju at the back post but she could only direct her shot wide of the target.

As the match wore on towards half time DPR Korea were causing the Matildas more and more trouble with Kim Yun-mi’s header smartly saved by Williams and Kim Su-gyong sending another effort wide but Australia went to the break with their narrow lead intact.

DPR Korea started the second half as they had ended the first; full of running and with an aggressive edge to their defending and really should have scored in the 55th minute when Ri Hui-jong’s cross from the right was headed back across goal where Kim Yun-mi lashed a first time shot that was well kept out by Williams at her near post.

Australia brought on the tournament’s leading scorer, Kyah Simon, midway through the half and she was immediately involved in the action, teeing up Gorry whose shot was well saved by Hong before Foord blazed over the bar with a quarter of an hour remaining.

Three minutes later and DPR Korea struck; after Ra Un-sim’s scuffed effort fell to the left of the penalty box Kim Su-gyong was left all alone and she sent a dipping effort into the far post to hand her side a lifeline.

However, with seven minutes of time remaining, Australia got the goal that confirmed their qualification.

Simon crossed from the right, Foord expertly controlled the ball near the penalty spot to lay it back to Gorry who stroked home her shot to spark wild celebrations amongst the Australian players and staff.

Despite some desperate late flurries from DPR Korea that was the way it stayed as Australia and China wrapped up qualification with a match to spare.

IN THE MEANTIME, six different scorers netted for Japan as they defeated Vietnam 6-1 on the penultimate round of fixtures at the AFC Women’s Olympic Football Tournament Rio 2016 qualifiers on Monday.

Iwabuchi gave Japan the lead in the 39th minute, and even though Huynh Nhu equalised from the penalty spot three minutes later, Ono was on hand to restore Japan’s one goal advantage in the last minute of the first half before Kawasumi, Nakajima, Yokoyama, and Ogimi added the gloss with four goals in the final 10 minutes.

“Vietnam really persevered defensively. But we kept our focus right until the last minute and as they changed players and lost a bit of concentration we were able to add to the score,” said Japan coach Norio Sasaki, whose side were already out of the reckoning for a place at the 2016 Olympic Games ahead of kick off.

“We knew we couldn’t go to Rio but looking further ahead we were aware that this will contribute towards the next World Cup and the Olympics in Tokyo.

“We can’t go to Rio but for the next three four years we have to prepare well. Asian and world women’s football is really changing.”

Both teams already knew they were unable to qualify coming into this game – with Vietnam having lost their first three matches and China’s win over Korea Republic earlier on Monday having ended Japan’s slim hopes of making it to their fourth consecutive Games – but that didn’t stop them putting on a show at Kincho Stadium.

Japan had the first opportunity in the 12th minute, when Asuna Tanaka found Mana Iwabuchi in space on the right hand side of the penalty area. The Bayern Munich forward struck a low drive beyond Dang Thi Kieu Trinh in the Vietnam goal, only to see it rebound back off the far post.

Megumi Takase also went close for Japan on 21 minutes, but could only stab her effort wide of the same left-hand post from close range after Vietnam struggled to clear a loose ball.

The reigning AFC Women’s Asian Cup holders moved in front just six minutes before half time, though, when a driven cross from Nakajima on the left was dispatched with aplomb by the arriving Iwabuchi.

Vietnam remained positive despite that concession and were soon back on level terms in the 42ndminute. Nguyen Thi Hoa was fouled by Azusa Iwashimizu in the area, and Huynh Nhu made no mistake from the spot, firing beyond Ayaka Yamashita’s despairing dive to her right.

Ono then re-established Japan’s lead on the cusp of half-time, setting herself and passing the ball into the top left hand corner from the edge of the box after being set up by Iwabuchi.

Japan had the better of things in the second half,  and the impressive Nakajima thundered an effort against the bar from 25 yards 11 minutes after the restart, before Ogimi headed over in the 73rdminute.

Yokoyama tapped in from close range following a rebound in the last minute of regular time, leaving Ogimi to volley home in stoppage time.

“Our players fought well and tried to play as much as they could, but in the last few minutes we weren’t quite fit enough. In the last 10 minutes we conceded four goals, which is why there was such a big score,” said Vietnam coach Mai Duc Chung.