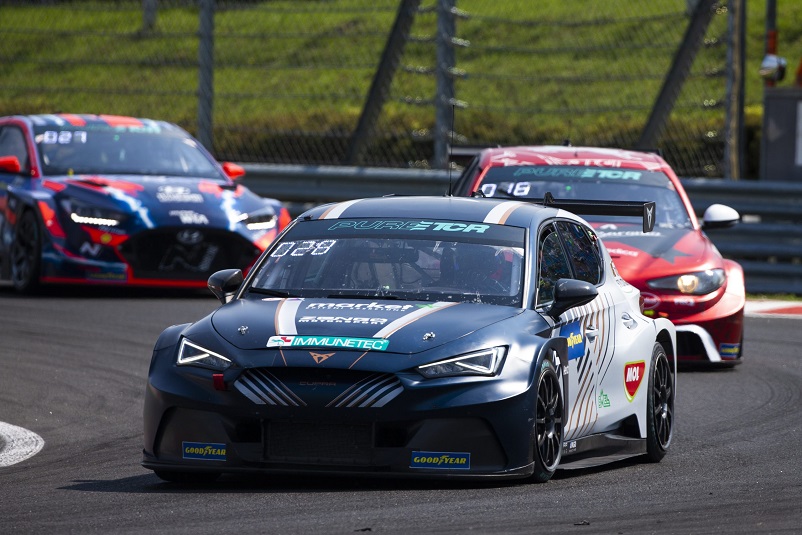 For Jordi Gené, the 2021 season has marked his full-time return to racing after a five-year absence – a large part of which was spent developing the prototype electric touring car to race in a series that would eventually be known as PURE ETCR.

Unlike his team-mates Mattias Ekström and Mikel Azcona, the experienced Spaniard has yet to claim King of the Weekend status in 2021, but has been a podium finisher in four of the five DHL SuperFinals he’s taken part in.

In France, he is the third member of the CUPRA X Zengo Motorsport team to be in with a chance of winning the world’s first all-electric, multi-brand electric touring car title.

Here’s what he thinks ahead of the season finale…

Jordi Gené: “I’m pretty happy with how the season has gone. I’d be a bit happier if a couple of things had gone a little bit better – like the very first Battle in Vallelunga when the contact with [Rodrigo] Baptista cost me some points. When you consider I hardly raced for five years before 2021, I’m really just happy to be back. The series, as a whole, has been better than anyone expected. I knew the Battle format was a good concept and I think it’s worked quite well. We all expected the performance of these cars to be impressive – and they are – but we had no idea what to expect from the racing because the cars are so different to what we’re used to and there wasn’t a big pool of data we could use to simulate it, like we could with the TCR car. It’s nice to be in a series that listens when you have a concern. We thought in the Stress Test before the start of the season that we needed a good amount of Power-Up to help the racing, so when there was no passing in Round 2 without it in Vallelunga, they changed it to make it better for the show. It doesn’t give any one car or team an advantage, it benefits everyone and creates more uncertainty in the Battles. I’ve been a bit unlucky because I’ve been grouped with the top Romeo Ferraris-M1RA driver and the top Hyundai driver pretty much everywhere, and after being drawn on pole for the first event, I’ve not even been close since, so it’s made it quite difficult to be King of the Weekend. I’ve had to have the attitude of being clever instead and not too racy. It’s worked very well.”

JG: “The first event at Vallelunga. Having not really raced properly for five years, it was like coming back to life. Even just going through the processes of arriving at the circuit, having a drivers’ briefing and doing a practice session puts the butterflies in your stomach. It was a great feeling – like opening your presents at Christmas. The first day was a bit tricky, especially after I got spun by [Rodrigo] Baptista, but by Sunday I was very comfortable.”

JG: “The Time Trial in MotorLand. We had the chance to do really well at CUPRA’s home event and I wanted it so badly that I just started over-driving; especially in the Time Trial. I knew I could have done better and I certainly had the chance to be higher up. But I calmed myself down for my SuperFinal – I knew I hadn’t forgotten how to drive – and it went much better. I had a good strategy with the Power-Up and had a lot saved for the last two laps when [Stefano] Coletti crashed into me and I had to do the end of the race quite slowly with a damaged car.”

JG: “To fight for top three, because the level is so high, especially now that the pace of all three manufacturers is closer than it was earlier in the season. Also changing between cars at the double-header events has been difficult. It’s been a tough year for me in WTCR so I’ve needed quite a lot of time to go through data with my engineer and my team-mates, so this has – of course – taken away some the time I’ve needed to do the same with the PURE ETCR car. Running from one garage to the other – sometimes at opposite ends of the pitlane like in Hungary – trying to adapt to different corner speeds, lines, braking points… It’s a big challenge. If you had to do it once in a season, that’s one thing, but at more than 50 per cent of PURE ETCR events… That’s a real disadvantage. It’s not so much the adapting your driving, it’s not having the time to spend on working out where to improve the car, because you’re already in the other racing car in another session by that point. I’ve been racing for over 30 years so the experience I’ve built up of racing all different types of cars means I can usually reach a good decision faster than someone with less experience, but it’s still not easy.”

JG: “You’ll never believe this, but the first time I ever drove a proper racing car was at Pau-Arnos! It was 1986 and I was 16 years old. I’d just won the Spanish Championship in go-karts and my father gave me a present of an afternoon in a formula car, which was one of the cars from the Thierry Cangas Racing School that was based at the track. We didn’t have anything like this in Spain and the track was brand-new at the time, so we found out it existed and drove the few hours to get there. I wish I could remember how the track went as maybe it would be a big advantage now. All I remember is sitting in the car and thinking, ‘wow, I’m in a real formula car,’ but being so small I struggled to reach the pedals and see out of the car at the same time. The track was up and down and up and down again, but I don’t really recall anything else. Unfortunately I never took any pictures either because I never thought in my wildest dreams that I could make a career from driving racing cars. I thought that would be my one time.”

JG: “I think it will be Mattias. Not only because he’s at the top of the standings, but he has the experience you need to win a championship. He’s a very cool guy and very intelligent. This is such an open championship with so many things that could happen, so even for him, it’s not done yet, but I think he’ll do it. I’m lucky to have two such strong team-mates also battling for the title in Mattias and Mikel. Mikel is the fastest team-mate I’ve ever had. He drives something pretty much every weekend, and if he’s not in a real racing car, he’s on the CUPRA simulator or racing esports. I think he must have been born with a steering wheel in his hand! The structure of the relationship between CUPRA Racing and Zengo Motorsport for the engineering and maintenance of the cars has been very good and given us the ability to get the very best from the car almost everywhere. It’s been one of the keys to the success this year and if we hopefully win the Drivers’ and Manufacturers’ titles in France, everyone will deserve it for the work they’ve done.”