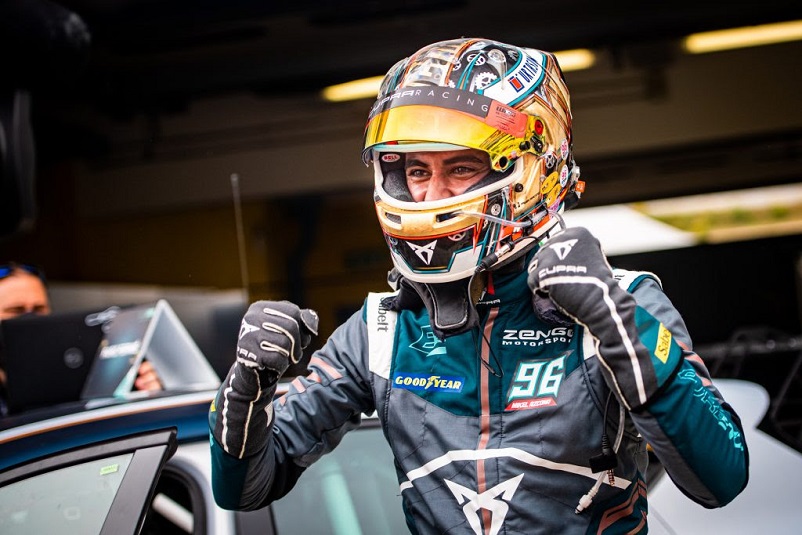 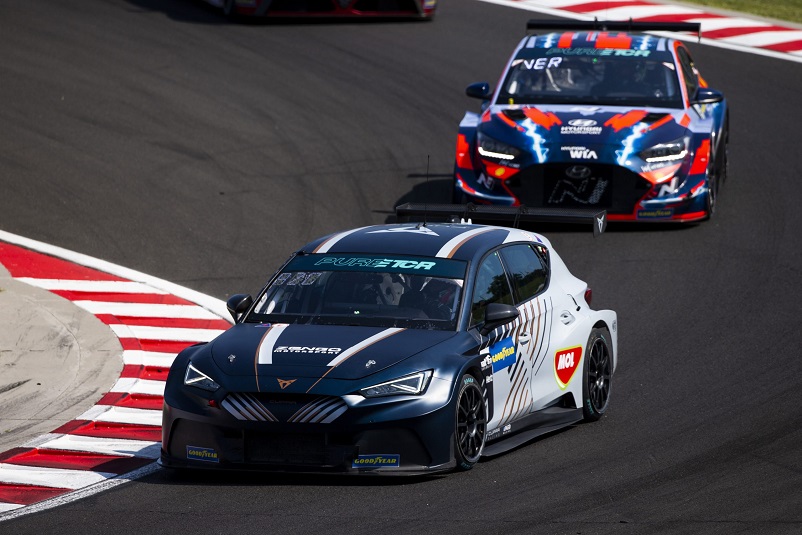 Mikel Azcona made history at Vallelunga by winning the inaugural PURE ETCR event and is the only two-time King of the Weekend so far in the world’s first all-electric touring car series.

Lying third in the Drivers’ Standings, 35 points behind CUPRA X Zengo Motorsport team-mate Mattias Ekström with 77 up for grabs, the Spaniard uniquely is the one driver in the field who cannot go wheel-to-wheel with the Swede due to PURE ETCR’s car-sharing format.

Despite this, he is determined to fight as hard as he can to make sure that the Drivers’ and Manufacturers’ titles come to Spain, as we found out when we caught up with him this week.

Mikel Azcona: “At the beginning I was not optimistic because I was new to these cars; rear-wheel-drive, lots of power through the rear axle… It was a bit daunting. But from the first time I jumped in the CUPRA e-Racer I was comparing the laptimes to the other drivers and actually they were quite similar. Suddenly I found I could adapt quickly and this meant I had a lot of confidence my own abilities. Right from winning King of the Weekend in Vallelunga, I could see I was one of the very fastest drivers, and I’ve never doubted that since.”

MA: “The first meeting in Vallelunga; especially starting in last position in my SuperFinal after the puncture in the Time Trial and then winning King of the Weekend. It was great to start like that because I thought ‘I knew we had great potential, but now we can see we are fast too!’ Hungary was great too and I felt very strong battling with [Jean-Karl] Vernay in the SuperFinal. Even in Aragon things were going great in the rounds until the contact from [Augusto] Farfus in the SuperFinal. When you’re sat at home and looking at the results breakdown, you think ‘wow, I’ve won almost every Battle I’ve been in’!”

MA: “You might think I’d say Aragon; and it’s true that I might lose this title because of what happened there with Farfus, but you don’t think about that in the heat of the moment. You can’t. Sometimes things like this will happen. So the low point was Copenhagen. I just didn’t feel I was at the same level as at the first coupe of meetings. I didn’t think it was me; it was more that we tried to improve the car and went a very specific way with the set-up. It just didn’t work, because normally I drive the car in a certain way, so I lost a bit of confidence that weekend and of course I didn’t want to crash because that can cost not only me, but Mattias as well in the championship because we share the car. But for the next event in Hungary we had the car back to normal again with a good set-up and the confidence came back, which was very important in winning that weekend.”

MA: “Adapting to the car in wet conditions. It’s heavier than a TCR and the Goodyear tyres we use are all-weather, so they have been designed as more of a compromise than a specific wet tyre. It can get pretty slippery out there, plus there’s no differential so you can lock up the wheels more easily. It’s the most challenging car I’ve ever driven. Having the double-headers has been quite tough too. Originally, I think there were two, but that number went up when the calendar changed. You want to have enough time to analyse the data and the videos with your engineer, but if you have to keep going on-track in the PURE ETCR car and then the WTCR car and then the PURE ETCR car again, it’s quite tough – especially as the cars are totally different in terms of braking points, power management, steering input… It’s not so bad with the WTCR car because I’m very familiar with that type of vehicle, but the PURE ETCR car is one I’d like to have more time to study with the team.”

MA: “I have never been there, so I know nothing. I was preparing myself by watching videos on YouTube; races and on-boards. The only thing I know is it’s two hours from my house and I have a lot of friends who have done trackdays there, but I’ve never gone with them.”

MA: “A CUPRA driver certainly. I hope it’s me, but at the same time Mattias is very strong and is leading the points, so if I can’t win, I hope it’s him. It’s quite strange to be battling against a driver that I’ve never actually raced against this year. We share a car so it’s not possible to be drawn in the same Pool. If I could race against him then I’m sure I could take some points away from him, but that’s not possible. If he has a problem with his car, it probably affects me too, but we’ve been very reliable all year, so I hope that continues.”