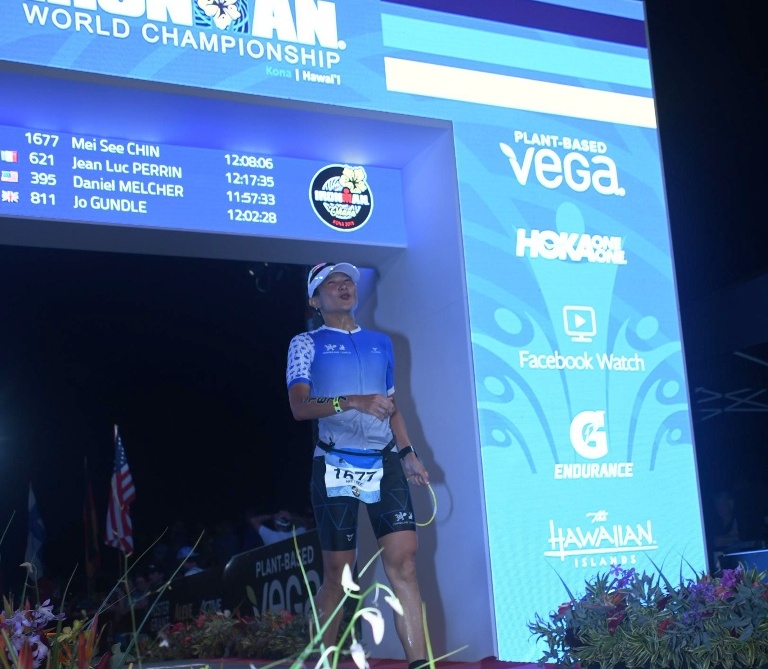 The pocket rocket dynamite describes her experience as

Chin Mei See can be regarded as one of the most inspiring Malaysian female athletes of 2019.

She may not be as popular as some of the mainstream athletes like Farah Ann Abdul Hadi (gymnast) or Leong Mun Yee (diving) who have qualified to the Tokyo Olympics next year, but Mei See is a legend in her own right after becoming the only Malaysian female to qualify for the 2019 VEGA Ironman World Championship in Kona, Hawaii, which was held recently from October 11-13, 2019.

The 41-year-old booked her berth to IRONMAN’s pinnacle showpiece this year via the 2018 IRONMAN Gurye Korea race.

Fast forward a year, and the RC Coaching graduate held her own amongst the world’s finest triathletes to finish 60th in her age group with a time of 12:08:06.

The soft-spoken engineer described Hawaii as an experience of a lifetime.

“It was my first time to the Big Island, and I was excited as soon as I landed there! I felt the Aloha spirit from the start, with the friendly ground crews and immigration officials welcoming me,” started Mei See.

“The island was simply magical too, with so many beautiful beaches that were not populated! At Kailua-Kona (race venue), it was filled with participants and huge crowds eager to see us in action. It was like a carnival-like atmosphere, with people busy shopping, and having photo sessions with the pros.”

“There were participants training every hour along Alii Drive, and everyone looked fit and are good shape regardless of their age.”

Despite revelling in the atmosphere, Mei See felt she could have done better at the World Championships.

“My goal was to finish in the range of 40th (spot). Unfortunately, I failed to meet the mark and was disappointed. I did not do too well in 2019. During this season, I had missed many sub-four marathons, and will need to regain my confidence again. The most important lesson I learnt this year is to let my injuries fully recover.”

While Mei See stood out at IRONMAN Malaysia a year ago, she defines Kona as a different ballgame altogether.

“I was only at an average level in Kona, in terms of physical and mental strength. I hardly overtook anyone in the bike, while an older age grouper overtook me in the run. But it’s all an experience and something for me to improve on.”

Like most triathletes, Mei See’s ambition was never about putting herself through gruelling routines.

In fact, she concedes that her road to fitness only began upon university graduation where she started short distance running.

2011 was the game changer, when she competed at the Olympic Distance (OD) Kenyir Lake triathlon. That bold decision let to more OD and triathlon events, which ended up in more physical agony.

“I suffered in the early years of triathlon in OD. Slow swims with bad sighting, weak cycling, and walking for parts of the run.

“I later got to know IRONMAN from friends, and I thought it was inhumane to do a 3.8km swim, 180km cycle and a 42km marathon. But their stories inspired me, and I joined IRONMAN in 2015.

“I can tell you, the decision to join IRONMAN has been simply life-changing. The fear of Did Not Finish made me serious and disciplined in training. I would wake up earlier on weekends than on working days. I changed from a night to a morning person.

“Weekend food indulgences and entertainment expenses became bicycle, nutrition and race expenses. I was conscious about my food. I began eating healthy, less meat and less sugar. IRONMAN made me choose a healthier lifestyle and maintain a healthy weight.”

After a substandard year by her high standards, Mei See is bent on fulfilling her goals in 2020.

“My biggest target would be to finish in sub 11-hours in my home country at next year’s IRONMAN Malaysia. 2019 has not been the best, but it is a year that has taught me some good lessons to improve on.

The Perak-lass also has some sound advice for Malaysians who want to emulate her feat with an appearance at the World Championships.

“It’s good to check through the top five results for your age-group for races in the region. Their results are a good benchmark to see where you stand and how big the gap is. If the gap is big, then be patient and have a longer-term plan to get there.”

Mei See is a late bloomer that has gone on to feature at the world’s most elite triathlon stage.

She is a living testament that no obstacle is too big, as long as you dare to dream big.