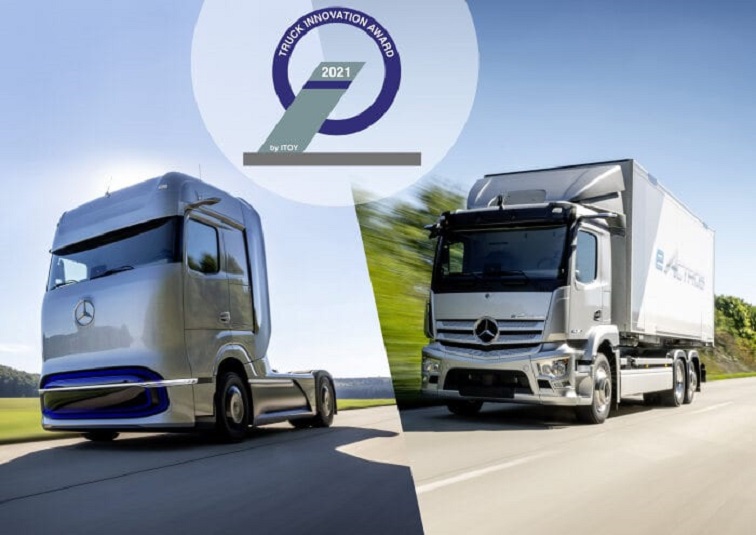 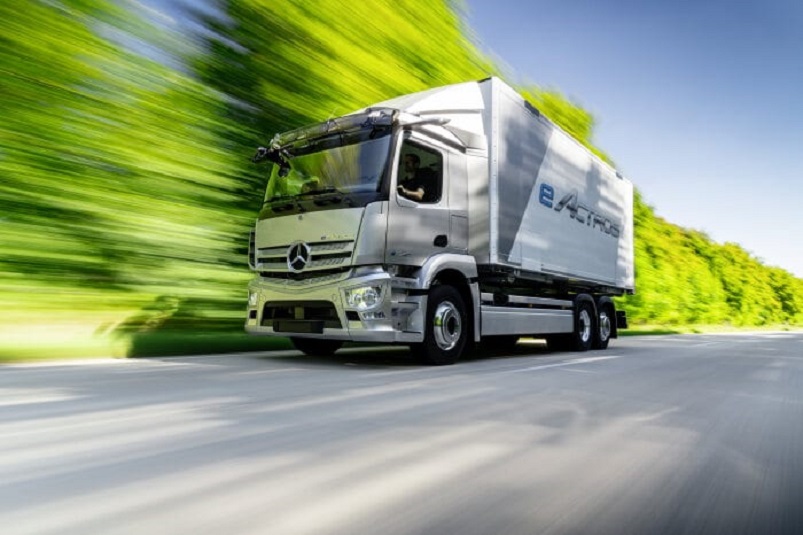 Stuttgart – The most innovative trucks for the electric future bear the three-pointed star – that’s the verdict of the renowned International Truck of the Year (IToY) jury, which awarded its prestigious 2021 Truck Innovation Award to two trucks from Mercedes-Benz: the battery-electric eActros and the fuel-cell concept Mercedes-Benz GenH2 Truck.

Daimler Trucks was the first manufacturer worldwide to present a heavy-duty electric truck with a concept for urban distribution in 2016. In 2018, the eActros prototype premiered and intensive customer trials started the same year. The series-production eActros planned for 2021 will have a range of well over 200 kilometers. In September 2020, Daimler Trucks presented the Mercedes-Benz GenH2 Truck, a fuel-cell concept truck for a range of up to 1,000 kilometers and more in its series version, for demanding long-haul transport. Customer trials are planned to begin in 2023 and the start of series production is planned for the second half of this decade.

Martin Daum: “We are honored and proud that the renowned International Truck of the Year jury has recognized our eActros and our GenH2 Truck with the prestigious 2021 Truck Innovation Award. This is strong affirmation that we’re on the right track with our strategy clearly focusing on genuinely locally CO2-neutral technologies: battery power and hydrogen-based fuel cells. This combination enables us to offer our customers the best vehicle options, depending on the application. With the eActros, we have demonstrated in recent years that locally CO2-neutral urban distribution is already possible today. And with our GenH2 Truck, we have additionally presented our specific concept for heavy-duty fuel-cell trucks to perform flexible and demanding long-distance haulage.”

Also in September this year, Daimler Trucks presented its technology strategy for the electrification of its vehicles, ranging from urban distribution to international long-haul transport, thus reaffirming its commitment to the goals of the Paris Climate Protection Agreement. As part of this comprehensive approach, Daimler Trucks also features for the very first time its new worldwide modular platform architecture, the so-called ePowertrain, which, among other things, was also particularly appreciated by the jury.

Findings from the Mercedes-Benz eActros customer testing have flowed directly into the further development of the prototype into a series-production vehicle. So far, they have shown that the purely battery-electric eActros is outstandingly suited for sustainable heavy-duty distribution transport. It is in no way inferior to a conventional diesel truck in terms of availability and performance. However, the series-production eActros will be significantly superior to the current prototype in some aspects, such as range, power and safety. The series-production eActros will be on a par with a conventional Actros also in terms of payload and will be launched as a two-axle and three-axle truck. Daimler Trucks will embed the vehicle in a holistic ecosystem that includes consulting services for electric mobility such as analyzing routes, checking possible subsidies, supporting operational fleet integration and developing suitable charging-infrastructure solutions.

In 2020, Daimler Trucks has also presented a preview of a purely battery-powered long-haul truck, the Mercedes-Benz eActros LongHaul, which is designed to cover regular journeys on plannable routes in an energy-efficient manner. Daimler Trucks plans to have the eActros LongHaul ready for series production in 2024. Its range on one battery charge will be approximately 500 kilometers. 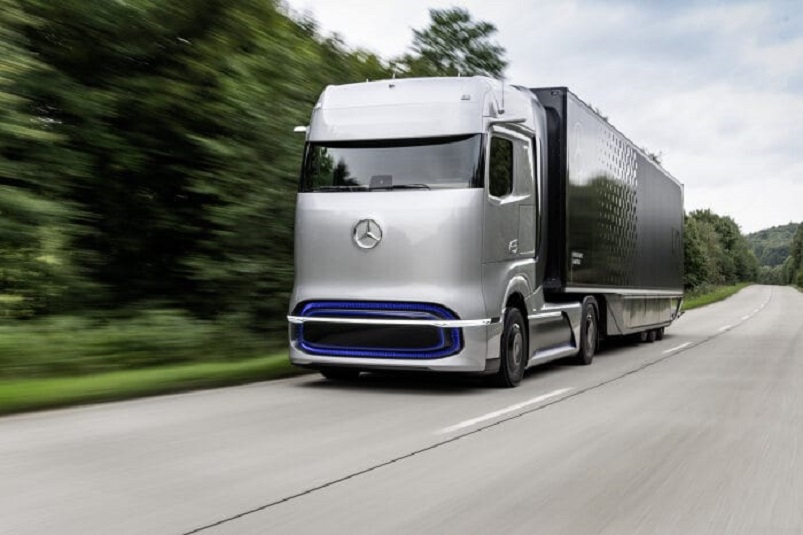 The development engineers at Daimler Trucks have based the Mercedes-Benz GenH2 Truck on the capabilities of the conventional Mercedes-Benz Actros long-haul truck with regard to tractive power, range, and performance. For example, the series-production version of the GenH2 Truck is to have a gross vehicle weight of 40 tons and a payload of 25 tons. Two special liquid-hydrogen tanks and a particularly powerful fuel-cell system will make this high payload and long range possible, and therefore form the core of the GenH2 Truck concept.

Daimler Trucks prefers to use liquid hydrogen (LH2) because in this state, the energy carrier has a far higher energy density in relation to volume than gaseous hydrogen. As a result, the tanks of a fuel-cell truck using liquid hydrogen are much smaller and, due to the lower pressure, significantly lighter. This gives the trucks more cargo space and a higher payload. At the same time, more hydrogen can be carried, which significantly increases the trucks’ range. This makes the series GenH2 Truck, like conventional diesel trucks, suitable for multi-day, difficult-to-plan long-haul transport and where the daily energy throughput is high.