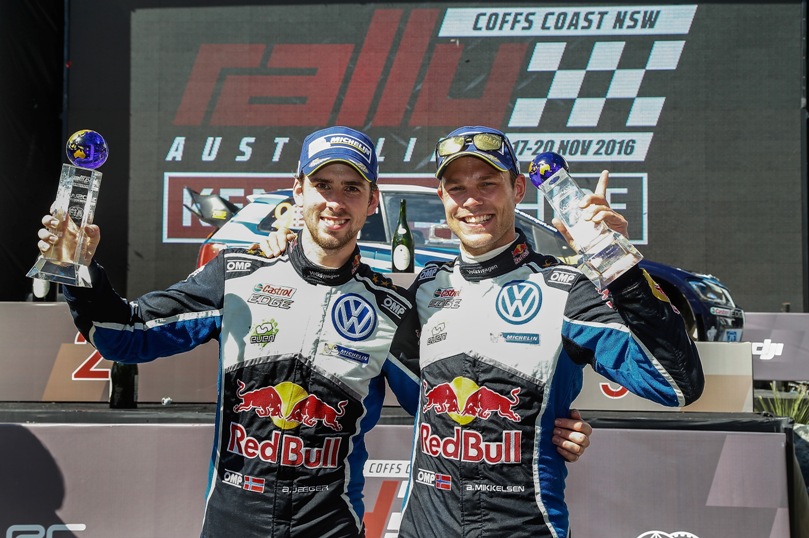 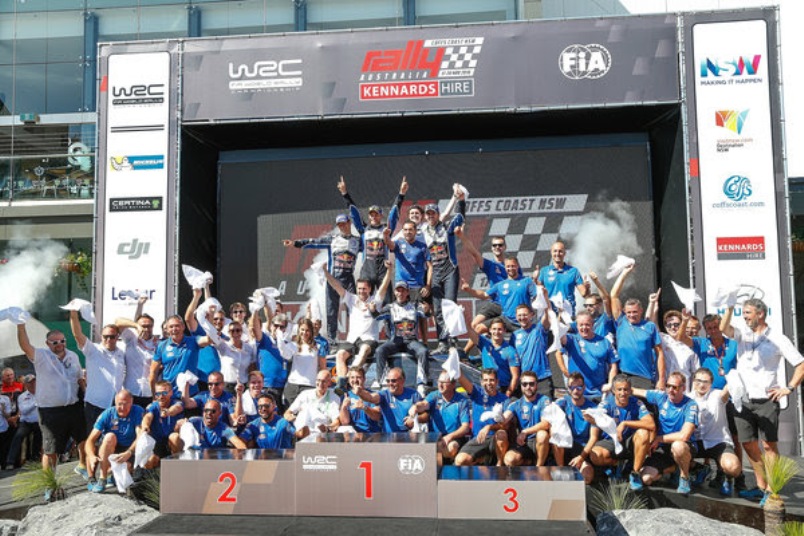 A force down under: Mikkelsen claims third WRC win after battle with Ogier

The story of Volkswagen in the WRC ended with an exclamation mark: Andreas Mikkelsen/Anders Jæger (N/N) gave the most successful car in the history of the FIA World Rally Championship (WRC) a worthy send-off with another win at the Rally Australia. Victory in the Polo R WRC’s 52nd rally was both spectacular and hard-fought – and featured a close battle with Volkswagen team-mates Sébastien Ogier/Julien Ingrassia (F/F), who celebrated four titles in the Driver’s and Co-Drivers’ Championship with the world rally car from Wolfsburg.

The French pair also won the Manufacturers’ Championship four times with fellow Volkswagen duo Jari-Matti Latvala/Miikka Anttila (FIN/FIN). The final hurrah down under developed into a real thriller, in which Mikkelsen/Jæger held his nerve to come out on top thanks to a magnificent performance.

After four years at the top of the pinnacle of rallying, Volkswagen bids farewell to the most prestigious automobile world championship outside Formula 1 with an impressive record.

The best rally car ever made – the Polo R WRC

958 special stages, 640 stage wins. 52 rallies, 87 podium finishes, including 43 victories. 51 Power Stages, bonus points on 92 occasions. As far as the success rate is concerned, the Volkswagen Polo R WRC is by far the most successful WRC car ever. Between the moment that Jari-Matti Latvala set off on the world rally car from Wolfsburg’s first special stage – at 09:07 on 16 January 2013 – and Andreas Mikkelsen crossing the finish line for the final time in the Polo R WRC at 13:47 and 51 seconds local time, the Volkswagen drivers have completed 48,723.52 kilometres of special stage. That is almost exactly three times the distance between Ikarusallee 7a in Hannover and the Volkswagen service area in Coffs Harbour. There is a strong team behind this success: as well as the team at the rallies and the 200 employees in Hannover, the technical development department in Wolfsburg and the partners of Volkswagen Motorsport have also contributed to the historic success.

Milestone, not melancholy: hard-earned victory for Mikkelsen after battle with Ogier

Extreme dust, the task of sweeping clear a thick layer of loose gravel, and the intelligent management of the race tyres – the crews at the 2016 Rally Australia faced a wide range of challenges. Andreas Mikkelsen/Anders Jæger led the field of world rally cars for 94.1 per cent of the 283.36 kilometres against the clock. Their duel with four-time world champions* Ogier/Ingrassia was one of the finest seen in rallying in recent years. What made it all the more remarkable was the fact that neither of the two Volkswagen duos had favourable starting positions.

One goal achieved, one narrowly missed – Mikkelsen/Jæger finish third in the world championship

Jari-Matti Latvala/Miikka Anttila (FIN/FIN) in the third Polo R WRC were denied a happy ending at the final rally of the year. They damaged their suspension when they brushed a barrier on a bridge at the very start of the rally. Despite losing over seven minutes, last year’s runners-up in the World Rally Championship fought their way back into the points and ended the Rally Australia in ninth place.

Icing on the cake in a Volkswagen domain: Ogier wins the Power Stage

Volkswagen once again dominated the Power Stage, on which bonus points are awarded to the top three drivers and co-drivers. The stage win in Australia went to a Volkswagen duo – Sébastien Ogier/Julien Ingrassia – for the 39th time. In total, extra points have gone to Wolfsburg on 92 occasions. For Ogier/Ingrassia, this was the 33rd Power Stage win of their career.

Quotes after day three of the Rally Australia

Sébastien Ogier, Volkswagen Polo R WRC #1
“I was a bit wide exiting a left-hander at the end of the ‘Wedding Bells’ stage, and spun. In the huge dust cloud, it took me a few moments to work out where the road was. We lost almost 20 seconds as a result. However, I have no regrets. Julien and I were really going for it all weekend, and had had a great battle with Andreas up to that point. He deserved the win. The most important thing is that our fantastic team bids farewell to the World Rally Championship with a victory. This is a very emotional moment for me. I have so much to thank the team for. Volkswagen Motorsport has been like a family to Julien and me. I have made a lot of friends and will never forget the wonderful moments we have had together over the past few years. A fantastic journey is coming to an end, and I am proud to have been a part of it.”

Jari-Matti Latvala, Volkswagen Polo R WRC #2
“I enjoyed the final few kilometres in the Polo R WRC on today’s Power Stage. We had some good special stages today and yesterday, and made good progress through the field. We can be happy with our performance over the past few days. Unfortunately, we made light contact with a wall on a bridge on the opening stage, and destroyed the rear suspension in the process. We lost a lot of time as a result, and had no chance of challenging for either the podium or the win. I would have liked to have done that – primarily to give our team a fitting leaving present. Our team-mates Andreas Mikkelsen and Sébastien Ogier claimed a deserved one-two. Congratulations to them both. We will celebrate as a team again this evening, before our time together in the World Rally Championship comes to an end. It is sure to be very emotional.”

Andreas Mikkelsen, Volkswagen Polo R WRC #9
“What a fantastic weekend, and what a wonderful result at the end of our season. Today has been a very special day, as it was our last appearance as a team. I was so desperate to win this rally for Volkswagen. It is fantastic to have achieved that. Volkswagen is the team that gave me the opportunity to step up into the top class of the WRC. They put a lot of faith in me and made so much possible for me. They will always have a special place in my heart. Everything came together at the final rally. Everything, absolutely everything, worked perfectly – it was simply the optimum of what we have achieved together in four years in the World Rally Championship. On the one hand, it is a bit of a shame that we just missed out on second place in the championship. On the other hand, that is not so important. If I had been given the choice of winning our final rally together or finishing runner-up in the world championship, I would always have chosen the win.”

Sven Smeets, Volkswagen Motorsport Director
“Today is a very successful day for Volkswagen on the one hand, and an emotional goodbye to the world rally championship on the other. To bid farewell with a one-two is simply fantastic. Despite the difficult situation, the entire team gave their all and was thoroughly professional right down to the final metre. I am incredibly proud of our performance here at the Rally Australia – and over the past few years. I would like to thank everyone in Hannover, Wolfsburg and at the rallies, as well as our partners, who have all contributed to our success. We have achieved a lot and head into our future in motorsport full of confidence.”

… Julien Ingrassia’s selfie marathon. As Volkswagen’s WRC programme drew to a close, the four-time world champion co-driver set about taking a selfie of himself and every single member of the team at the rally, as a lasting reminder of the four years together.

… one driver who had been a part of Volkswagen’s WRC project from the word go: Andreas Mikkelsen. His first start for the team came in Finland in 2011 when, as a young driver looking to stake his claim for a works seat, he took part in the first test for Volkswagen Motorsport in a car from group brand Škoda.

*subject to confirmation from the FIA.