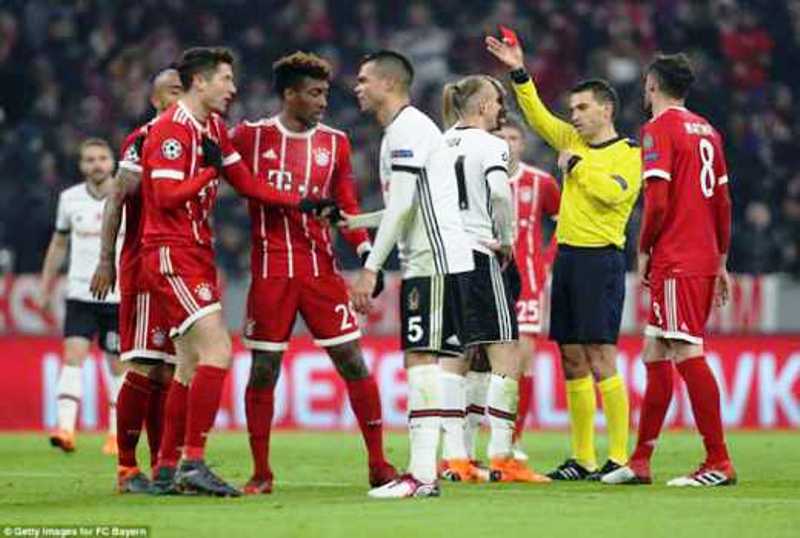 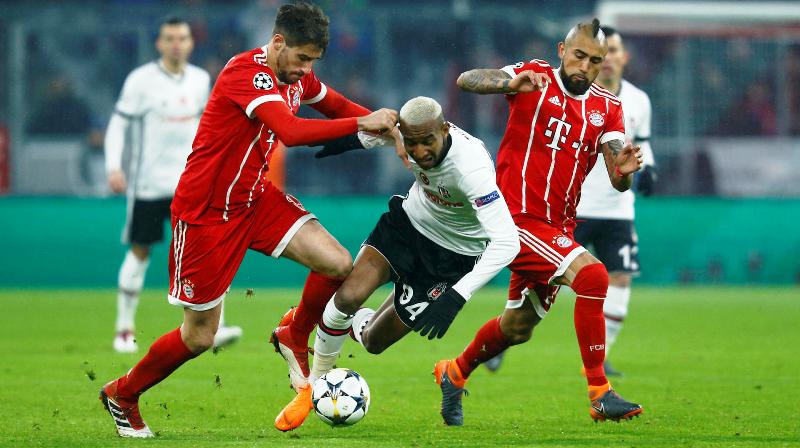 Disaster struck for Besiktas after just 16 minutes at Munich’s Allianz Arena when Domagoj Vida was sent off for bringing down Lewandowski as the Poland striker was through on goal.

The floodgates opened after the break at Munich’s Allianz Arena as Kingsley Coman struck before Mueller poached his second.

Bayern claimed their fourth on 79 minutes when Lewandowski pounced on a rebound after defender Mats Hummels’s long-range shot was parried.

Mueller then weighed in with an assist to set up Lewandowski for the fifth just before the final whistle.

“The most important thing was to get a good result and the red card helped, even if we couldn’t make much headway in the first half,” said Mueller as Bayern claimed their 14th win in a row.

“That changed — thank God — in the second half, we were much more aggressive in attack and we made the extra man count.”

Besiktas, making their debut in the knock-out stages of the Champions League, face a near impossible task in the return leg in Istanbul on March 14 if they are to prolong their European adventure.

Bayern made a bright start when Coman’s curling shot forced Besiktas goalkeeper Fabri into a save on nine minutes, Joshua Kimmich’s free-kick was then headed wide by Arturo Vidal.

But Besiktas were the architects of their own downfall as a poor pass from skipper Atiba Hutchinson was snapped up by Lewandowski, who was sent tumbling by last man Vida as he closed in on goal.

Despite the dismissal of the Croatia defender, Bayern initially struggled to make the advantage count as the Besiktas defence, marshalled by Portugal veteran centre-back Pepe, refused to buckle.

The Turkish champions created chances of their own as winger Ricardo Quaresma beat Bayern centre-back Hummels before firing wide, while Pepe shot over the bar.

But Bayern broke the deadlock when Coman whipped in a cross and David Alaba flicked the ball to Mueller, who tapped the ball through Fabri’s legs on 43 minutes.

Colombia playmaker James Rodriguez went off with a calf injury just after the goal, replaced by veteran winger Arjen Robben, a surprise exclusion from the starting side, in a move that pushed Mueller more central to accommodate the Dutchman.

Bayern maintained the pressure following the restart as Lewandowski hit the post with a free-kick four minutes into the second half.

The Poland forward turned provider for Coman’s goal, passing back inside after being put in behind the defence by Mueller.

With the Besiktas defence worrying about Mueller and Vidal, Coman steamed into the area unmarked to slam home Bayern’s second goal on 52 minutes.

It had little effect though as Bayern grabbed their third when Kimmich’s cross was met by Mueller at the near post on 66 minutes.

A speculative Hummels shot was then kept out well by Fabri, but Lewandowski was on hand to tuck away his 28th goal of the season in all competitions on 79 minutes.

Mueller and Lewandowski combined for Bayern’s fifth goal when the Germany forward squared for his Polish team-mate to cap the rout two minutes from time. – Agence France-Presse