Home International Murray gets on the ball to advance at Miami 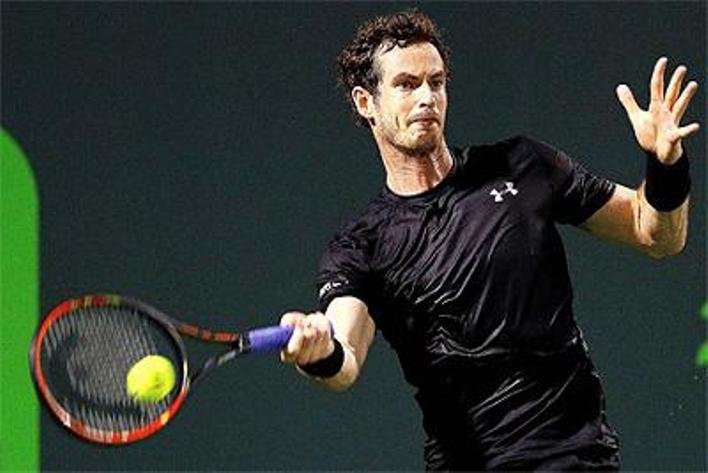 Something didn’t look right about the tennis ball in Andy Murray’s grasp and when he looked at it he discovered it was from the women’s tour, not the men’s.

That second-set revelation, and taking the ball out of play, helped the British world number two finish off a 6-3, 7-5 triumph Saturday over Uzbekistan’s 76th-ranked Denis Istomin at the ATP and WTA Miami Open.

The ball controversy began when Murray, trying to avoid being broken in the fifth game of the second set, noticed the ball in his hand bore a red logo used only on a WTA ball, not the black one on ATP balls.

“I just saw it as I was about to bounce the ball,” Murray said. “There was just a women’s ball. I had just hit two balls long. They are smaller, livelier balls and when you are just about to serve at break point down, you don’t want to use a completely different ball.

“I was a bit frustrated over that.”

Murray said he could not be certain that the women’s ball was the one used when he hit two crucial shots long to set up Istomin’s break chance.

But the 28-year-old Scotsman did complain to chair umpire Mohamed Lahyani of Sweden that he and Istomin likely had been playing with the improper ball, one designed to go farther, for at least a couple of points.

The ball was taken out of play but some spectators whistled their irritation, seeing Murray’s talk as a delay tactic.

“I felt like he should say something to the crowd because it looked like I was stalling intentionally. I did have an issue,” he said. “It’s not his fault. He can’t see if it’s a women’s ball or not. It’s difficult.”

An upset Murray netted a forehand to give Istomin the break and a 3-2 lead.

Murray gave Lahyani an earful when he came to sit down.

“For me, that’s not good enough,” Murray said. “Unacceptable. It’s not right.”

“I’m hitting the ball long because it’s the wrong ball. You know how different the balls are.”

“The point stands,” Lahyani replied. “It’s the same for both.”

Murray responded by breaking back in the next game, denying Istomin on a break point in the 11th game with a backhand drop volley and breaking again in the final game, Istomin netting a forehand to end matters after 98 minutes.

But Murray still had no idea how the women’s ball got mixed among those used by the men, speculating that it lurked in flower beds near the court after a women’s match and was found and inserted by ballpersons.

“I don’t know where it came from,” he said. “Throughout the day a bunch of balls end up in the flower beds. It could have come from them.”

– Dimitrov next for Murray –

Next to face Murray is Bulgarian 26th seed Grigor Dimitrov. Murray has a 6-2 career record against Dimitrov, having won their past three meetings, most recently in last year’s round of 16 at Cincinnati.

“He had a match point and a bunch of chances to win that one but I was able to turn it around,” he said. “I’ll have to be a little bit more disciplined than I was tonight.

“It’ll be a tough one. He’s a top quality player.”