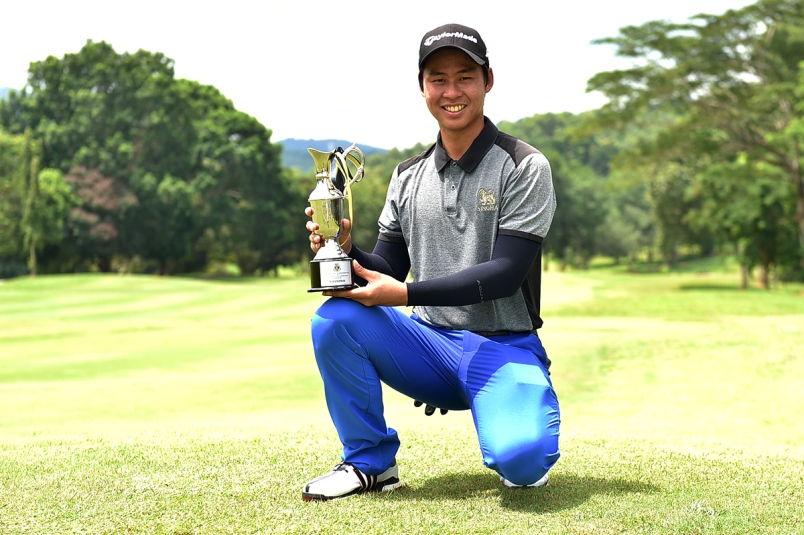 Thailand’s Nattawat Suvajanakorn fended off the stiff local challenge by firing a flawless seven-under-par 65 to earn his maiden breakthrough on the Asian Development Tour (ADT) at the PGM Darulaman Championship on Saturday.

Nattawat’s winning total of 16-under-par 272 secured him a three-shot victory over local heavyweights Danny Chia and R. Nachimuthu who signed off with a 66 and 68 respectively to share second place at the RM200,000 (approximately US$44,600) Asian Development Tour (ADT) event which is jointly sanctioned with the Professional Golf of Malaysia (PGM).

Overnight leader Liu Yan-wei of China, who could have become the first Chinese player to win on the ADT had he won, closed with a 70 to finish in fourth place at the Darulaman Golf and Country Club.

Starting his final round one shot behind Liu in second place, Nattawat made his swift charge with two birdies in his opening three holes. He extended his advantage with further birdies on holes five and eight.

The 21-year-old, who had Chia and Nachimuthu hot on his heels after the turn, maintained his composure and continued to assert himself with three more birdies on holes 11, 15 and 17 before clinching his first professional victory in the most deserving way.

“There was a lot of pressure on me today. Danny and Nachimuthu are really good players and I had to stay very focused. I told myself I could not afford to drop any shots as they can easily overtake me.

“I concentrated really hard and I’m glad I won and can relax now. This victory means a lot to me as it is my first win as a professional,” said Nattawat.

The PGM Darulaman Championship, by featuring on the ADT calendar, was accorded Official World Golf Ranking status, with Nattawat receiving a minimum of six points and the top-six players and ties earning points on a sliding scale.