Home 2022 ‘No Turning Back’ for Formula E as Season 8 campaign launches cinematic... 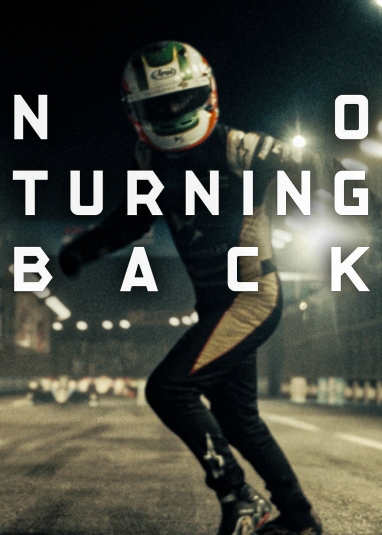 Formula E today unveils a powerful new campaign, ‘No Turning Back’, capturing the drama and intense sporting rivalries of drivers and teams as Season 8 of the ABB FIA Formula E World Championship begins this week.
‘No Turning Back’ is a season-long campaign, setting the tone for the all-electric Championship’s journey into a new era ahead of the Season 9 debut of the Gen3, Formula E’s fastest, lightest, most powerful and efficient racing car ever.
The high-energy film produced by London-based creative studio, Uncommon, shows the world that the competition between drivers to win the ABB FIA Formula E World Championship is part of a bigger, relentless race to fight climate change through the adoption of electric mobility solutions.
‘No Turning Back’ builds on the ‘Change. Accelerated.’ positioning Formula E launched with Uncommon last year which encapsulates Formula E’s vision to accelerate sustainable human progress through the power of electric racing.
As the pinnacle of electric motorsport, the unpredictable, highly-competitive, dramatic city centre racing of the ABB FIA Formula E World Championship is underpinned by equally powerful reason.
Recognising the impact of sport as a force for good, Formula E was founded to counteract climate change by accelerating the adoption of electric vehicles, a mission which has since evolved to an all-encompassing race for better futures, aligned with the FIA’s commitments.
Formula E will deliver that message globally in Season 8 with the biggest race calendar yet featuring 16 races in iconic city centres around the world including Mexico City, Berlin, Rome, New York, London, Monaco and for the first time ever, Jakarta, Vancouver and Seoul. The season begins with an E-Prix double-header in Diriyah, Saudi Arabia, on 28 and 29 January.
‘No Turning Back’ reflects the spirit of commitment to sporting competition and to the mission of a better future in an epic three-minute film which brings scale and drama to the race itself – leaning into the excitement of the sport through the drivers’ ‘by any means necessary’ mentality.
‘No Turning Back’ is an intense, powerful and unapologetic view on the sport – bringing the adrenaline and proposition of the races to the forefront – showing how it was designed to race not only on the track but through iconic global cities. It can be viewed at: www.fiaformulae.com/noturningback
The film opens in the middle of a race – Sam Bird, António Félix Da Costa and Pascal Wehrlein fight for lead position. As the excitement builds at 280km/h, the world watches with anticipation, the tension and power of the vehicles clear for all to see.
The crowd roars as Da Costa makes his move, but then he connects with Wehrlein’s car, flips upside down and flies across the track in a crash, hitting the concrete in a blur of impact and white noise pounding through the screen.
In this moment of dramatic collision, the film cleverly juxtaposes live news reports of climate change and its impact with the chaos of the cars crashing – further landing the idea that there’s no turning back for the drivers or the planet. The UK’s Formula E commentator Jack Nicholls provides commentary throughout the film channeling the adrenaline and drama of a real race.
Just when you think the drivers can’t carry on after an accident of this magnitude, we see Da Costa crawl from beneath the wreckage of his car, to climb the track fence and move this race to the streets. The other drivers join as they don’t want to accept defeat, they keep going on their relentless will to win, letting nothing stand in their way.
We follow our protagonists through cities hosting Season 8 E-Prix including New York City, Seoul, Monaco and London. Throughout this feature-like film, we move back and forth between the city streets and race track, in a high voltage raucous ride to the finish line.
Our drivers that escape the crash, arrive at a neon-lit alleyway, they trample through the darkness jostling with each other to try and regain ground. Da Costa spots a short cut, he bursts through a door where he’s confronted by a rearing police horse, the officer loses his grip momentarily and falls backwards onto the ground – Da Costa uses this opportunity to mount the horse to charge off through the smoke and lights of New York City, leaving behind Bird of Jaguar TCS Racing to gain the lead.
We now move inside and see our remaining racers causing havoc through the kitchen of a Korean restaurant, jumping over the counter, plates smash and diners are startled as the drivers speed through the dining room. They exit the restaurant dramatically smashing through an ornamental dragon-etched glass partition door.
As our drivers scale the stairs to the rooftops in a James Bond-like manner, we arrive in Monaco interrupting an alluring and extravagant affair – Wehrlein bustles through the decadently dressed party goers, knocking champagne flutes across the dance floor en route. Emerging onto a regal staircase in a grand hall, a scuffle breaks out as security try to stop the Tag Heuer Porsche Formula E Team driver in his tracks. 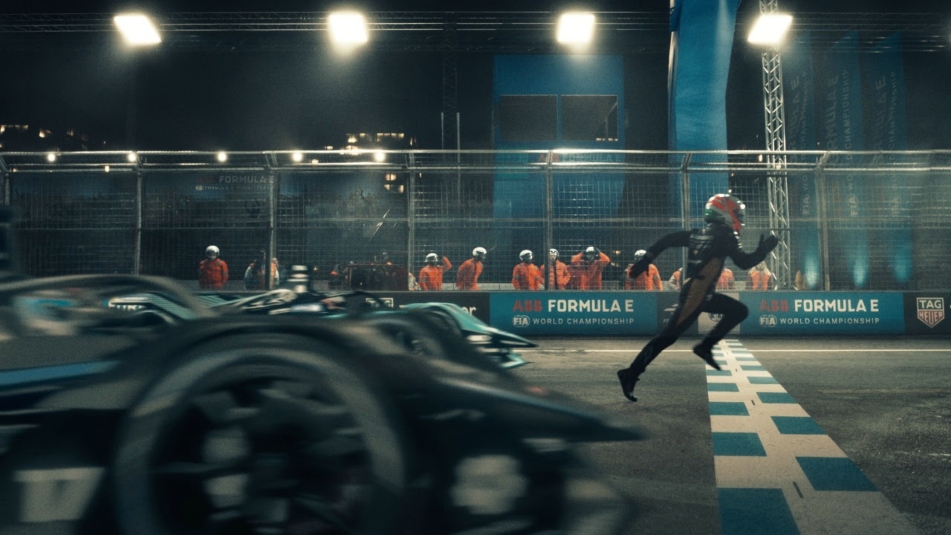 Meanwhile, Da Costa continues his race through a London theatre, where a performance of Julius Caesar is taking place. He finds his way backstage, where the film eerily pauses in a moment of stillness, the DS Techeetah driver is confronted by a chorus of intimidating characters. As he slowly walks past them, we hear biblical music and a quote in the distance from Marc Anthony, a Roman general under Julius Caesar, from the performance on stage.
Finally Da Costa makes it back to the asphalt of the race track to be confronted by the rest of the Formula E cars tearing towards him – there’s no turning back now – he turns and sprints to the finish line – who will win? A race for the chequered flag, neck and neck.
The film was directed by Sam Walker through Pulse Films, pulling off the ambitious production in four days. Each cinematic scene posed its own challenges with rearing horses, tracking vehicles, stunts, fight scenes, choreographing large numbers of extras, and huge scale art direction.
The racing scenes were created using cutting-edge ‘Unreal’ CGI program – a technology used across the best video games. The exact details of the track and cars were meticulously recreated using precise reference from real Formula E races. A large portion of the track, finish line and crash site, complete with full-size crashed car, were then created in real life on location to match the race footage. The film is also set to a specially created driving Drum n Bass score.
Henry Chilcott, Chief Marketing Officer, Formula E, said:
“Building on last year’s Change.Accelerated. campaign and Formula E’s positive vision for the future, this year’s campaign pulls focus on our racing. In essence it’s a film rooted in the racer mentality – that no matter the odds, you find a way to compete and you never give up. Set against the backdrop of a dramatic and surprising race through iconic global city centres, the film launches our narrative for Season 8 – No Turning Back – and underlines Formula E’s unshakable conviction in its power to accelerate electrification and redefine the future of motorsport for fans around the world.”
James Drummond, Managing Partner, Uncommon, said:
“Formula E embody the future in everything they touch and do. It’s what they represent and where they are destined which gets us excited, as we highlight in our latest campaign. This environmentally charged film shines a light not only on the grit and determination of the exceptional drivers but also on the unpredictability of the races themselves and the important climate issues we can’t turn back from either.”
The campaign launches across TV, cinema, digital and social in the UK, Germany, US and other global markets continuing to air the film throughout the rest of Season 8 in 2022.