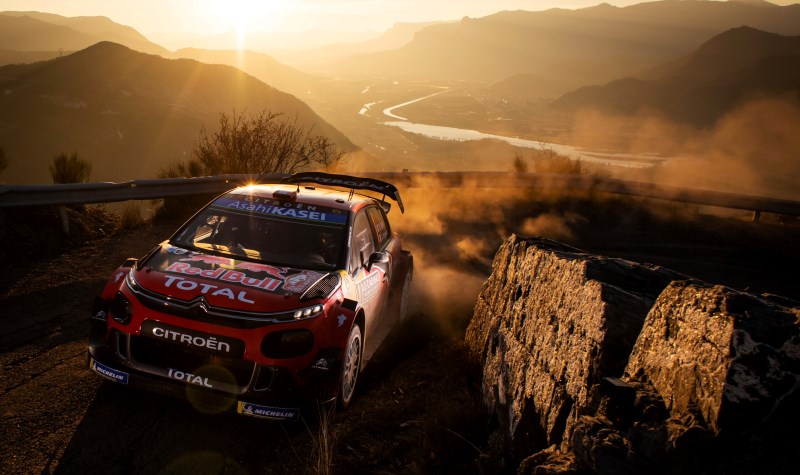 Sébastien Ogier held a slender lead in his quest for a sixth consecutive Rally Monte-Carlo victory after a captivating duel in the French Alps on Friday.

The world champion, driving a Citroën C3 for the first time, ended the second leg of the FIA World Rally Championship’s season opener with a 2.0sec advantage over arch-rival Thierry Neuville.

The two adopted contrasting tyre strategies all day on the mixed condition speed tests, which varied from bone dry asphalt to snow and ice. It ensured as many twists and turns on the leaderboard as the drivers encountered on the corkscrew roads.

The cancellation of the opening special stage dealt a blow to Ogier, whose studded winter tyres would have allowed him to profit on the snow and ice. Neuville capitalised on the next two tests to depose overnight leader Ott Tänak and head Ogier after the opening loop.

The Belgian dropped 20sec following an overshoot in the afternoon’s opener, when conditions suited him, and Ogier built a 14.0sec advantage. But the Hyundai i20 driver retaliated to win the final test and close in.

“Only myself and Thierry are clear in front but in Monte-Carlo things can change quickly,” said Ogier. “It’s important to be on the limit tomorrow but at this rally the limit is safer than elsewhere. I can do a bit more, but in Monte a strategy that is a little more careful can pay off.”

Andreas Mikkelsen headed a trio of drivers battling for the final podium place. The Norwegian, driving another i20, climbed to third in the final test. He held a 7.4sec advantage over Jari-Matti Latvala’s Toyota Yaris, with the returning Sébastien Loeb 0.8sec further back.

Loeb’s brave tyre choices on his i20 debut saw the nine-time world champion bouncing up and down the leaderboard. He won two stages, despite a low start position meaning he had to contend with mud and gravel dragged onto the roads by those ahead.

Elfyn Evans completed the top six in a Ford Fiesta ahead of a frustrated Tänak. The Estonian, who resumed this morning in the lead, fell adrift of Ogier and Neuville before a broken wheel rim cost 2min 20sec.

Esapekka Lappi retired his C3 after breaking the front left wishbone and driveshaft following an impact, while Pontus Tidemand was sidelined with wishbone damage to his Ford Fiesta.