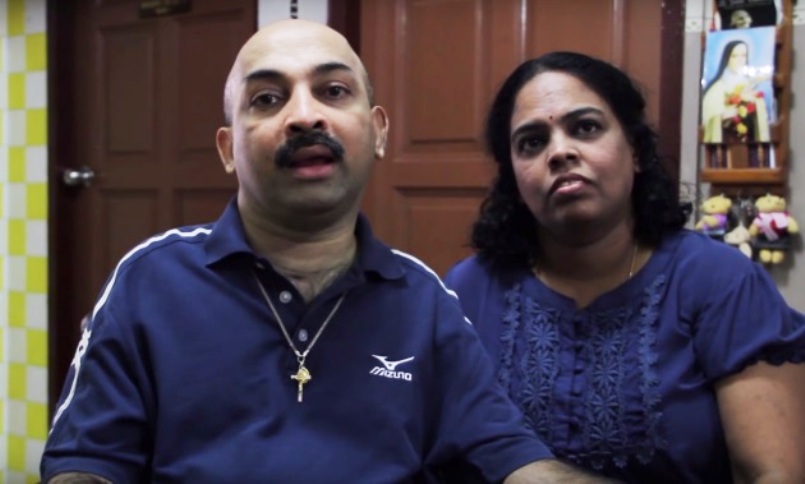 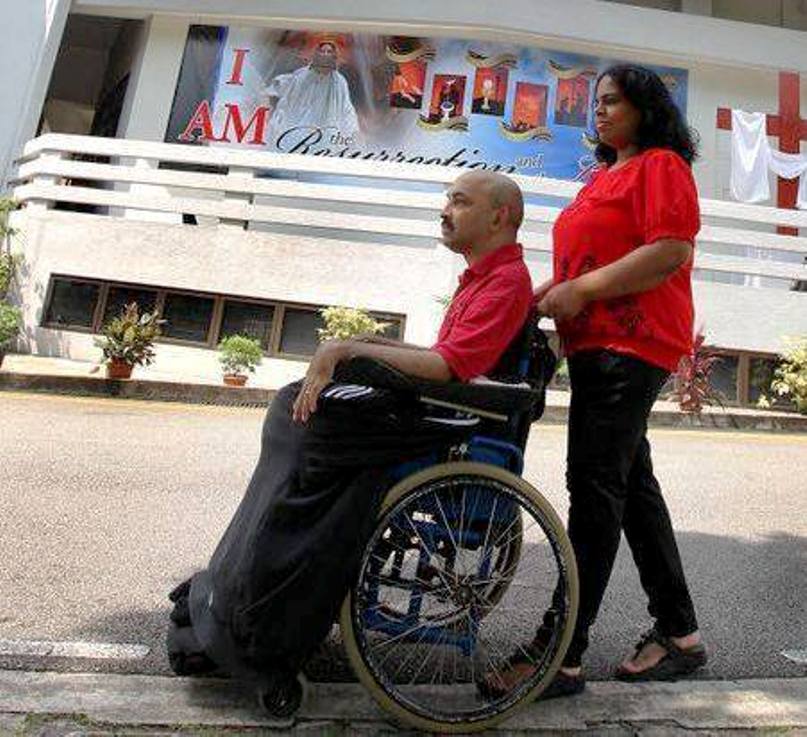 FOR 20 years, he lived a life of frustration, with devoted wife Keralin Mary by his side, as Singapore’s only paralysed international footballer hoped for a miraculous recovery.

The couple prayed every day, walking from their apartment at Block 275 Yishun Street 22 to the Church of Our Lady Star of the Sea and whenever I met them their comforting smiles belied the prolonged agony.

But S. Anthonysamy finally called it a day at 4.45pm Thursday at the Singapore General Hospital after complications from a chest infection. And Keralin was by his side, probably thankful that his painful days are finally over.

Ever since the 1996 freak injury-accident at the Woodlands Stadium in a friendly club international match against Selangor, the Woodlands Wellington professional footballer was unable to move from the neck down.
He had been wheelchair bound since the accident, and unable to seek employment due to his condition. And very admirably, Keralin, resigned from her job as a computer instructor, to care for her husband.

I live a few blocks away from the couple at Yishun Street 22 and I’ve never been amazed how devoted they were, as they endured their hardship, rather silently. Their faces spoke of a disappointed, discomfited and disheartened lifestyle as they depended on a trust fund for financial support, which depleted rather quickly.

But they seldom showed how critical their family plight continued, no grudging or grumbling and always believing as devout Catholics, that a miracle may well come one day.

They sought medical attention and mercy prayers, even in India, never discouraged or allowing for discountenance.

Singapore coach V. Sundramoorthy, one of the closest family friends, who played alongside Anthonysamy for clubs such as Armed Forces, Tampines Rovers, Sembawang, Woodlands and also the national team, said: “I’m devastated by his death. I’ve always been praying for him as Anthony and I played together in the late 1980s as well as in Woodlands Wellington in 1996.”

I vividly recall the fateful day on September 3, 1996, when Anthonysamy was fielded in the last 10 minutes of the Selangor match. And he took just three minutes to lay on the assist for the final goal in a 4-1 win.

But two minutes later, the unimaginable happened. In one of the freakiest clashes I’ve ever seen, Anthonysamy was floored after challenging for the ball with Selangor striker Mubin Mokhtar, who landed with his full weight on him.

Few realised the intensity of the unintentional clash as Anthonysamy was stretchered off and rushed to hospital. And, the next day, doctors broke the worst news that two vertebrae near the neck were fractured. He has been paralysed from the neck down ever since.

Despite the tragic accident, Anthonysamy married Keralin two months later while he was still warded at the Ang Mo Kio Community Hospital. An ex-computer instructor, Keralin, then quit her job to become a full-time caregiver to her husband.

“He never allowed his paralysis to get him down, and he always stayed positive after accepting his life-long condition,” said former Singapore defender Bernard Nobert, one of the closest family friends.  “He will be very much missed but I know he is in a better place now.”

Nobert described the 1.62m Lions footballer, who was noted for his speedy runs along the flanks, as a “bubbly figure on and off the field of play”.

“His team-mates looked up to Anthony when he was playing for Wellington FC in the National Football League, and then with Woodlands Wellington in the S.League,” he said. “He was always very jovial, and he was always lifting the mood of the dressing room with his singing.”

Since 2012, S-League Hougang United raised more than $100,000 for Anthonysamy. “He is from the pioneer batch of Singapore football. Many people may have forgotten about him, but we will always remember his contributions,” said Hougang United honorary treasurer Jeffrey Sim.

In the end, after 241 months, Anthony probably put a final stop to his much prolonged agony.

Jollilads FC chairman Ravi Krishnan, who visited Anthony a few hours before his death, said: “I was relieved that his suffering was finally over. It was terrible, but I was reassured. He was starting to get breathless and he couldn’t sit down.

“We are trying to move forward, sometimes it is hard, we get stuck in our own tears and longing, but as a close family friend, I’ve moved forward, knowing that he is in a more peaceful place.”

Rest in peace, Anthonysamy, you will always be remembered as a sportsman and a gentleman. And an unfortunate paralysed footballer who never failed to believe in miracles.