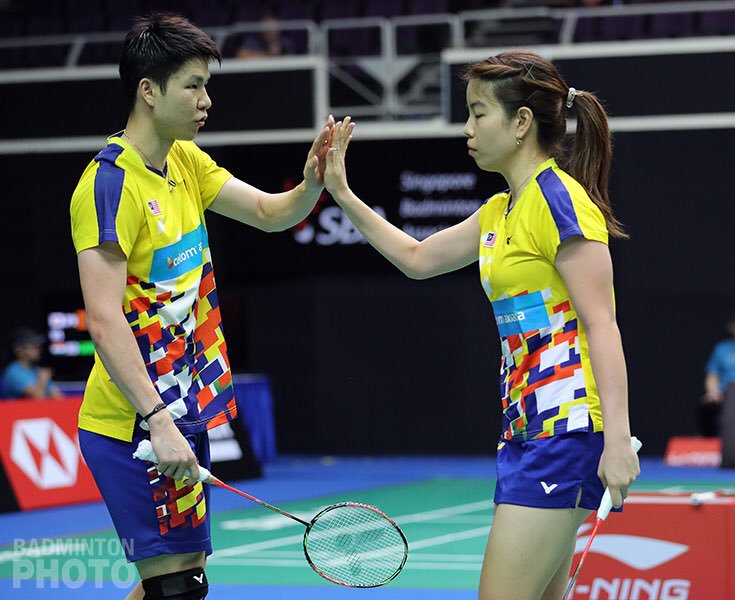 Newly crowned Thailand Masters champions Chan Peng Soon-Goh Liu Ying eased into the second round in the USD350,000 Perodua Malaysia Masters mixed doubles at the Axiata Arena in Bukit Jalil on Wednesday.
The Rio Olympics silver medallist smashed their way to a straight games 21-13, 21-14 win over French pair Thom Gicquel-Delphine Delrue of 36 minutes to advance to the second round.
Playing in only their second tournament after quitting the national team at the beginning of this month, Peng Soon-Liu Ying, will face China’s Lu Kai-Chen Lu on Thursday for a place in the quarter-finals.
“It was a ‘get the feel’ of the tournament match for us. It was a warm up for us since we knew our opponents’ strength. Thirdly, it is good to be in the winning mode after winning the Thailand Masters,” said Liu Ying after the match.
Earlier on Tuesday, in a late first round match another mixed doubles pair Goh Soon Huat-Shevon Lai Jemie also cleared their first hurdle with a hard fought 23-21, 21-14 win over Chang Tak Ching-Ng Wing Yung of Hong Kong China.
They will meet Japan’s Takuro Hoki-Wakana Nagahara next. The Japanese pair downed Indonesian youngsters Rinov Rivaldy-Pitha Haningtyas Mentari 21-9, 19-21, 21-17.
However, two other mixed doubles pairs – Tan Kian Meng-Lai Pei Jing and Chen Tang Jie-Peck Yen Wei were first round victims.
Kian Meng-Pei Jing battled for 56 minutes but could not stop the fourth seeds, English husband and wife team of Chris Adcock-Gabrielle from clinching a 20-22, 21-11, 21-15 win.
Tang Jie-Yen Wei were derailed 18-21, 12-21 by Japan’s Yuki Kaneko-Misaki Matsutomo in 28 minutes.
Malaysia also had mixed fortunes in the first round women’s doubles. Vivian Hoo-Yap Cheng Wen moved into the second round but toiled for 66 minutes before prevailing 12-21, 21-12, 21-18 over Thailand’s Chayanit Chaladcham-Phataimas.
Another Malaysian pair, Chow Mei Kuan-Lee Meng Yean gave a below par performance and crashed to a 8-21, 14-21 defeat to Japan’s Ayako Sakuramoto -Yukiko Takahata. – BY RIZAL ABDULLAH
- Advertisement -