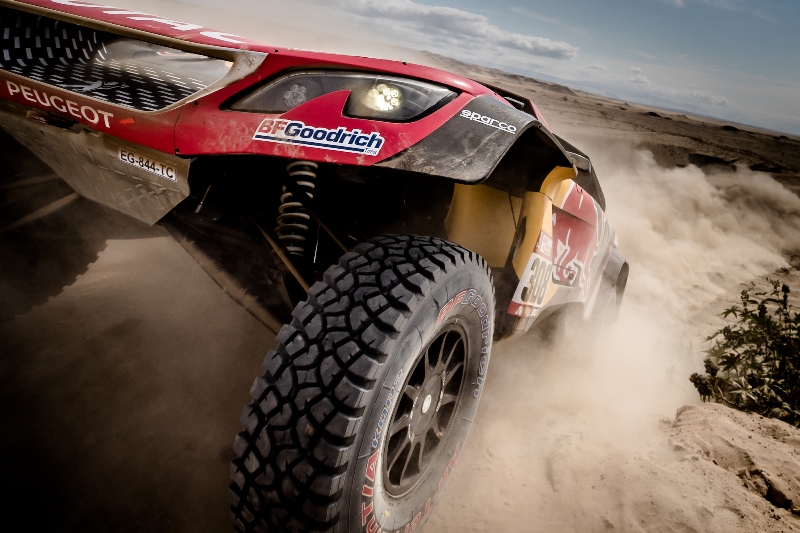 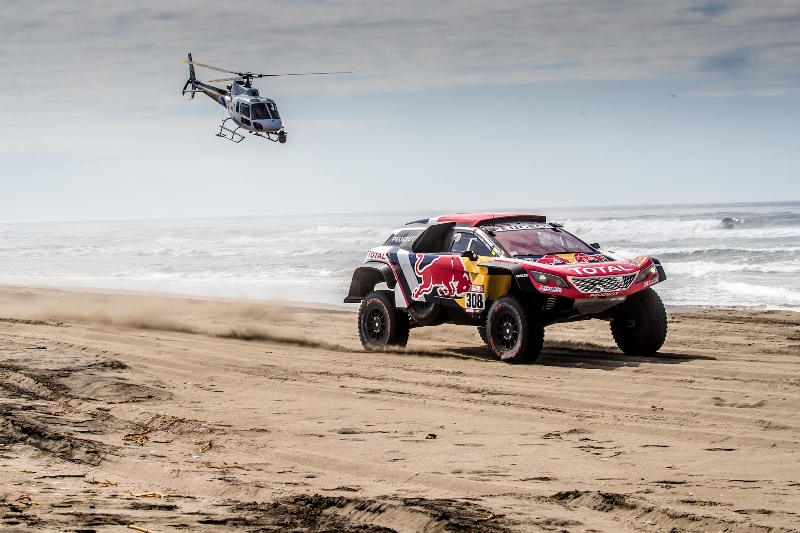 It’s now a PEUGEOT one-two-three at the front of the Dakar Rally, but the event bit hard for Cyril Despres and David Castera, who hit a rock and severely damaged the right-rear of their 3008DKR Maxi. For the rest of the team, it was another strong day with PEUGEOT occupying the top three places both on the stage and overall.

“It was fun today: a long stage with plenty of dunes and quite a special start side by side along the beach. The terrain was tricky: the important thing was not to get stuck and I think a few people lost a bit of time in this stage. But luckily, we got through and won the stage. The incredible thing is that it was only by a minute, so we’re all still very close together and it’s really tight. Tomorrow we’ll be first on the road and the navigation will be tricky, so it will be important to stick near our team mates.”

“It was a tricky start to the day as we got stuck immediately. We lost seven or eight minutes but then we caught up with Nasser Al-Attiyah and got a puncture that we had to stop and change. Afterwards we were able to carry on and we had no further problems. As always on the Dakar, you have to be vigilant but at least end result was good for us today.”

“First and foremost, I’m disappointed for my friend Cyril. For my part, it was quite stressful at the beginning as we started the stage side by side: it’s never easy when it’s like that! But we were in the lead by the time we got to the first canyon and that was good because then everyone else had to cope with the dust, rather than us. After that it was good, apart from one time when the tyre came off the rim, in the middle of the dunes and we lost time changing it because there was sand in the jack. Finally, we thought we had missed a way point, together with Carlos, and we went back to try and find it. Annoyingly, we were actually right the first time. So not a perfect stage, but we’re here and at the front.”

Stopped in the stage

“I’m really not sure exactly what happened. We approached gently, braked, and went over a rock that somehow kicked up and ripped off the right-rear of the car, with a lot of damage. It can be fixed, but not until late at night. We’ll have to wait for the truck. What happened is hard to compute because it’s such a slow place: not the sort of thing you would normally look out for.”

Sébastien Loeb and Daniel Elena, the winners of nine consecutive titles in the World Rally Championship, both started their careers with Peugeot. Loeb’s very first rally was in 1997 at the wheel of a Peugeot 106 Rallye, with which he contested the Volant Peugeot one-make formula. Elena started his motorsport career as a driver, also driving a Peugeot 106 Rallye on Rallye Monte-Carlo in 1997 and 1998.

The longest stage of the rally (at more than 900 km) is composed of two stages in parallel. The cars will first take on sector B (67 km) and then follow the motorcycles into sector A (200 km). This stage could be the biggest challenge of this first week. The competitors will drive for the first time through the mythical Tanaca beach, where they will have to face mountainous dunes for about thirty kilometres. The link that will bring them back to Arequipa will be the longest of the rally (508 km).