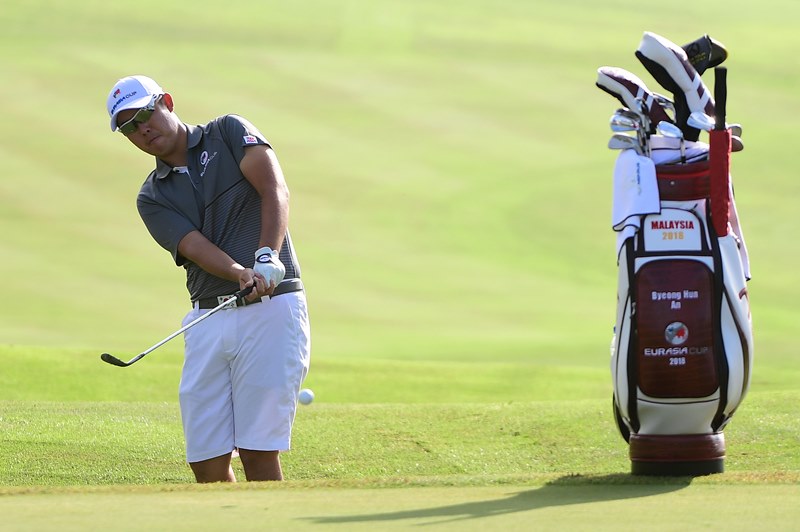 Korea’s Byeonghun An is ready to renew his rivalry with Team Europe when the epic battle at the EurAsia Cup presented by DRB-HICOM begins on Friday.

An was part of Team Asia who lost to Team Europe at the last EurAsia Cup in 2016.

The Korean, who is ranked 100th on the Official World Golf Ranking, however believes the team can make up for that 18 ½ – 5 ½ loss and claim what would be a popular victory at the Glenmarie Golf and Country Club.

Thailand’s Poom Saksansin will be making his debut at the team match-play event and will be adopting a similar mental approach which has seen him lift two Asian Tour titles.

The 24-year-old, who qualified for the EurAsia Cup through his Order of Merit position where he finished in eighth place last year, believes a relaxed approach will be key to doing well.

I’m glad to be back. Although we lost the last time we had a lot of fun.  I’m looking forward to it again as we have some really good and young players playing this time. I’m sure we can do better than last time and I’m just going to do my job and not worry about the others because I know they will do well.  I just want my points. We all play for one goal and that’s to win. My goal is simple and that is to get my points.  All the guys probably want to do that as well and I’m not worried because I know they are good players.  Hopefully I do my part.  That’s all I can do. I have to play well and then see what happens. It was my full on season on the PGA Tour last year and it was definitely not easy. It was tough seeing the best 125 players in the world playing against me but I did manage to achieve a couple of my goals. I think this event is a great start for 2018 and that’s why I’m here. I’m starting here and playing the next two weeks in Dubai and Abu Dhabi.

I’m really excited to be able to play in my first EurAsia Cup. We have a great team and I hope I can play my part in helping the Team win. Of course, it’s important to have fun too. My short game is my biggest asset and I hope to use that to my advantage. I always tell myself to enjoy myself when I play golf and the result will take care of itself.