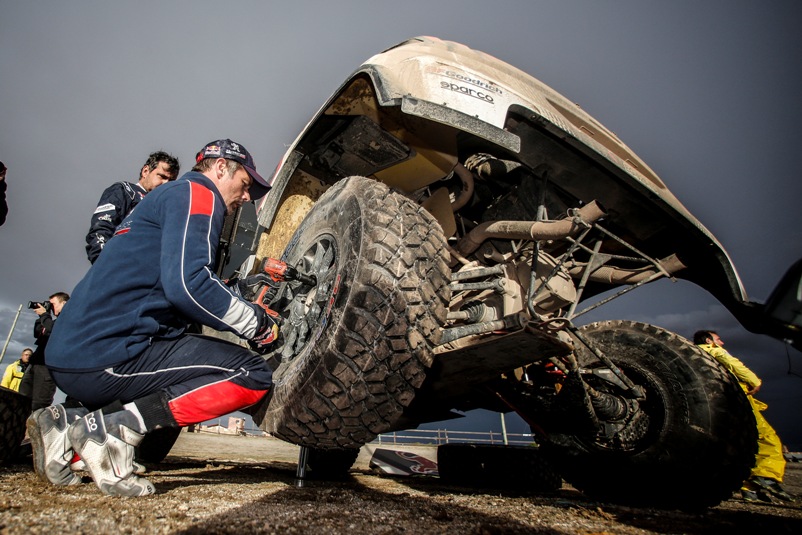 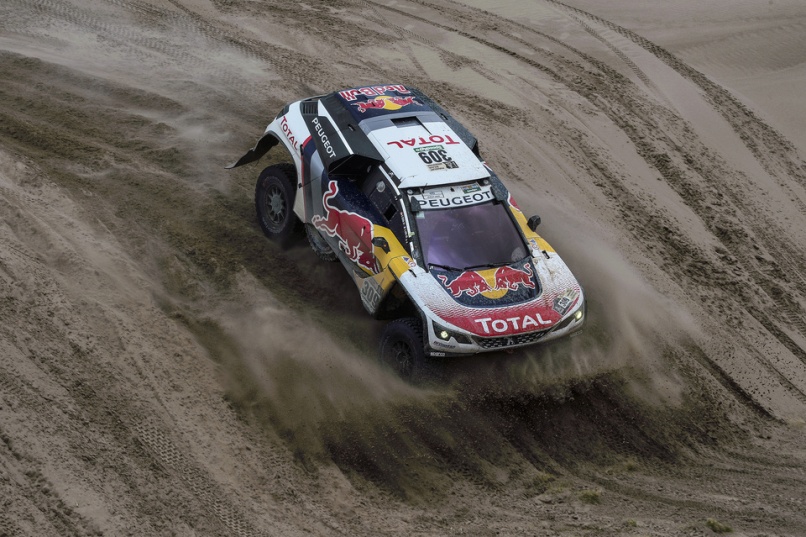 PEUGEOT 3008DKR crews PETERHANSEL / COTTRET and LOEB / ELENA overcame further difficult conditions on Stage 7 this Monday, to secure the fastest and second-fastest times on the first section of the 2017 Dakar Rally’s marathon stage; they keep their positions as leaders in the provisional overall rankings.

Week 2 of the 2017 Dakar Rally kicked off with a huge challenge in the form of the first part of the event’s only marathon stage, with no overnight servicing permitted during tonight’s bivouac in Uyuni.

In total, crews face the prospect of covering 1, 693km on Legs 7 and 8 combined without the possibility of any outside servicing. As a result of the poor weather that has swept across the La Paz region in Bolivia recently, Leg 7’s competitive section was shortened from the originally planned 332 kilometres to 161km.

PETERHANSEL / COTTRET collected their second stage victory of this year’s Dakar, 48 seconds clear of LOEB / ELENA who ran first on the road on Monday. DESPRES / CASTERA fell back to fourth overall behind Nani Roma after conceding some nine minutes to the day’s victors.

Reliability is always the name of the game on the Dakar’s marathon stages and the three PEUGEOT 3008DKRs completed today’s distance without suffering any major technical problems. The drives and co-drivers will make a standard quick check-up, following a process they already experienced during training sessions.

WEATHER: 5°C, and hailstones encountered on the second road section.

Stéphane PETERHANSEL (PEUGEOT 3008DKR #300)Leg 7: 1st / Overall: 1st“It wasn’t easy but it was a nice stage, with lots of navigation. There was some soft sand in places, but no really big dunes. Because of the high altitudes, we were down on power but we had the advantage of being able to follow the tracks made by Sébastien and Nani. On top of that we didn’t make any mistakes. This is our second stage win and what’s in the bank is in the bank. We’ll see how it all pans out later. Tomorrow [Tuesday], we will be first on the road which won’t necessarily play in our favour. Before then, we’ve got a check list to work through to make sure that everything is okay with the car in the absence of the mechanics. One of our jobs is to swap the front and rear wheels.”

Sébastien LOEB (PEUGEOT 3008DKR #309)Leg 7: 2nd / Overall: 2nd“The navigation through the dunes was difficult to begin with and some of the waypoints were hard to find but we did a decent job. We never got lost and, whenever we did, we soon found our way back on to it quickly. It turned out to be a good day for us. I don’t know how the others fared but nobody overtook us, so that’s a positive. It was the sort of stage where Stéphane tends to go well, so we can’t complain.”
Cyril DESPRES (PEUGEOT 3008DKR #307)Leg 7: 7th / Overall: 4th“We dropped a little time despite not having any major issues, with the exception perhaps of an error when we strayed off route during an off-road portion. We had to drive 11km through tall grass. Seb and Stéphane both went very well today. We lost a bit of the rear bodywork while driving through some thick camel grass. Okay, it wasn’t a great day, but I have no intention of letting that get me down.”
CLASSIFICATION – LEG 7:
1. PETERHANSEL Stéphane (FR) / COTTRET J-P. (FR), PEUGEOT 3008DKR, 1h54m8s
2. LOEB Sébastien (FR) / ELENA Daniel (MON), PEUGEOT 3008DKR, +48s
3. DE VILLIERS Giniel (ZAF) / VON ZITZEWITZ Dirk (ZAF), Toyota Hi-Lux, +3m33s
4. HIRVONEN Mikko (FIN) / PERIN Michel (FR), MINI, +5m3s
5. ROMA Nani (SP) / HARO BRAVO Alex (SP), TOYOTA, +5m32s
7. DESPRES Cyril (FR) / David CASTERA (FR), PEUGEOT 3008DKR, +9m7s