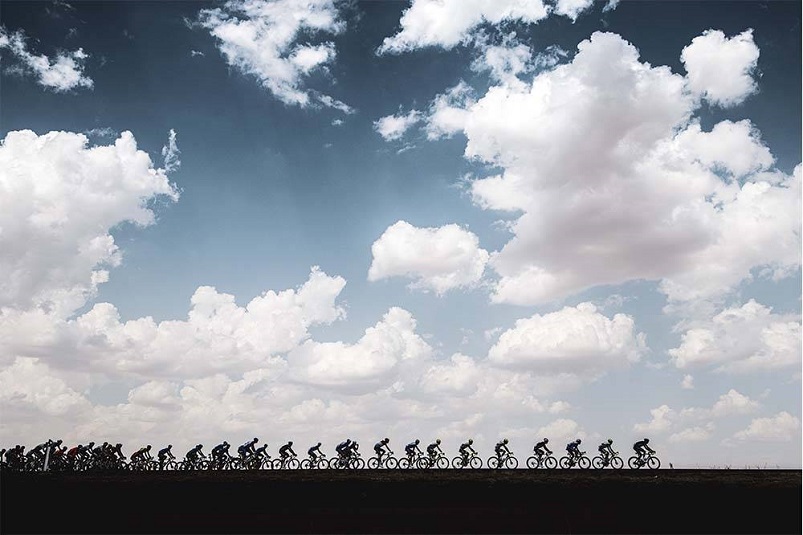 Already a winner on stage 2, Jasper Philipsen (Alpecin-Fenix) was the fastest again on day 5, powering to another success in Albacete after 184.4km of racing through the wind. The Belgian sprinter edged Fabio Jakobsen (Deceuninck-Quick Step) and Alberto Dainese (Team DSM) on the line.

Involved in a crash with 8km to go, Rein Taaramäe (Intermarché-Wanty-Gobert Matériaux) lost La Roja to Kenny Elissonde (Trek-Segafredo), who only has a 5’’ lead on Primoz Roglic (Jumbo-Visma) ahead of stage 6’s summit finish at Alto de la Montaña de Cullera.

There are still 182 riders in the race as the peloton roll from Tarancon in the early afternoon and head for Albacete on wind-exposed roads. Three attackers go on the move as early as km 0 to make the break of the day: Pelayo Sanchez (Burgos-BH), Oier Lazkano (Caja Rural-Seguros RGA) and Xabier Mikel Azparren (Euskaltel-Euskadi). Their lead quickly rises to 3’50’’ at km 7.

Rein Taaramäe’s Intermarché-Wanty-Gobert Matériaux set the pace in the bunch until the gap hits a maximum of 7 minutes with 120km to go. Jasper Philipsen’s Alpecin-Fenix are the first to react. Fabio Jakobsen’s Deceuninck-Quick Step and Arnaud Démare’s Groupama-FDJ quickly emulate them and the gap quickly drops to 3 minutes.

The attackers are caught one by one

The peloton trail by 2 minutes as they enter the last 50km. GC teams move to the front positions as they are wary of potential echelons due to crosswinds.

Two riders remain at the front as Pelayo Sanchez is dropped by his breakaway companions with 34km to go. Oier Lazkano eventually pushes alone with 21km as Xabier Mikel Azparren can’t follow anymore. The peloton eventually reels the last man at the front with 15km to go.

The crash and the sprint

A massive crash in the front positions splits the bunch with 8km to go. Taaramäe is among the main riders caught behind while Romain Bardet (Team DSM) hit the deck and stayed down for some time before resuming racing.

Alpecin-Fenix take the reins of the bunch in the final kilometres and Jasper Philipsen delivers the victory, his second in La Vuelta 21, ahead of Fabio Jakobsen and Alberto Dainese (Team DSM). Rein Taaramäe loses 2’21’’ on the line. Kenny Elissonde (Trek-Segafredo) is thus the new overall leader of La Vuelta with minimal gaps on the eve of another summit finish at Alto de la Montaña de Cullera. – www.lavuelta.es