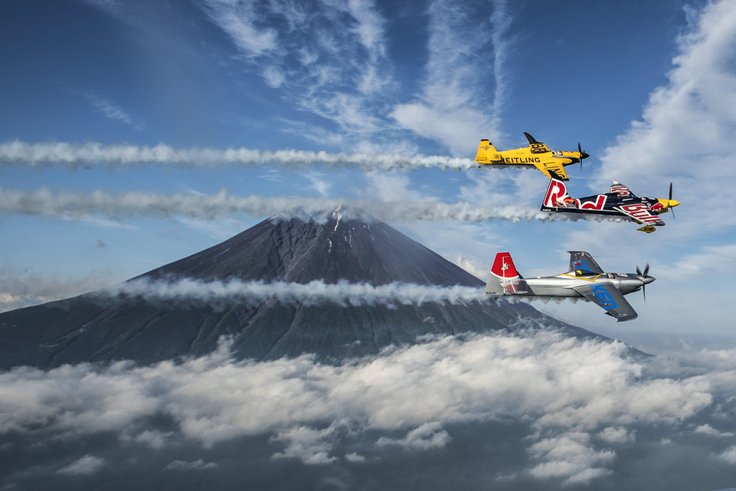 With anticipation at an all-time high for the return of the Red Bull Air Race to Chiba on the weekend, the man of the hour – Japan’s own Yoshihide Muroya – led fellow pilots Nigel Lamb (UK) and Martin Šonka (CZE) on an exhilarating flight over iconic Mount Fuji.

With its stunningly symmetrical volcanic cone, Japan’s Mount Fuji may just be the most recognized mountain in the world, but on Wednesday, three Red Bull Air Race pilots –  Nigel Lamb of Great Britain, Martin Šonka of the Czech Republic and home hero Yoshihide “Yoshi” Muroya – got a breathtakingly fresh perspective of the iconic peak. Ahead of the second-ever Red Bull Air Race World Championship stop in Chiba this weekend, Muroya led his peers on a reconnaissance flight to take in the iconic snow-capped summit from their raceplanes.

Designated as a Special Place of Scenic Beauty, “Fuji-san” is Japan’s highest mountain at 3,776 meters (12,389 feet) in height, and it’s also an active volcano; a potent symbol of the race to come this weekend. At the third stop of the eight-race season, fourteen pilots who have climbed to the pinnacle of their elite motorsport will explode into dramatic action in the attempt to gain precious World Championship points.

Last year, a sold-out crowd of 120,000 filled Makuhari Beach on race weekend to see their favorite Muroya in high-speed, low-altitude action at home for the first time, and he set the speed record for a run the Chiba track, even though he didn’t win the race.

This year he intends to use that fan motivation to go all the way to the top of the podium for the first time in his career. He’ll have a fierce fight from the other standouts in the lineup, such as Šonka and Lamb as well as the three pilots currently heading the overall standings: Matthias Dolderer of Germany, Nicolas Ivanoff of France and Hannes Arch of Austria.

Tickets for the six remaining stops of the 2016 Red Bull Air Race World Championship – including Yoshihide Muroya’s home race in Chiba – are on sale now.