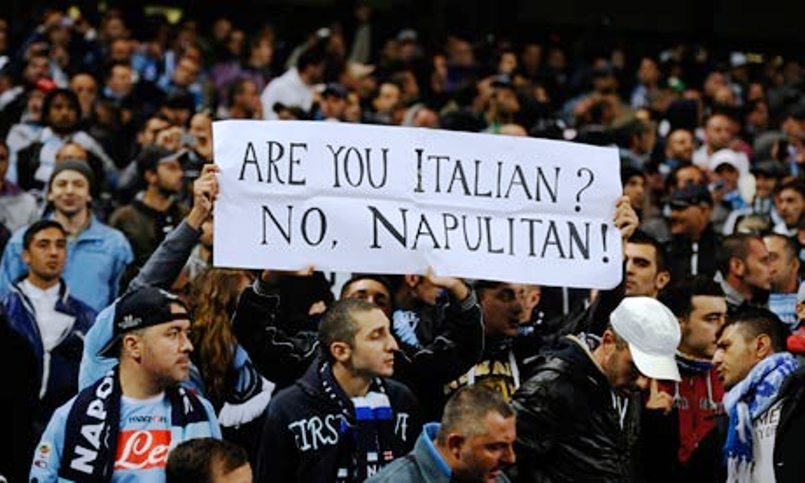 Desperate Napoli fans have signed up as official Real Madrid supporters in a bid to attend a Champions League clash that will see an estimated 10,000 Neapolitans descend on the Spanish capital Wednesday.

Napoli, last season’s runners-up, are nine points behind Juventus in the Serie A title race but, with a league-topping 57 goals in 24 games, are playing arguably the best football in Italy.

The southerners’ first appearance in the last 16 of the competition since losing to Chelsea in 2012 has fans in a frenzy.

And Naples’ mayor, Luigi De Magistris, is whipping it up.

“I know the mayor of Madrid well… but we have to give them a nasty surprise on Wednesday,” De Magistris said in a video post on YouTube.

“Spain is a great country, but Naples is better and we have to go there looking to win.”

Along with Juventus, Napoli are supported by fans throughout the peninsula due to mass migration from the south during the post-war years to more industrial parts of Italy.

And fans are going to extreme measures to reach the Spanish capital.

Allocated only 3,917 tickets for the Santiago Bernabeu stadium, an estimated six thousand more Napoli fans want a piece of the action.

They have chartered planes, taken indirect flights via Istanbul, Zurich and Brussels and hired minibuses, according to widespread reports.

Most will be without a ticket, but gazzetta.it said: “Some have secured a ticket thanks to a Real Madrid-supporting friend or season-ticket holder while others have spent a fortune for a place in the executive boxes.

“But a lot more spent the 30 euros it costs, payable via internet, to become an official Madrid supporter (Madridista) in a bid to their hands on a coveted ticket.”

Some families are travelling via ferry from Civitavecchia to Barcelona then on to Madrid via train, on Monday. Seven other fans will embark on a 40-hour round trip over 4400 kilometres in a minibus.

But the statistics suggest disappointment awaits.

Napoli and Real have met only once in the competition, in 1987 when it was still the European Champions Clubs’ Cup. After a 1-1 draw in Naples, Real won the second leg of their first round tie 2-0 to advance.

And the 11-times European champions are unbeaten in 11 consecutive Champions League games.

But Napoli midfielder Jose Callejon, along with teammate Raul Albiol a former Real player who came through the club’s youth system, says it’s time Napoli bared their teeth in Europe.

“It will be special to return to the Bernabeu, it’s my home and I will always show my gratitude to the fans,” Callejon told La Sexta.

“We’re on the ascendancy, and we have a lot of young players. We want to take a step up and become one of Europe’s big sides.”

An upset of Zinedine Zidane’s giants on Wednesday would set Napoli up well for the second leg at the San Paolo, added Callejon: “The San Paolo is incredible, it’s our twelfth man.”

But again, the odds are against Maurizio Sarri’s men, who have a far poorer record in European competition compared to a ‘Galacticos’ side starring Cristiano Ronaldo.

Napoli have won two and lost four of their six away matches against Spanish opponents in Europe, and won none of their last four against La Liga sides.

In his time with Juventus, former France international Zidane never lost in six meetings with Napoli, scoring twice against the Azzurri.

Madrid have won eight of their 12 fixtures since drawing with Dortmund on matchday six.

Since then, they lifted the FIFA Club World Cup and set a Spanish record of 40 games unbeaten in all competitions which was ended by a 2-1 defeat at Sevilla last month. – Agence France-Presse