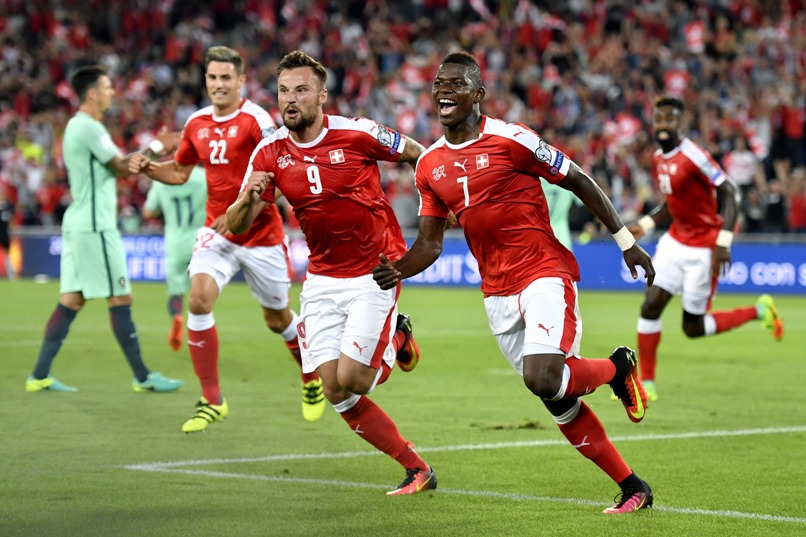 With Cristiano Ronaldo still missing due to injury, European champions Portugal began their bid to qualify for the 2018 World Cup in Russia with a disappointing 2-0 defeat in Switzerland on Tuesday.

Goals seven minutes apart in the first half from teenage sensation Breel Embolo and Admir Mehmedi gave the Swiss the points at the St Jakob-Park in Basel as they got off to the ideal start in qualifying Group B.

Elsewhere on Tuesday, Euro 2016 runners-up France also showed signs of a hangover from their summer exertions as Les Bleus were held to a 0-0 draw in Belarus in Group A, while the Netherlands came from behind to draw 1-1 in Sweden.

In Nicosia, former Everton boss Roberto Martinez’s first competitive match as coach of Belgium ended in a 3-0 win against Cyprus.

Ronaldo was one of three Portuguese players to have started the 1-0 extra-time triumph against France on July 10 who was absent from the away starting line-up in Basel, with Renato Sanches also sidelined and Joao Mario only on the bench.

Joao Moutinho and Bernardo Silva came in along with Lille striker Eder, the man who came off the bench to score the winning goal at the Stade de France.

But Fernando Santos’ side were undone as Switzerland went in front midway through the first half, Schalke striker Embolo heading home the loose ball after Rui Patricio had only managed to parry a Ricardo Rodriguez free-kick.

The Swiss doubled their lead on the half-hour mark when Haris Seferovic cut the ball back for Mehmedi, who took a touch and finished high into the net.

With FIFA president Gianni Infantino watching on, any hopes Portugal had of turning the game around were effectively ended when the unmarked Nani headed against the post from six yards following a Ricardo Quaresma cross.

“The Swiss were totally dominated in the first 20 minutes, but from the moment they scored they used the tactic that Portugal have often used and defended well,” said Santos.

“I’m sure that when we start winning that will lead to more wins. I’m convinced we will be in Russia for the World Cup.”

In the same section, Hungary were held to a 0-0 draw in the Faroe Islands while Valerijs Sabala’s second-half goal gave Latvia a 1-0 victory in Andorra.

France have had problems against Belarus in the recent past, including taking just one point against the former Soviet Republic in Euro 2012 qualifying.

Paul Pogba, the world’s most expensive player, started for the visitors in Borisov, but coach Didier Deschamps made six changes compared to the side that lost the European Championship final, leaving Dimitri Payet on the bench.

With Les Bleus lacking attacking inspiration, though, Payet came on for Anthony Martial just before the hour mark and moments later his corner was headed against the bar by Olivier Giroud.

Antoine Griezmann then met a low ball in to the near post by Moussa Sissoko but was thwarted by Andrei Gorbunov.

The Belarus goalkeeper came up with another decisive intervention in the 73rd minute, saving a Layvin Kurzawa header from a Payet free-kick, with Manchester United’s Pogba just unable to get to the follow-up.

In the same group, the Netherlands began their attempt to bounce back from their failure to qualify for Euro 2016 by facing the Swedes at the Friends Arena.

It is the beginning of a new era for Sweden, with Zlatan Ibrahimovic now retired from international football and Janne Andersson having replaced Erik Hamren as coach.

They went in front two minutes before half-time when Kevin Strootman was caught in possession just outside the Dutch box and Marcus Berg, who used to play in Holland for Groningen and PSV Eindhoven, beat Jeroen Zoet with a superb chip from 20 yards.

However, Wesley Sneijder followed in to convert the rebound and make it 1-1 midway through the second half after Robin Olsen had saved from Daryl Janmaat.

Also in Group A, Bulgaria beat Luxembourg 4-3 in a frantic finish in Sofia, with Aleksandar Tonev netting a stoppage-time winner.

Martinez’s Belgium got off to a fine start against Cyprus in Group H with Romelu Lukaku scoring a brace and Yannick Carrasco also on target.

In the same group, Bosnia and Herzegovina trounced Estonia 5-0 with veteran defender Emir Spahic scoring twice, while Greece won 4-1 against Gibraltar in the minnows’ first ever World Cup match. Liam Walker scored to briefly have Gibraltar level in the first half in Faro, Portugal. – Agence France-Presse