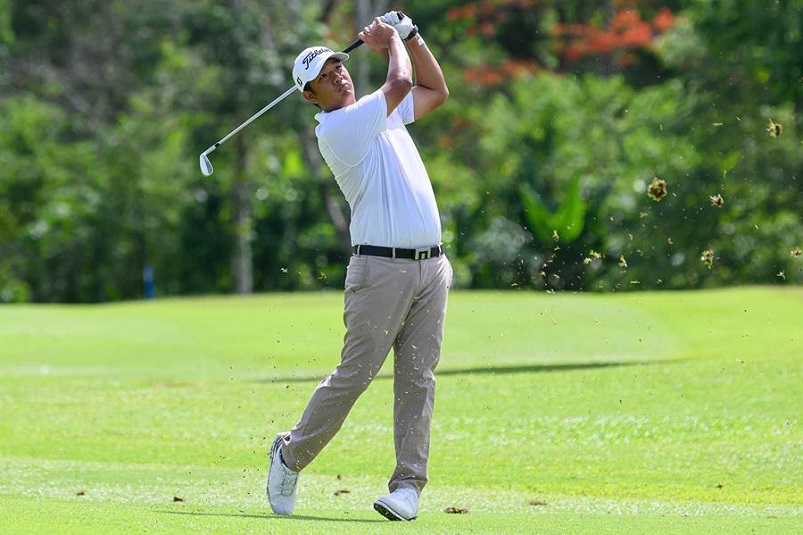 Settee Prakongvech would love to win around the globe but wouldn’t mind either if every tournament he teed it up in was at Blue Canyon Country Club.

The 27-year-old continued his love affair with the Phuket course’s fabled Canyon layout when he captured his maiden Asian Development Tour (ADT) title on Friday in a classic snatch and grab job after jetting in from the Asian Tour.

Starting the final round of the $75,000 Blue Canyon Open three shots back, Prakongvech made the most of his own hot front nine and the misfortune of others coming home to win the 54-hole event, co-sanctioned by the MENA Tour, by a stroke.

It comes after the world No. 385 won the second of his thus far three All Thailand Golf Tour (ATGT) titles, the Singha All Thailand Championship, on the Canyon course last September.

This was Prakongvech’s sole appearance in the four-tournament BTS but victory comes as little surprise given he is currently third on the ATGT Order of Merit (OOM) and has been focusing his talents on the Asian Tour with his country exemption status.

He flew into Phuket fresh from a T-19 finish at the 41st GS Caltex Maekyung Open in Seoul and before that a career-best third-place finish at the DGC Open in India.

“I have win here before at Blue Canyon, I love the course and today I played very well on the first nine,” said Prakongvech who negotiated the Canyon course’s outward half in four-under before mixing a birdie on 16 with a bogey on the next to play the inward nine in even par.

It turns out Prakongvech got all the help he needed from the two groups ahead of him.

First tall Thai Vanchai Luangnitikul, the overnight co-leader with Kemmer, imploded with a triple-bogey six after ditching his tee shot on the par-3 14th in the water.

MENA Tour player and ADT affiliate Joshua Grenville-Wood was making a serious title charge in the penultimate group, arriving at the penultimate hole at five-under for the day and in the lead at -13 overall. But the young Englishman sadly found water to the right of the par-3 17th, settled for a double from the drop zone and then dropped another stroke on the last to sign for a 70 and a hard-to-accept share of seventh place.

Kemmer, who won the ADT’s season-opening Gurugram Open in India, had his putter to thank for hanging tough until the last hole when he ditched his drive into bushes hugging the left-hand side of the fairway on the par-4. The 34-year-old from south of San Francisco got a free drop from the GUR but came up short with his approach, pitched past the hole with this third and couldn’t muster one final piece of magic from his blade just when he needed it most.

“I am surprised, I didn’t expect for win,” Prakongvech said afterwards.

“I thought if I played my best I could finish top-five and not even when I finished I didn’t think I could win the tournament so it is a surprise.”

Thailand’s Chanat Sakulpolphaisan ($13,059), Malaysia’s Shahriffuddin Ariffin ($10,237) and Thai teen Denwit Boriboonsub ($10,131) occupy the other spots in the top seven that will earn automatic Asian Tour promotion at the end of the season set to feature a run of six events in Indonesia announced on Friday.

Englishman Tom Sloman, who won the BTS’s opening Laguna Phuket Challenge, clinched the MENA Tour’s 2020+ Journey to Jordan OOM despite missing the cut in the Blue Canyon Open, along with second-placed David Langley.

Countryman David Hague had a chance to snatch the title with a top-four finish on Friday but struggled with his putter and had to settle for a 17th place. The $879.38 Hague won meant he moved up to $26,053 for the season and remained third overall behind Sloman ($28,870) and Langley ($27,557).

Sloman earns a start in one of the Asian Tour’s upcoming International Series events for his victory while the top-10 in the final J2J OOM earn invites to the next two ADT events (the June 7-10 OB Golf Invitational at Damai Indah Golf BSD and the June 15-18 Indo Masters Golf Invitational presented by TNE at Imperial Klub Golf), plus exemption to the final stage of the 2023 Asian Tour Q-School.