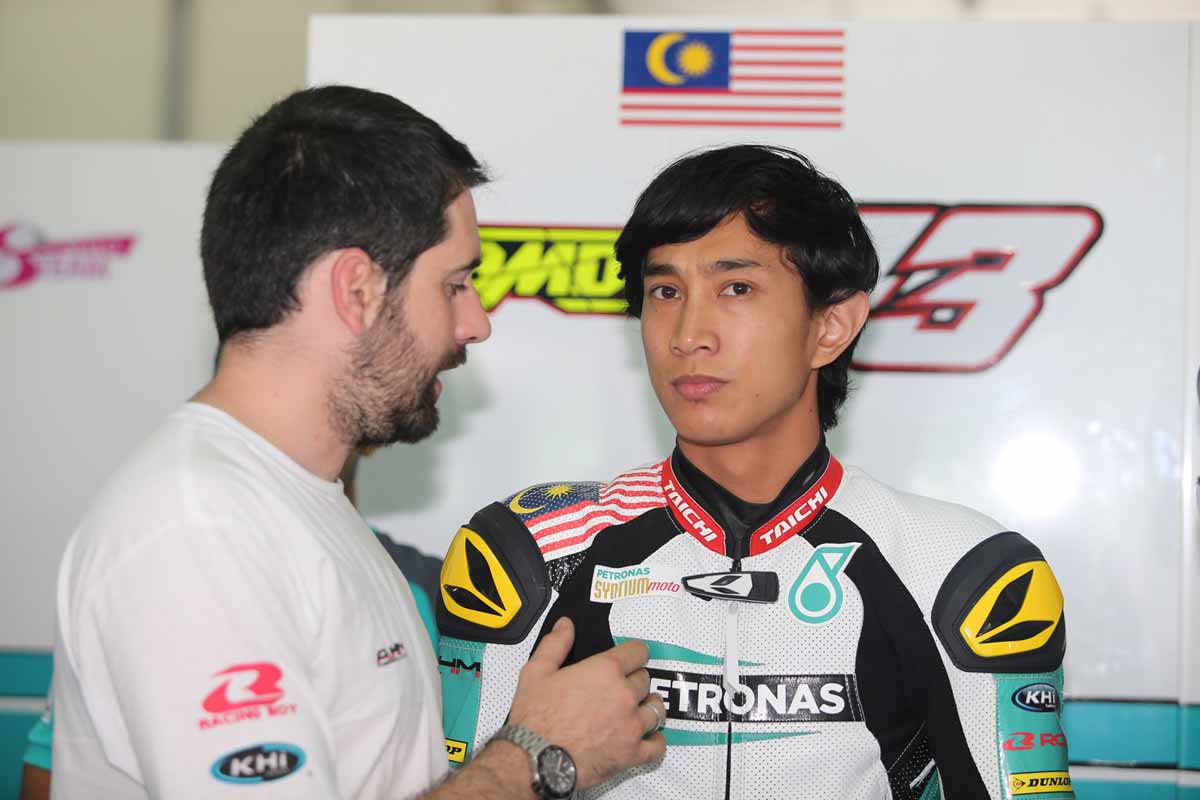 PETRONAS has announced that its’ Talent Development rider, Ramdan Rosli will make a wildcard appearance in Round 7 of the FIM Motorcycle World Championship (MotoGP) at the Catalan Grand Prix this 5th June. The 20-year old is set to line up on the Moto2 grid alongside fellow PETRONAS Talent Development partner, Hafizh Syahrin (PETRONAS Raceline Malaysia) and compete against regulars such as reigning world champion, Johaan Zarco, Sam Lowes, Alex Rins, Alex Marquez and Lorenzo Baldassari among many.

This would be Ramdan’s third Moto2 entry as he previously contested at the Catalan and Malaysian Grand Prix last year while he made his debut in the Moto3 class at Sepang in 2014.

Although delighted, Ramdan is well aware of the challenges ahead and remains confident he can put in a solid performance, improve on his best result at Catalunya (26th) and make significant progress in his burgeoning career.

More importantly, the announcement serves as motivation for him to step up his game in the Moto2 European Championship that will host Round 2 at Motorland Aragon, Spain this weekend, provided his crew is able to set up a competitive bike and the weather remains favourable. He is currently ranked 14th overall with five points following the opening round in Valencia last month.

Meanwhile Russia’s Steven Odendaal leads the chart with 45 points ahead of Alan Trecher and Federico Fulligni with 36 points and 29 points respectively.

Ramdan was first discovered by team manager Kenny Chua as a 12 year old with vast potential. Throughout the years, he has grabbed multiple titles in the PETRONAS AAM Malaysian Cub Prix Championship and made waves at the regional Asia Road Racing Championship before moving to the Spanish National Championship (CEV Repsol) in 2014.

Ramdan Rosli, PETRONAS AHM Malaysia Moto2 rider
Firstly, thank you to PETRONAS and the team for securing the wildcard slot and giving me the opportunity to show my potential in MotoGP again! Personally, I did not do too well during my first wildcard appearance last season because it was my rookie year in Moto2 but this time it will be different as I have a year’s worth of experience. It will still be an uphill task no doubt, seeing I am up against the best riders, including Hafizh, but the team has set a target for me to finish the race with the top-20. That’s quite realistic. Additionally, this motivates me to do better in the Moto2 European Championship. I will make full use of the upcoming race in Aragon as a preparation ground ahead of the Catalan GP.

Kenny Chua, PETRONAS AHM Malaysia Team Manager
We are delighted to have Ramdan compete on the world stage again at the Catalan GP! These wildcard appearances are extremely hard to come by so we hope Ramdan capitalizes on this opportunity to gain more exposure and utilize the new-found knowledge to further advance his racing career. The aim is to have him to finish in the top-20 and we have every reason to believe he is capable of achieving it.