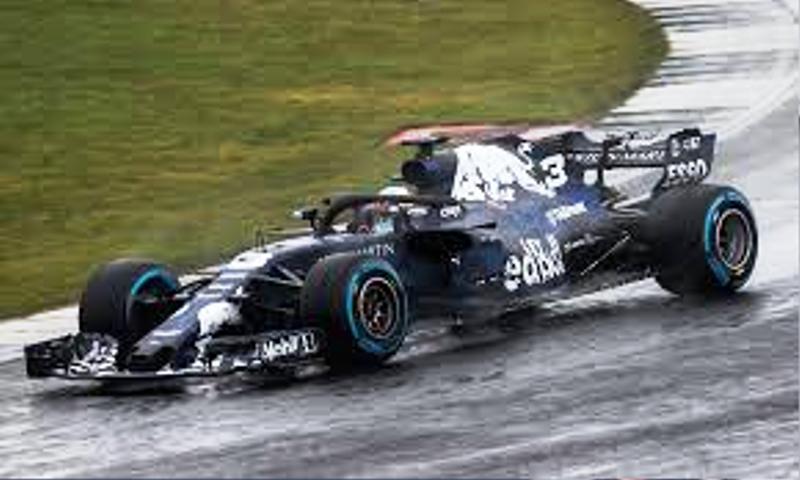 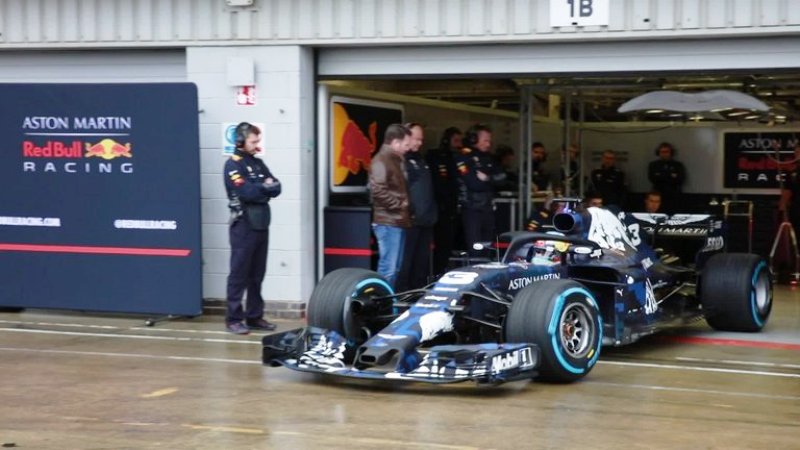 The RB14 made its on-track debut at the Aston Martin Red Bull Racing filming day at Silverstone yesterday. Daniel Ricciardo took the honours behind the wheel, completing a number of laps in damp conditions.
Following his day in the RB14 Daniel commented “It’s always exciting to drive the car for the first time. It sounds a bit different, obviously looks a bit different – actually it looks cool. It’s cold, it’s pretty miserable today at Silverstone but it’s nice to be out there. First cobwebs shaken out and I’m ready to go to Melbourne.
“It’s hard to tell from a couple of laps but the initial feeling in the car is good. I can already feel that the rear feels pretty settled, even in these poor conditions. Those are encouraging early signs. So far I can see fine with the halo. I’d only done a couple of installs with it before so it was pretty new today but I really didn’t notice it was there, which is pretty good. Honestly, unless there’s stuff above, I don’t see any issues at all on a flat track.
“It’s been a long day, trying to get everything going and complete the filming – but a lot better to have that here than in Barcelona.”
Max was also in town to see the RB14 take to the track for the first time, commenting: “I think the car looks very aggressive and, actually, the livery I really, really like. It’s always better to drive the car of course, and I can’t wait to drive the RB14 in Barcelona. I’m really looking forward to it and hopefully it will be dry.”
Aston Martin Red Bull Racing Team Principal Christian Horner was pleased to see the RB14 turn a wheel for the first time, saying: “The special edition livery has made its mark on the 2018 season. Knowing we were running all of our development and processes earlier to meet this early launch, we felt that ‘shift’ had to be reflected in the livery, hence the ‘digital disruption’ you saw on the RB14 at Silverstone. It was good to have got the first few laps of 2018 under our belts and now we look forward to the first test in Barcelona next week.”
A news cut of the RB14 on track is now available to view and download on the Aston Martin Red Bull Racing Content Pool via the following link: https://www.redbullcontentpool.com/C-RBRACING/AP-1URNKK66D1W11