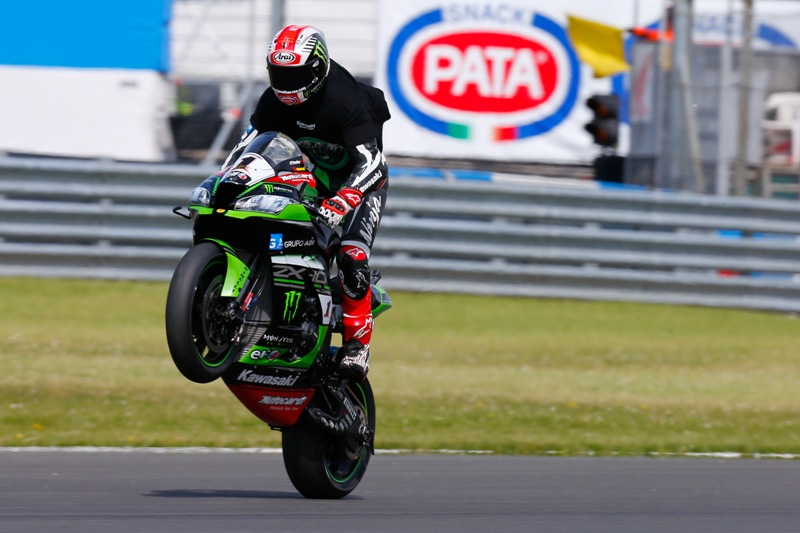 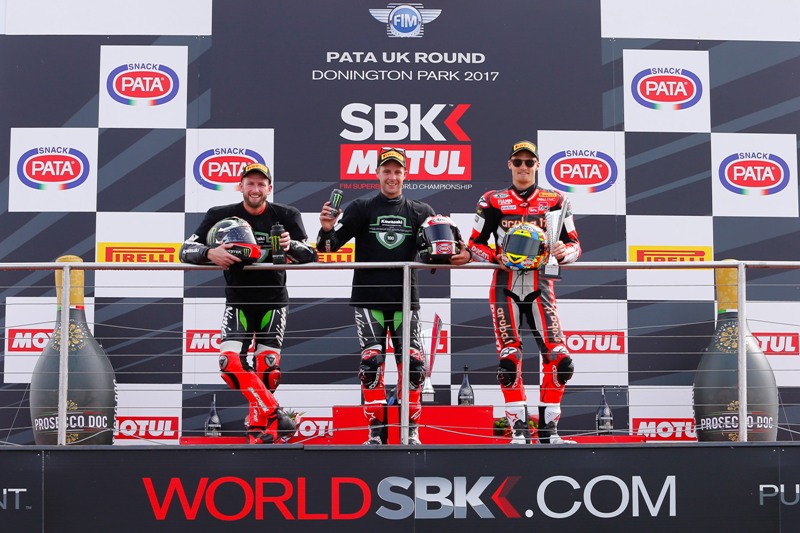 The PATA UK Round concluded on Sunday afternoon with a dramatic Race 2, which brought victory for World Champion Jonathan Rea (Kawasaki Racing Team) after a crash on Saturday, with Rea’s KRT colleague Tom Sykes and Aruba.it Racing – Ducati’s Chaz Davies also on the podium.

Rea’s eighth victory of 2017 extends his lead in the standings to 55 points after six rounds and he rode brilliantly at the Donington Park Circuit to beat his teammate to the line by 1.601s and win his home race.

The result brought an end to Sykes’ remarkable run of nine successive wins at Donington and the Yorkshireman was amongst the first to congratulate Rea on his triumph. It was also Kawasaki’s 100th race win in WorldSBK.

In parc ferme after the race Rea dedicated his win to the late Nicky Hayden who so sadly passed away earlier in the week after a cycling accident in Italy.

Michael van der Mark (Pata Yamaha Official WorldSBK Team) had looked good for a podium result but was caught for third in the final stages by a determined Davies – who had crashed and finished eighth on Saturday.

Meanwhile, Marco Melandri (Aruba.it Racing – Ducati) stopped on the eighth lap after the chain of his Ducati Panigale R broke and fell loose.

The WorldSBK grid will be back in action at the Pirelli Riviera Di Rimini Round at Misano over the 16th-18th June weekend.

P1 – Jonathan Rea (Kawasaki Racing Team)
“It means a lot to me, we had to bounce bike and overnight the guys worked so hard. I knew I could win today but coming from 10th so so difficult and I guess thats what happens when I push really. I want to deadicate this race win to Nicky Hayden, the world is a worse place without him.”

P2 – Tom Sykes (Kawasaki Racing Team)
“All good things come to an end in life but I’m happy. Today I lost a fair fight, unfortunaelt I had a bad start, my position wasn’t good in ninth and I got boxed in. Rea took some closing down, but I had an exciteable and enjoyable race. The character of the bike was in the ball park, and today I was beaten fair.”

P3 – Chaz Davies (Aruba.it Racing – Ducati)
“I think the podium is the big bonus here from the home race, it was a really tough race.  It wasn’t easy, I had to make it through a fair bit and I used up a lot of tyre. I’m really happy to be here and I want to dedicate this podium to the family of Nicky Hayden.”