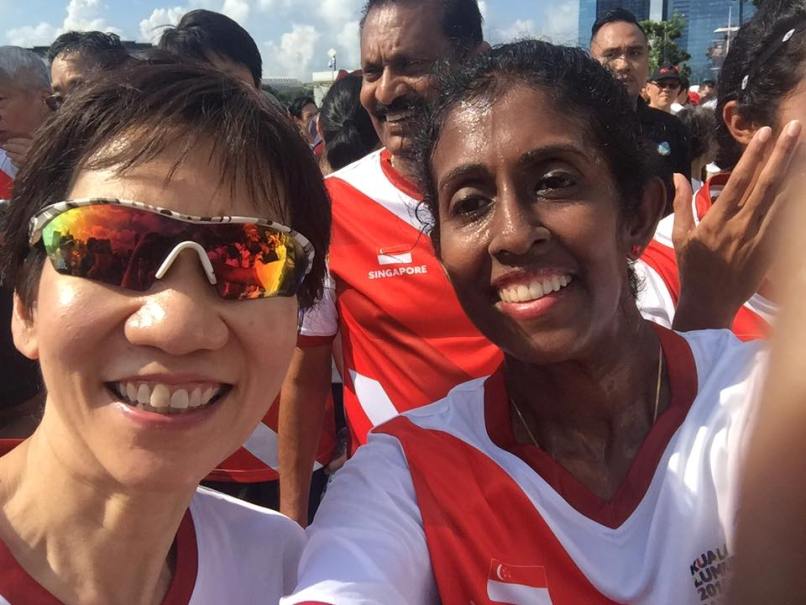 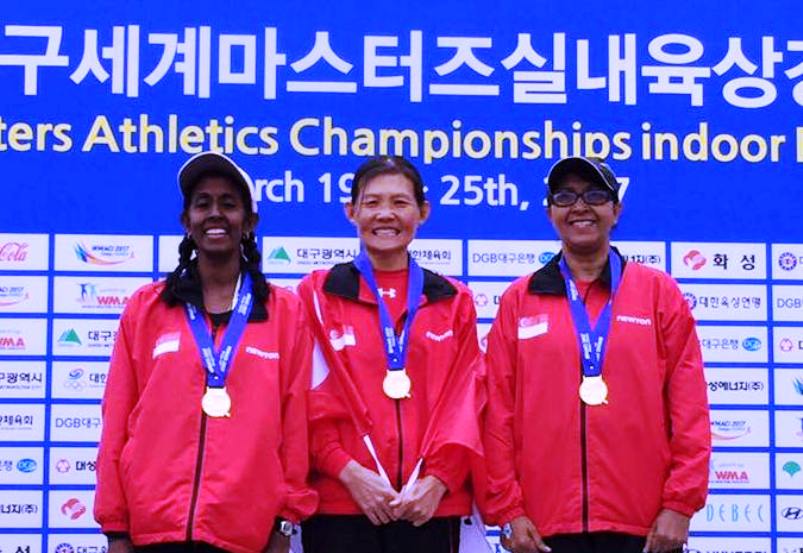 IF 56-year-old schoolteacher Komathi Jayaraman could turn the clock back, she would’ve started race-walking at 14 years and not 40!

Genuinely an honest confession from a senior citizen, who over 16 years at serious international competition, has proved a value-add inspiration to show the sporting fire in the belly.

Just last year, when majority her age would well be preparing for retirement, with a walking stick at hand, she took a crack at the World Masters Athletics Championship in Perth, Australia, in the 10km and 20 km race-walking events.

“I went there with no expectation to win,” says the mother of three teenagers. “I wanted to do my personal best and to gain some exposure in this world-class competition.”

She came off, in her words, with flying colours, as she clocked a personal best of 2hr 20 mins in the 20 km, finishing eighth in her age category.

And what a shot in the arm, it turned out to be. She adds: “That gave me the confidence and motivation to participate in the World Masters Athletics Championship Indoor in Daegu, South Korea in March 2017, where, rather amazingly, I clinched a bronze medal in the individual 3,000m race-walking event and a gold medal in the 10,000m team event.

Wow, it just blew her heart and mind as “Majullah Singapura” was played during the prize-giving ceremony. “I was close to tears and it was a moment of great pride and satisfaction in my life, for bringing glory to our nation through sports and I truly felt a great sense of achievement,” she says.

“Never had I dreamt that this race walking journey that I took after I turned 40 would bring me this far!”

A self-confessed belated starter on the international athletics’ stage, Komathi, a senior teacher for 32 years, now as Head (Aesthetics) at Woodlands Primary School, feels fortunate to have a sports-fanatic husband, Jayaraman Thirumalai, and three sports-active teenage lads: Darshananth, 29, Logesh, 28, and Didiyanthi, 22, who were national middle distance athletes during their school days.

She describes her 16-year race-walking journey so far like the proverbial blood, sweat and tears.

“Yes, as you get older, your feel your bones creaking but I was determined to deliver and it was filled with hard work and perseverance,” she says. “Over the past 16 years, I have taken part in various local, Asean and international events.”

She recollects that the first major event she donned the red-white Singapore jersey was the International 24 hour Race Walking Championship in 2007 in Kuala Lumpur, the quartet won a bronze medal. Incredibly, she walked 100km in 24 hours!

“That distance was something I never imagined I could conquer. I moved on to participate and have achieved podium finishes in various international 12-hour walks since then and I have also participated in three Asian Master Athletics Championships and clinched silver in all three of them,” she says proudly.

“In Singapore, I have participated in most full marathons. I race walked along with marathon runners  finishing in decent time I’m often teased by fellow runners who wonder how I can walk faster than some of their running pace!”

Komathi admits that she always sets two goals when she goes for competitive races: Finish the race in good time. Be better than the last.

She trains five times a week and, for her granny-age, her personal bests are very impressive: For three km (18 mins 45 sec), five km (33 mins) and 10km (65 minutes). She declares: “I’m working hard to bring on bring these timings down even though my age is going up!” 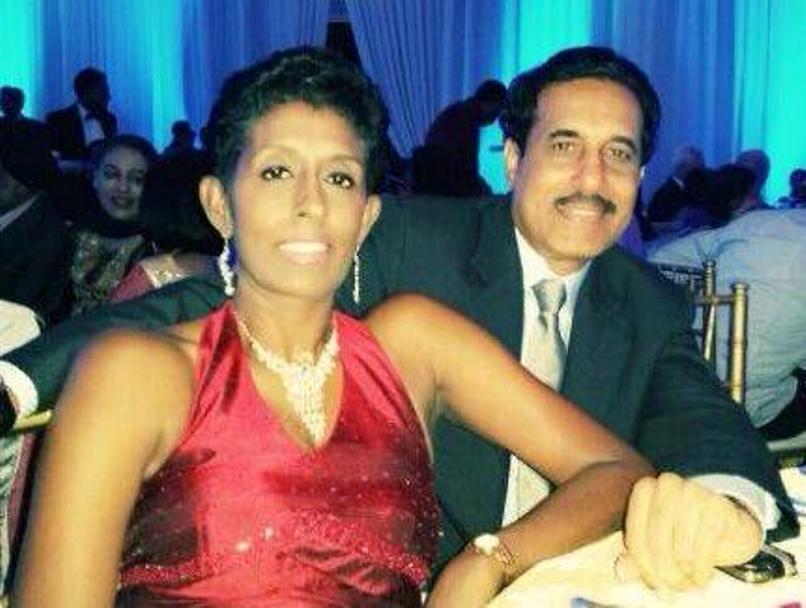 Personal discipline and time management are critical elements in her training lifestyle. She explains: “I race-walk about 5 to15 km each time. Yes, with a tight working schedule as a teacher, as a wife, daughter to my mum and a mother to three boys, it is a marvel how I juggle all these to be ultra-fit at training.

“Call it crazy, but race-walking keeps me going. It is something I look forward to after a hard day’s work. I train with my buddy (Kowsula Kaur, a racewalker).  It is important to have a buddy as we motivate each other to do better and normally share our home and work issues as we pump the road or tracks. It is like washing your stress away as you sweat.”

Komathi got hooked to race-walking only in 2001 at 40 years and progressed well under (coach) Tanabal Ramasamy, a former regional race-walk champion. And under expert coaching guidance, she soon knocked on the South-East Asia (SEA) Games selection list in 2015.

She says: “Unfortunately I could not train as hard as I wanted to and did not qualify. The very fact that I was selected at 55 that year was in itself a remarkable endorsement that if I trained hard I could be ready for the Asian and International races.”

Indeed, there’s a price to pay as a late-competitive bloomer, with a series of injuries taking its toll whenever she pushed herself too hard before major competitions. She recalls: “I have been injured a couple of times, especially when I train too hard before a race. One month before the WMACI 2017, I pulled my hamstring. It was more painful to stop training and rest than the pain itself. I did not fully recover but managed to finish both races and win two medals for Singapore.”

Komathi is a smart cookie and pragmatic of her ageing physical stature: “Yes, it was a matter of mind over body but after the race I realised that I have to listen to my body and fully recover. After the race gave more attention to my body, the food I ate and had enough rest and sleep. Race-walking is definitely not a craze but an avenue to unwind and do what I love to do most next to my children and family.”

To those who want to abandon their walking sticks and get to track shoes to go walking or running, Komathi says “it’s never too late to start or restart wherever you may have left your sports when you were younger”.

She adds: “Age is just a figure. I have never used my age as an excuse to do what I want to do. It is just a number that brings you wisdom and experiences to enrich your life. I have taken part in the Hong Kong MTR Race two years ago under the open category with international world class walkers.

“Some are 30 years my junior and definitely fitter than me. In that race I finished in the last few positions. Yet I was really proud to have walked alongside these great walkers. It was a memorable race and so are all the races that I have taken part in.”

Her future plans as she closes in to the 60-mark? Definitely not buying a walking stick!

She answers, with a big smile: “I have just competed in the 2017 SEA Games trials.  I did not qualify but at least I tried. I plan to continue with my training, better my time and participate in both in the open and master category.

“I hope that my participation in the open category will inspire the young walkers to walk faster than me. When I walk in the stadium, I’m often approached by strangers who ask me to teach them to walk fast and I do not hesitate to share my skills with them.”

What if her legs give way, through wear and tear, I ask her. She confidently replies: “I do not only do walking every day. I’m a qualified yoga instructor and practice it at least once a week. I complement my walking with interval, speed training, aerobics and weight training.

“I do stairs climbing once a week. I climb 34 storeys at least five times. I run five km once or twice a week and do trekking in Bukit Timah once a week for three hours.  I train with my race-walking coach once a week on proper techniques and always do a good dynamic warm up before training  and cool down after training .This way my training is varied and fun.” 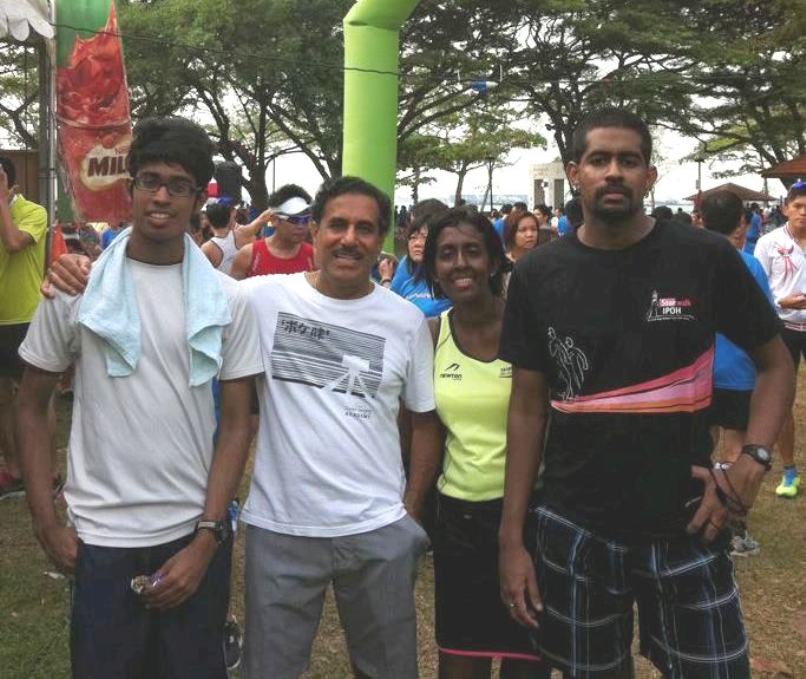 Besides her sports-supportive family, Komathi is grateful to the “Ministry of Education and the principals who have served in Woodlands Primary School”. She explains: “They have always supported my participation in race-walking competitions both local and overseas. I have been granted leave to represent Singapore in overseas events and my principal constantly checks on my training a week or two before the event.”

She recently shared with a group of students her regional sports experience. She says: “They were surprised that I have achieved so much at this age and they were truly impressed. A schoolboy who attended my talk just came up and asked me more about my next race. I was pleasantly surprised when he said: “Mrs Jaya, I want to be like you when I grow up!’.”

Her biggest inspiration comes within the family:  Eldest son Darshananth.

“He used to do middle distance and within a short period he did exceptionally well clocking 15 min 40 sec for 5,000m by the time he was 19 years. All this happened because he gave 101 per cent to sports,” she says.  “Unfortunately due to an eye injury he had to take a break. He still runs but not competitively. But his sense of commitment and love for sports further triggered my interest and fervour for race-walking.”

“He had done some running as a young man, but had given up in his early 20s. After moving to Britain in his mid-80s, he took up running again after a break of about 65 years,” she says. “At age 90 he ran the London Marathon in around 6 hours 20 minutes, the following year improved on his own record by nearly 40 minutes and in 2012, at the age of 101, he completed the London Marathon in 7 hours 49 minutes!

“Whatever age you are when you start training you will show rapid improvement.”

Yes, look no further than golden-ager schoolteacher Komathi Jayaraman, who would have wished she started race-walking at 14 years and not 40! – BY SURESH NAIR