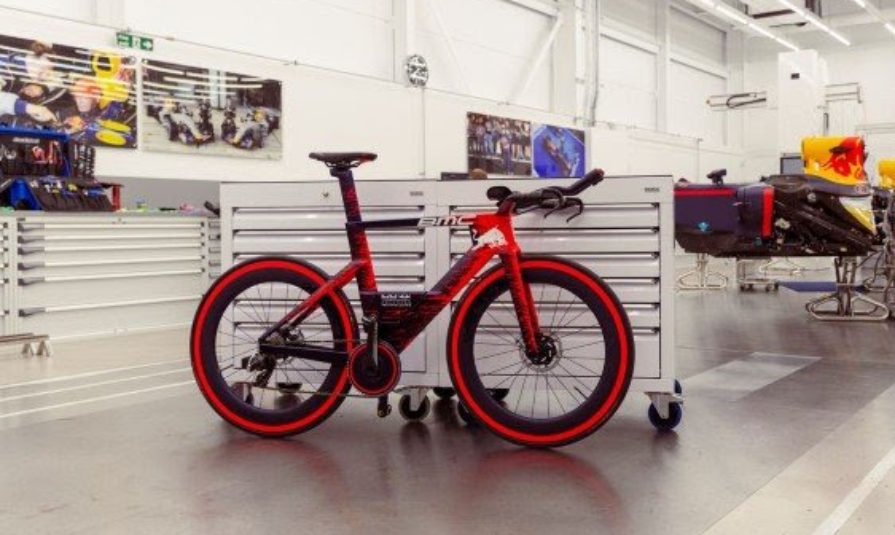 Red Bull Advanced Technology, the high-tech performance division of Red Bull Technology, first entered into partnership with Tour de France winning manufacturer BMC Switzerland in 2018, with the aim of bringing tools developed to boost performance in Formula One to bear and the design and development of high performance bikes.

The project was also aided by human expertise in the shape of Olympic medallist, multiple Tour De France stage winner and BMC ambassador Fabian Cancellara. The time trial legend was involved at every stage of the development, providing invaluable feedback on ride and performance through development and prototyping. The result of the research is an aerodynamic design philosophy that pushes the boundaries of performance in every aspect.

The first test of the project in the heat of battle will come this weekend when it makes its competition debut at the 2021 Ironman World Championship at St George in Utah, ridden by Red Bull Athlete and BMC Pro Triathlon Team member Patrik Nilsson.

Earlier this year, Patrik and Fabian were treated to a first look at the prototype bike at the Red Bull Technology Campus in Milton Keynes, where they met the Red Bull Advanced Technology engineers and aerodynamicists who worked on the programme, and touring the Campus to see how each department had applied Formula One technology to the DNA of BMC’s vision.

The cyclists also had the chance to follow that DNA strand to the source at Silverstone during Oracle Red Bull Racing’s filming day for the RB18, testing the bike on the circuit in between runs of the RB18 undertaken by Formula One World Champion Max Verstappen and team-mate Sergio Perez.

Commenting on the success of the project, Red Bull Advanced Technology Commercial Development Officer, Andy Damerum said: “We started out with the ambition to design the fastest bike in the world. We’re incredibly proud of what we have achieved with BMC, from conceptualisation four years ago, we really sought to push the boundaries and we have done just that. We took our Formula One methodologies in aerodynamics and CFD and applied it to bike design, resulting in a bike that we believe has the potential to be a game changer. We can’t wait to see it make its competition debut this weekend and we’re looking forward to it featuring on podiums in every discipline of road cycling competition in the future.”

David Zurcher, CEO of BMC Switzerland said: “Our mission is to build the fastest bike in the world. The collaboration with Red Bull Advanced Technology started almost four years ago with the clear intention for us to push the boundaries. At BMC we are focused on continually elevating our performance, it really is a never-ending journey to continually develop and ‘Create Speed’. The first results of this ongoing tech collaboration really demonstrate how we have brought together Red Bull Advanced Technology’s impressive simulation capabilities and advanced engineering capabilities to turbo charge BMC’s Research and Development. High performance is in both of our DNA’s, so what is truly amazing is that this prototype really is the first Formula One bike.”

Fabian Cancellara added: “Two worlds from different sports have come together to create something cycling has never seen before. This project has opened up new angles and directions as to how you can build a bike. It has been important to me to have been involved in the project from its early stages to continually test the athlete and machine interface. Being part of the development of a cutting-edge bike employing some radical principles and being influencing its performance from a rider perspective has been amazing. The prototype is incredible and I look forward to what’s next.”