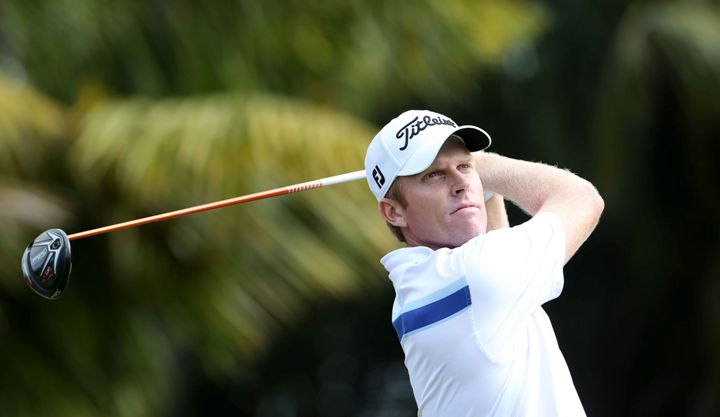 Australian Andrew Dodt battled against the gusty conditions before signing for a two-under-par 70 to lead by three shots over Korea’s Jeunghun Wang at the halfway stage of the AfrAsia Bank Mauritius Open on Friday.

Starting the day with a two-shot advantage, Dodt marked his card with five birdies against a double-bogey and a bogey for an eight-under-par 136 total at the Four Seasons Golf Club Mauritius at Anahita.

Wang signed for a similar 70 to sit in second place while Belgian Nicolas Colsaerts returned with the day’s best score of 65 to share third place with Siddikur Rahman (72) of Bangladesh on 140 at the €1 million (approximately US$1.09 million) event.

“I was just trying to embrace the challenge, enjoy the conditions and have fun out there, rather than trying to hold on and be defensive. You got to be as tough as you can. I didn’t strike the ball as well as I did yesterday, but I missed it in the right areas, where I could still get up and down. That was the key,” said Dodt.

“The chip-in on 12 was a lovely shot. It came out a little harder than I expected but luckily it hit the hole dead center. I lost my concentration on the next hole, though, which sometimes it happens when you make a birdie.

“I’ve actually been struggling a bit to get on my left side through the ball, but this wind is helping me get on the left side, as you have to do that to hit it low. I’ve always been a pretty good wind player, so I feel really comfortable in these conditions,” added the 30-year-old Australian, chasing for a third victory on the Asian Tour.

Wang enjoyed a superb run with birdie-eagle-birdie from the 12 but fell back with dropped shots on 15, third and sixth before recovering briefly with a birdie on seventh.

“The wind was blowing hard and the rain made it even tougher. It was a good round considering the testing conditions. I had a good chip-in eagle on 13. I hit a good second shot but it landed in the bunker. I had to chip out from 20 yards there and I did it. I went on to sink a two-footer for birdie on the next hole,” said the 20-year-old Korean.

Wang, who claimed a career-breakthrough victory in Europe last week, remained positive in his chase for a back-to-back win and a first on the Asian Tour, where he has been plying his trade since 2013.

“If I can continue to play like how I have been playing, I should have a good chance to win again. I think it’s possible. I will keep trying my best and enjoy myself out there. Two wins in a row would be amazing,” added Wang.

Siddikur, chasing an Olympic berth in Rio de Janeiro this August, was delighted to put himself within striking distance after marking his card with two birdies against two bogeys.

“I hit a really good shot on the 17 but unfortunately I didn’t chip well and made a bogey there. But I managed to recover with a birdie on last which is great. I hit my second shot downwind from 250 yards and it went over the green. It was a tough chip from there but I did it.

“Overall, it was a good round. I hung in there and stayed patient. You have to think positively playing in this kind of challenging conditions. I have been hitting the ball well. If I can maintain it till Sunday, I should be able to cap a good result here,” said the 31-year-old.

For more information on the AfrAsia Bank Mauritius Open: http://afrasiabankmauritiusopen.com/

Scores after round 2 of the AfrAsia Bank Mauritius Open being played at the par 72, 7401 Yards Four Seasons GC course (am – denotes amateur):