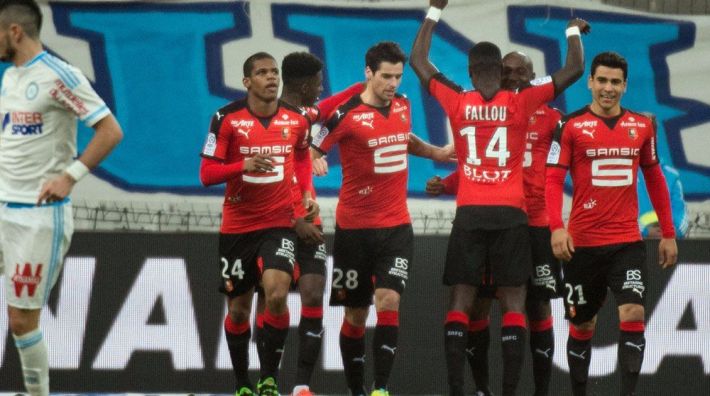 Rennes moved provisionally into third place in Ligue 1 with a stunning 5-2 win at Marseille on Friday that plunged their hosts into full-blown crisis mode.

The visitors were 3-0 up inside 14 minutes at the Stade Velodrome thanks to goals from Yoann Gourcuff, Fallou Diagne and Ousmane Dembele.

Florian Thauvin and Jorge Rolando scored to bring Marseille back into the match but Gourcuff struck again and Giovanni Sio rounded off a remarkable Rennes victory in a tense atmosphere.

The win takes Rennes, who have lost just once in seven matches, into the final Champions League qualifying berth in Ligue 1, a point clear of Nice and two ahead of Lyon before they play later this weekend.

Meanwhile, Marseille continue to stagnate in mid-table and a run of seven league games without a win increases the pressure on Spanish coach Michel.

Marseille ultras had decided to use the first quarter of an hour of the game to protest against the way the club is being run and their team’s miserable record of not having won in 12 home league games since September, the worst such run in their history.

However, by the time 15 minutes were up, their team’s chances of ending that sequence were dead and buried.

Gourcuff opened the scoring when he fired home from a Sio cutback for his first goal since returning for a second spell at Rennes, the club where he began his career — his last goal for the Brittany side had come exactly a decade ago, on March 18, 2006.

Defender Diagne escaped his marker to head home a Kamil Grosicki free-kick before teenage sensation Dembele, one of the hottest properties in European football, saw his shot deflected in to make it 3-0.

At that point, tensions were rising in the stands and Marseille’s Florian Thauvin was struck by a plastic bottle thrown from the crowd as riot police intervened to keep the calm.

The threat of a terrace revolt was eased as Thauvin curled one in to reduce the deficit in the 20th minute, and defender Rolando poked home a second goal for OM early in the second half after Rennes goalkeeper Benoit Costil dropped a corner.

Remy Cabella then hit the post from a Javier Manquillo cutback but a rare mistake by Marseille goalkeeper Steve Mandanda — one of the few impressive performers in Michel’s side this season — allowed Rennes to score again just before the hour mark.

Mandanda let a Gourcuff shot slip under his grasp for Rennes’ fourth goal and Sio rubbed salt into Marseille’s wounds when he converted the visitors’ fifth after being superbly set up by Dembele.

Lyon are at home to Nantes on Saturday while Nice face struggling Gazelec Ajaccio on Sunday before champions Paris Saint-Germain, who secured the title last weekend, entertain second-placed Monaco at the Parc des Princes. – Agence France-Presse