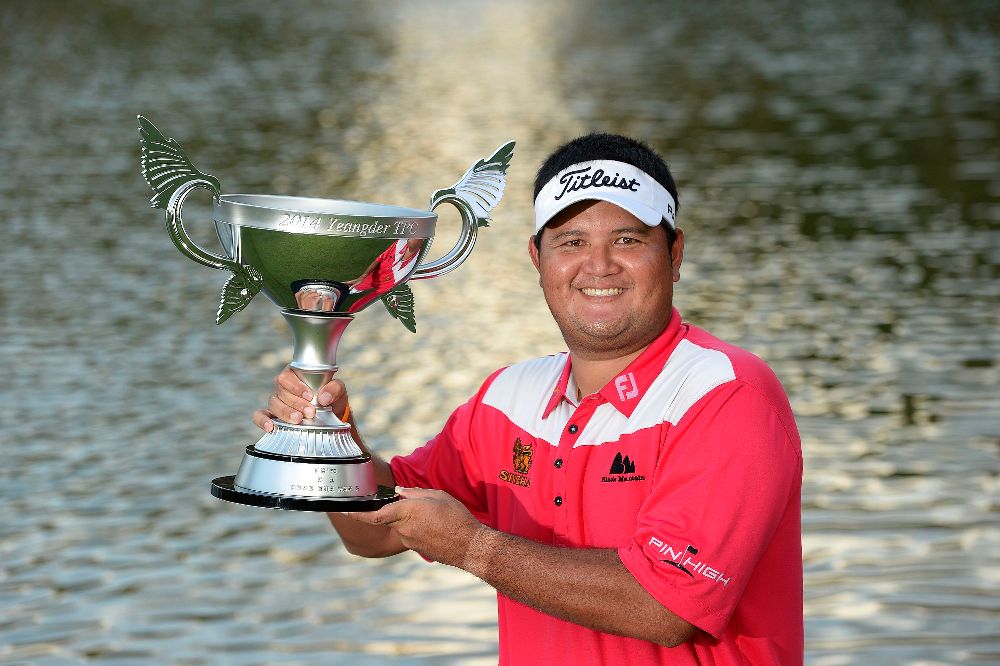 Prom Meesawat of Thailand captured a long-awaited second Asian Tour victory after defeating Miguel Tabuena of the Philippines on the second extra hole at the Yeangder Tournament Players Championship (TPC) on Sunday.

Prom, whose first Asian Tour win was in Korea in 2006, forced extra time when he birdied the last hole for a three-under-par 69 to tie with overnight leader Tabuena (71) in regulation play on 11-under-par 277 in the US$500,000 Asian Tour event.

After shooting matching pars on the first play-off hole, Prom needed three shots to safely find the par-five 18th green before sealing the win with a two-putt par as Tabuena narrowly missed his par putt at the Linkou International Golf and Country Club.

Filipino veteran Antonio Lascuna settled for third, one-shot from joining the play-off, following a 69 while rookie Paul Peterson (69) of the United States, Daniel Chopra (72) of Sweden and India’s Anirban Lahiri (73) finished tied for fourth on 280.

Trailing by two shots heading into the last day, Prom produced a battling performance highlighted by four birdies including a clutch 15 feet birdie on the last hole. His only blemish of the day came on hole six.

“I’ve been waiting for this win for a long time! I am really glad I made it. Hopefully I won’t have to wait another eight years to win again! I will be aiming for a third win now and try to boost my ranking on the Order of Merit,” said Prom, who won US$90,000.

It was a case of third time lucky for the Thai, who is nicknamed the Big Dolphin due to his burly physique and because he hails from the coastal town of Hua Hin, as he lost in a play-off at the Resorts World Manila Masters and Hong Kong Open last year.

“This is my very first win in a play-off! I tried to keep a clear mind when I went for the play-off. I tried not to think about anything else. It’s been a difficult day for everyone but I stayed patient.

“It’s not easy playing on this golf course so I’m glad I did it. Miguel (Tabuena) is a very good player. He has bright future ahead. I hope he gets his win soon,” said the 30-year-old Prom.

The 19-year-old Tabuena was disappointed to drop a crucial shot on 17 after bouncing back from two early bogeys with four birdies on holes nine, 12, 13 and 16 which put him in the title mix.

“I want to thank God for keeping me calm out there. I really fought hard and gave myself a good chance to win. In the end, Prom turned out to be the better player. I gave myself a chance to win in regulation but things just didn’t turn out the way I wanted it to be,” lamented the Filipino.

India’s Lahiri, ranked second on the Order of Merit, struggled due to fatigue as he registered a disappointing 73 after mixing his card with four birdies against five bogeys.

“It was a mixed week – good and bad. I was nowhere near my A-Game or even my B-Game. I made a lot of mistakes but it is still a good week. I really feel that another win is really close. I just need to keep doing what I’ve been doing,” said Lahiri, who finished tied-13th in Switzerland last week.

Scores after round 4 of the Yeangder TPC 2014 being played at the par 72, 7125 Yards Linkou International GcC course (a- denotes amateur):