Home Football Ronaldo ‘sad’ after night to forget at Euro 2016 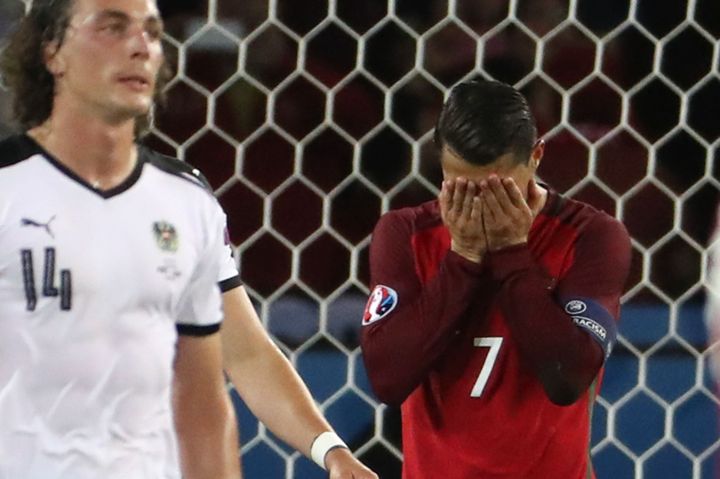 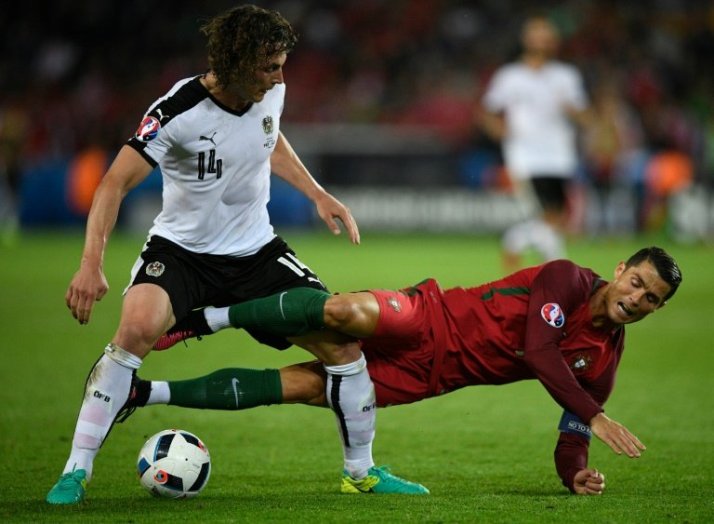 Cristiano Ronaldo crashed a penalty against the woodwork, blowing the chance to write his name into European Championship history, as Portugal stumbled to a second draw against Austria.

Ronaldo was foiled again in his bid to become the first player to score at four consecutive European Championship finals.

He at least set a new national record, making his 128th appearance for Portugal on Saturday to overtake Luis Figo. But the Real Madrid superstar will have bitter memories of the night after missing the 79th-minute spot kick.

“Obviously it was a goal to be the most capped international player, and also to be the national team’s top scorer,” Ronaldo said.

“But obviously I’m a bit sad, because this wasn’t the way I wanted to break this record. The most beautiful way would have been ,” he added shaking his head.

“Obviously it wasn’t something we wanted,” he said of the result. “We had a lot of chances and we did well, but we weren’t able to finish.

“I also missed some chances – a penalty and some other chances. But that’s part of football. We need to continue to believe.”

The 0-0 draw at the Parc des Princes leaves Hungary, who gained a point in a 1-1 draw with Iceland, as the surprise Group F leaders with a game to play. Austria must win their final match to avoid going home.

While it was a frustrating night for Ronaldo, Belgium finally clicked after losing their opener to Italy as they crushed the Republic of Ireland 3-0 in Group E.

Everton striker Romelu Lukaku scored a classy opener and added a second in Bordeaux while Alex Witsel also netted as Belgium finally showed why some observers have tipped them as outsiders for the title.

Despite being outclassed, Ireland and captain John O’Shea expressed confidence they could still beat group winners Italy in their final group game on Thursday to reach the last 16.

“We have a big chance now against Italy,” O’Shea said. “With a bit more discipline and control we can get something against Italy.

“We dust ourselves down, see how everybody is and go for Italy in Lille.”

In Paris, Portugal coach Fernando Santos refused to say how Ronaldo was feeling after his second disappointing display in the tournament.

“I prefer not to talk about this subject,” Santos said.

At the end of the match, Ronaldo made a fan who ran onto the pitch happy by allowing him to take a selfie before the man was bundled away by security guards.

Nani had hit a post before three-time World Player of the Year Ronaldo was left shaking his head in disbelief as he smacked the ball against the base of the post after he had been fouled by Martin Hinteregger.

Portugal need to beat Hungary in the impressive Stade de Lyon on Wednesday to be sure of qualifying from a group that they had been expected to dominate.

Hungary, playing in their first international tournament since the 1986 World Cup, needed an own goal from Iceland’s Birkir Savarsson in the dying seconds to rescue a 1-1 draw in Marseille.

The result keeps both teams’ hopes alive of a place in the knockout round.

A first-half penalty by Gylfi Sigurdsson put Iceland on course for their own fairytale win. But the European Championship newcomers succumbed to waves of Hungarian pressure.

With 88 minutes gone, substitute Nemanja Nikolic sent a low ball into the area and the onrushing Savarsson directed the ball into his own net.

“It feels like a loss, we were so close, we were going for the three points, but we failed to finish the game off,” said man of the match, Iceland striker Kolbeinn Sigthorsson.

Iceland fans were involved in ugly clashes at the Stade Velodrome as match stewards tried to stop them crossing a fence to join their fellow supporters.