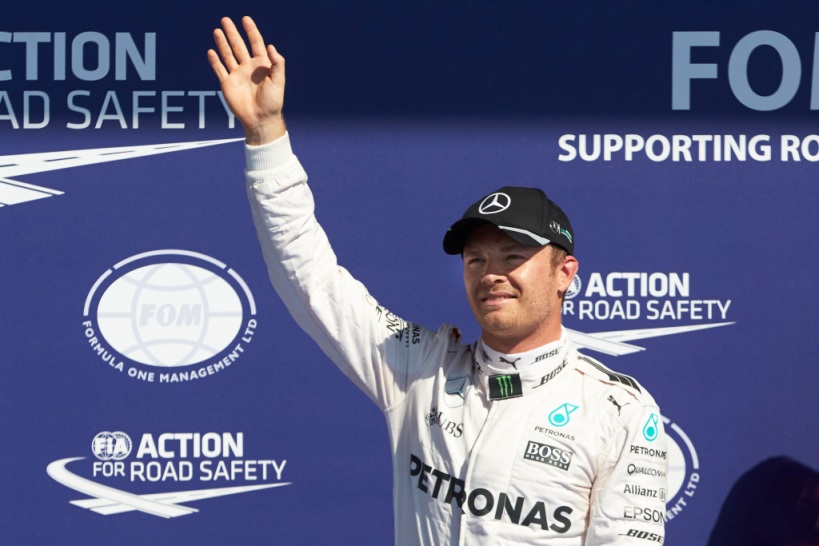 Rosberg’s delight was reduced by his Mercedes team-mate Hamilton’s damage-limiting and thrilling drive to finish behind Daniel Ricciardo, second in a Red Bull, after starting from the back row of the grid.

“I would definitely have taken that before the race,” said Hamilton.

“I am so happy and proud of everyone. I was not expecting it and I had no idea what we were capable of, but I had a positive mental attitude today and it worked.”

Rosberg, 31, who started from his third successive pole position, led from start to finish in a 44-laps race fractured by accidents and incidents to secure his first victory in Belgium and his sixth of the season.

Hamilton, who started 21st after being handed 60 grid position penalties for taking three new power-units through the weekend, remains ahead of Rosberg in the title race with 232 points to 223, a lead of nine.

“It’s been great to get the win today, but Lewis starting at the back made it easier for me,” said Rosberg. “He’ll be back at Monza, as usual, and it will be a great battle and another good weekend.”

Four-time world champion Sebastian Vettel of Ferrari recovered from a first-corner collision with his own team-mate Kimi Raikkonen to take sixth ahead of Fernando Alonso, who had started 22nd on the grid.

Valtteri Bottas was eighth for Williams ahead of Raikkonen and Brazilian Felipe Massa.

Hamilton’s podium finish from 21st on the grid was a record for the circuit on a day of serial incidents, accidents and collisions.

The race was red-flagged after nine laps in the worst incident when Dane Kevin Magnussen crashed heavily but limped away from his wrecked Renault car with only a damaged ankle.

Trouble started right from the outset, however, with Vettel and Ferrari teammate Raikkonen colliding on the first corner.

Another, more alarming, accident brought out the Safety Car itself on lap nine — Magnussen losing control of his Renault as he exited Eau Rouge and smashed into the barriers at around 300 kph on the high-speed rise to Raidillon.

As the debris settled, the severity of the damage to the barriers required repair and the red flag came out to halt the racing with, remarkably, back row starters Hamilton and Alonso -– with a combined total of 120 grid-place penalties -– in fifth and fourth respectively.

The pause allowed the teams to pit their cars for a rolling re-start behind the Safety Car, Rosberg taking medium tyres and most others, including Alonso and Hamilton, taking softs.

By the end of lap 11, Rosberg led by 1.4 seconds and Hamilton was sizing up a pass on Alonso which he completed on lap 12, sweeping by for fourth.

Further back, a bruising battle between Raikkonen and Verstappen saw them bang wheels in a series of scraps, the young Dutchman’s aggression upsetting the Finn whose radio comments required constant bleeps to remove profanities directed at a rival half his age.

By lap 18, Rosberg remained in control, but was aware that Hamilton had risen from 21st to third, the Englishman passing Hulkenberg on the outside on Kemmel Straight.

Rosberg’s lead was 5.5 seconds at half-distance, when Hamilton pitted for a new set of softs. He rejoined ninth, his stop slowed slightly by a rear jack problem.

Rosberg remained in serene control, 12 seconds ahead of Ricciardo, with eight laps to go after Hamilton had made a third stop, rejoined and passed Hulkenberg again in his chase after the leader. – Agence France-Presse